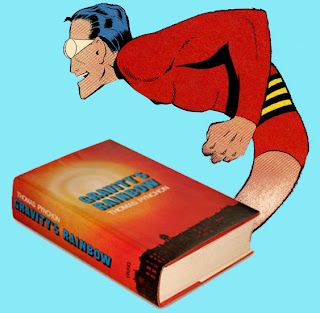 Published in 1973, Thomas Pynchon's massive novel is widely regarded to be one of the greatest works of 20th century literature. Time Magazine included it in its list of "All-Time Greatest Novels." The book is considered to be a landmark work of what is known as "postmodernist" fiction. It plays with the literary novel form itself, much like Jack Cole's comics played with the form of comics. So, it's no surprise to discover that Cole's Plastic Man pops up here and there in Gravity's Rainbow.

In the edition I have, the Plastic Man references show up in four places, on pages 207, 214, 331, and 751. Here's the first reference, which shows that Pynchon has a fine appreciation of the spirit of Cole's character: 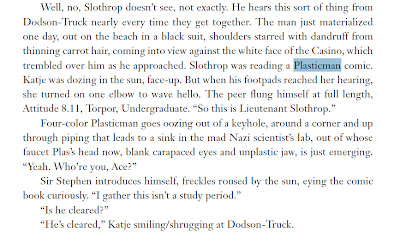 It's interesting, though, to note that Pynchon refers to the character as "Plasticman," condensing the true name of Jack Cole's character, "Plastic Man," into one word. Perhaps this was a strategy to avoid to a copyright lawsuit. The next reference is brief, but once again very much captures the spirit and trappings of Cole's work:

Indeed, Plastic Man, where are you when we need you? A few pages later, Pynchon refers to a "Plasticman sound," which also shows an intuitive grasp of Cole's use of sound effects.

In the last reference, Plastic Man is joined by other golden age superheroes, plus Philip Marlowe, the Lone Ranger and... well... see for yourself: 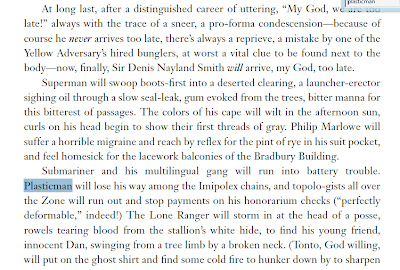 In late 1971, DC published DC Special #15, a terrific reprint of Jack Cole Plastic man stories. This was my first introduction to Cole's work, and may have been an influence on Pynchon during the writing of Gravity's Rainbow, which was first published in 1973.