Here’s yet another Jack Cole story in which he explores death, to the point of actually killing off his hero and following him to the gates of Hell.

Jack Cole signed this story on the first page, a sure sign that he not only performed all the writing, penciling, inking, and lettering on this story, but also that he felt proud enough of it to affix his name to the finished product!

This story is certainly among the best of the Midnight series., and certainly one of the great Hell/Devil comic book stories (a sub-genre in itself) of all time. Bringing his character to Hell was great fun for Cole, who had a field day with his penchant for the grotesque in these pages.

Our story begins with a great opening page, followed by the wacky conceit of a car chase in which Midnight and the pursued crooks taunt each other using car radios! Perhaps they should have paid more attention to their driving… 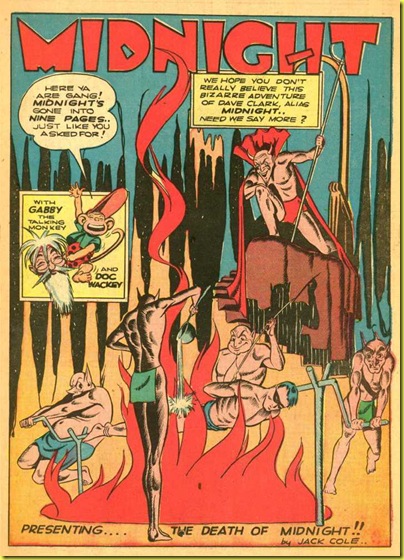 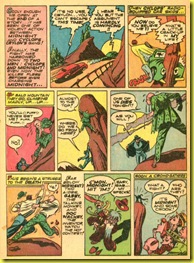 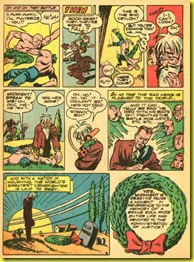 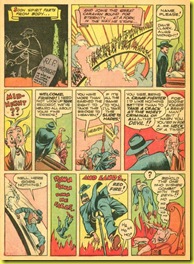 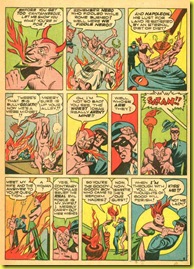 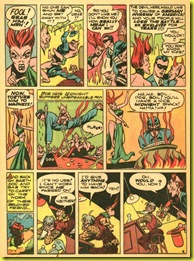 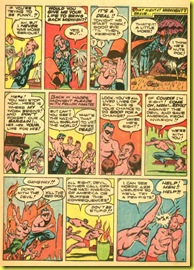 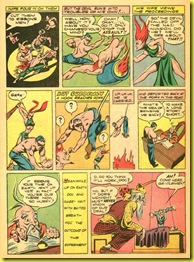 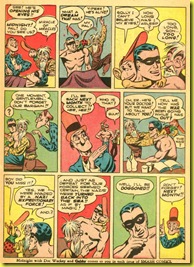 Starting with a hot (if you’ll forgive the pun), splash page, this story delivers a wonderful brew of excellent design, great writing, and some of Cole’s keenest satire to date.

Cole loved to draw fire and flames. Many of his early stories shine brightly from the glare of monstrous flames leaping off the pages.

In Cole’s universe, Satan isn’t such a bad guy, after all… it’s the fiery red-head he’s married to that’s the real problem! Cole manages to make Satan’s wife look both shrewish AND sexy. It’s interesting to reflect that Cole, with his puritan, wholesome upbringing depicted Hell as a place where the misery could be traced to a woman. Notice how her hair resembles fire, a great design touch. Also that her dress is green… the traditional complimentary color for red-heads. I’m guessing that Cole had a hand in the coloring of this story, as well. Midnight’s cool blues work in contrast to the warm reds and oranges of Hell.

By the time Cole created this story, World War Two was in full swing. Hence, the topical reference to the Nazis.

Cole prefaces the story on the splash with an admonition not to take the story seriously, supposedly letting us know this is an imaginary tale outside the continuity of the series. But it matters little, since Midnight is actually brought back to life by a mysterious stranger.

Cole uses this mysterious stranger as a way of linking this story with the next, a device he would also use again in Smash Comics 38. For now, you can read the “sequel” to this amazing story – a story that is perhaps even more wonderful than this one – here, in an essay written several months ago looking at how Cole depicted speed on paper.