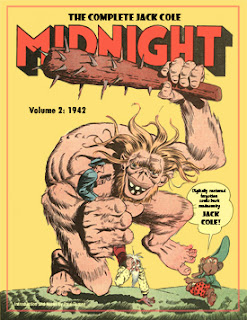 I'm very excited to share this collection, as it contains some amazing stories and art by the great Jack Cole. In this book, Midnight encounters insane Nazis in Iceland, a lost tribe in the Florida Everglades, real-life Hollywood starlets, human-made freaks, and even the Devil himself!

This 115 page eBook in .CBR format provides all the Midnight stories of 1942, along with all the covers of Smash Comics from 1942, including two great covers by Jack Cole himself! In addition, the book includes two of Jack Cole's extremely rare Dickie Dean-Boy Inventor stories from 1941, which show Cole's rapid development in 1942.

The book includes a 5-page introduction and 14 pages of detailed story notes by me. I've taken some time to create attractive layouts and organize my analysis so that it's informative and enjoyable to read (hopefully!). 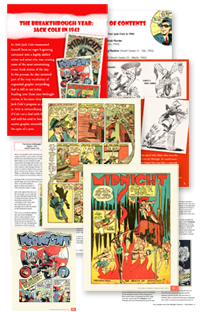 In 1942, Jack Cole came into his own as a master of the medium of sequential graphic storytelling. No longer jumping from publisher to publisher, Cole had found a stable berth at Quality Comics, and even moved to Stamford Connecticut, where the Quality offices were located (my intro includes a rare photo of the building that housed the Quality offices). Within this framework of stability and rising success, Cole developed confidence and deepened his skills.

However, even as Jack Cole and American comic books gained a solid footing in 1942, the world was facing the de-stabilizing spectre of Nazi Germany and Hitler. Even though Jack Cole was not political, the menace of the Nazis pervades his work of 1942. In one story, Midnight goes to Hell and rouses the "inmates" there to overthrow a Nazi invasion of the United States.

I've spent weeks restoring these pages to make them as clear and readable as possible. My goal has been to remove the obstacles of age and deterioration so that these amazing stories can be easily enjoyed by all.

I have some great new Cole finds to share soon. Stay tuned!