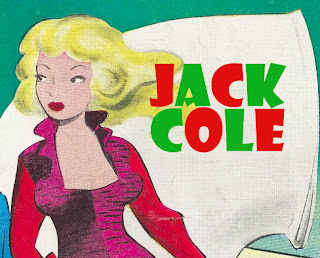 Well, fellow denizens of the dank, dusty, delirious world of old comics, it's been a fun 12 days. Every day, I've shared with you some Jack Cole cartoons and comics that are new to Cole's Comics -- and, in some cases -- pretty much new to the world. As a grande finale, here's a big pile o' Cole for your enjoyment, with notes and the usual kerfuffle.

Here's a set of Cole gems from a 1955 H-K Publications Digest. The fellows who ran H-K turn out to be same guys who published Centaur comics, where Cole started his comics career 16 years earlier. Was there a connection? Did Cole look up his old associates and sell them some cartoons? Possibly.

First up is yet another of Cole's "searchlight" cartoons. We published one yesterday, as well.


In case the joke eludes you, it's a reference to a standard song called Chlo-e (Song of the Swamp). Debuting in 1927, the song describes a lonely fellow searching for his Chloe in "the dismal swampland." Click here to hear Eva Taylor's 1928 recording of the song. And, for a piece of sublime surreal screwballism, check here's Spike Jones' deconstructed version from the 1945 film Bring On The Girls featuring the brilliant Red Ingle:


If you happen to be a fan of novelty songs, I recommend checking out Red Ingle (there's a bunch of his songs on Spotify). His recording, Serutan Yob is one of my favorite things, although it appears to be mostly the brainchild of comic genius Jim Hawthorne. But, I digress...

Getting back to Cole, the March, 1955 issue of Smiles featured nine Jack Cole cartoons! Here's another from the same issue, a comic reversal with a strong composition:


Among the Cole cartoons in this issue is this "go peel a watermelon" two-page gag that ran underneath some text jokes and another gag. Many of the H-K digests of this period had 2-page spreads like this, created by various artists. I dunno about you, but I could stare at that graceful peeling for quite awhile.

Ger Apeldoorn (see his great blog) has suggested that the H-K Cole cartoons might actually have been done to order, from presentation sketches Cole submitted in person. This was a common practice, and many publishers had an open house one day to the week where they would see cartoonists in person, review sketches, and (if the cartoonist was lucky) select some for finishing and purchase. I've been thinking that perhaps the piles of Cole cartoons in H-K were rejects from other mags, but perhaps not. The above cartoon, which is obviously tailored to the magazine's format and needs, suggests Ger is right.

Here's another from the same issue:


And, another -- a beautifully composed and rendered gag that, in lesser hands might not be as funny:

The last cartoon found in this issue is a goodie, with a a great gag and a Plastic Man style face distortion:


Before we sign off the 2012 12 Days of Cole-Miss Event, here's a few more colored Cole Humorama cartoons, recycle as covers of early 1960s issues of Popular Jokes. These came to me as a wonderful holiday gift, from our friend Ger Apeldoorn, who received them from comics researcher Banks S. Robinson. Thanks, Ger and Banks!


And lastly, here's one I found on the Web:

And that wraps up the 12 Days of Cole-Miss! Over the last 12 days, with the kind help of some friends, I've shared 15 new pages of Cole comics and 24 rare Jack Cole cartoons. I hope you've enjoyed it all as much as I have -- or, if you are coming to these posts post-holidaze 2012, I hope you'll click on the links below and check out some of these swell cartoons.

The 12 Days of Cole-Miss Postings: