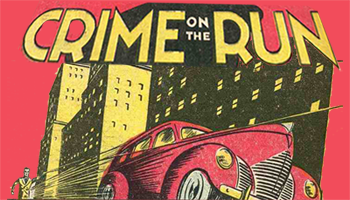 Story presented in this post:
Blue Ribbon Comics #3 (Archie, Jan 1940) Crime on The Run (Story and art by Jack Cole)
In his second and last CRIME ON THE RUN story, Jack Cole delivered a wholly engrossing and exciting story. This time, the setting is in 1932 Los Angeles. As with the first story, Cole has made an effort to capture a few period details, as shown in the 1932 LA Times photo below of an LAPD policeman and plainclothes homicide detectives. Cole got the 3-piece suit right, although he gave his policemen jackets, which appears to be incorrect, based on this photo. One of his detectives has a pencil thin mustache, just like the detective in this photo. 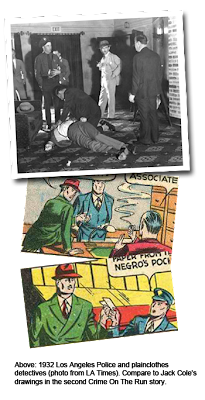 Crime stories were already a big part of American movies and radio by 1939. The famous gangster film, Scarface, came out in 1932, and a chain gang of gangster films followed in its bloody footsteps. Lucky Strike cigarettes sponsored a popular nationwide radio program in ther 1930's dramatizing true life FBI cases. Cole was perhaps a bit ahead of his time by bringing the winning combination of moralism and graphic violence to comic books. Generally, the popular wave of American crime comics is considered to have begun in 1942, with the start of Charles Biro's Crime Does Not Pay series. (By the way, Biro drew the cover of Blue Ribbon Comics #3, a superhero scene, from which this story is taken).
As you might expect from Jack Cole, this story has a few quirky details. In the opening pages, the criminals are particularly sadistic. There's some great dialogue, including a detective referring to the criminals as "gold thirsty dogs," which I think would make a great title for a crime novel. On page 3, one of the criminal gang is revealed to be a black man, who is immediately shot to death and referred to as "the negro." Check out the cool drawing at the top of page 6 in which we get an aerial view of the climactic car chase. It was drawings like this that set Jack Cole above most of his peers. Cole was completely committed to the story.
The story delivers quite a bang when one of the victims of a bank robbery becomes so enraged, he grabs a gun, kills two of the criminals and chases the rest down the street. Look at how in this sequence (on page 3), Cole expands the panels out and pulls the camera back to sweeping long shots to emphasize the drama of the action. Cole would return to the true crime venue in 1947, designing and editing True Crime Comics (Magazine Village), in which his own stories would stand out as highlights of comic book history. In this January 1940 story, Jack Cole's gift is starting to accelerate and crime is literally on the run!