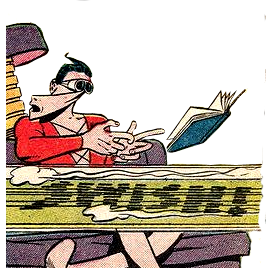 One of the hallmarks of the comic book work of Jack Cole is his seemingly inexhaustable ability to invent ways to depict three-dimensional movement on the static, two-dimensional printed page. Cole's comics are all about speed and movement. Consider some of his early creations: THE COMET and THE SILVER STREAK.

In his mature work, of which the story from Police Comics #95 (1949) presented here is a prime example, Jack Cole infused nearly every panel with something to indicate motion. He used anatomical distortion, speed lines, multiple images, blurry images, puffs of smoke, and the displacement of objects to suggest motion.

Sometimes, he even used the body of Plastic Man himself, stretched and twisted in reaction to the bullet-like propulsion of another character, as though the very air were being pushed back so forcefully that it pulled Plastic Man's body like a Jello sculpture inhaled by a vacuum cleaner.

At times, the images begin to resemble the deconstructionist/cubist artwork of the early 20th century. Compare the Pablo Picasso painting below, Girl With Dark Hair, and the panel taken from our featured Cole story at the top of this posting. 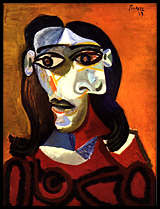 Jack Cole fan and expert, Art Spiegelman drew a marvellous cover for the April 17, 1999 issue of The New Yorker (which included his landmark essay on Jack Cole, later expanded into the totally awesome book, Jack Cole and Plastic Man: Forms Stretched to Their Limits) which gets at the same point. 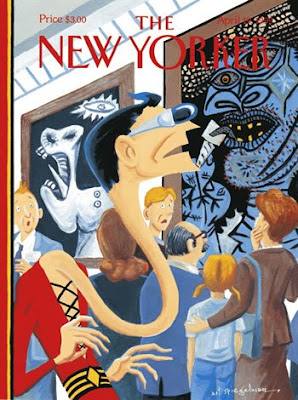 Cole's art sometimes transcends the plot, and becomes a surreal excursion into what the world would look like if you could freeze-frame it and then make it two-dimensional. In some of his work from the late 1940's, I can't help but marvel at Jack Cole's miraculous drawings that showed several moments in time in a single panel. One thinks of Marcel Duchamp's famous painting of 1913, Nude Descending a Staircase. 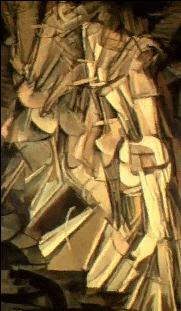 High-falutin' comparisons to famous fine art, aside, the effects of motion and speed in Cole's comic book art are just plain fun to look at. Somehow, by showing the characters of his stories in motion, the stories become even funnier. We get a sense of what the character's body language is saying, which is often in comic contrast to their dialogue. Compare the self-proclaimed mastery of power of the villain's dialogue in the story presented here with his baby-like body movements.

I think Cole might have been a great animated cartoon director, if he had chosen to go that path. In his comic book work, he came to think in terms of motion, not static images stuck in square boxes. By the late 1940's, Cole routinely worked on a lofty level of graphic sophistication that few others have ever touched.

In December of 2008, the perpetually pleasing Pappy's Golden Age Comics Blogzine posted one of the greatest examples of Jack Cole's speed on paper, the Plastic Man story from Police Comics #95 (1949). Thanks, Pappy! View it here.