Note: For more articles in my ongoing series on Jack Cole’s influences, including The Marx Brothers, the Landon School of Cartooning, and Bill Hollman (Smokey Stover), please see here. 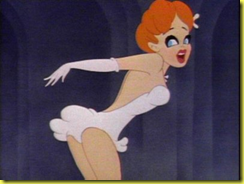 There is little doubt in my mind that comic book master Jack Cole was heavily influenced by the master of another medium, Tex Avery.  An avid moviegoer, Cole would have seen Avery’s short animated films, such as the sexy Red Hot Riding Hood, probably more than once.  A handful of Avery’s cartoons featured the sexy singer in unforgettable sequences, usually animated by Preston Blair.

Sexy women populated the pages of 1940’s comics, but there is a special similarity between the way Avery and Cole ascribed potent, mythological status to their female sirens. Both artists mined a rich vein of humor in exaggerating the near-helplessness of men when confronted with the objects of their sexual fantasies.

There are many examples of men kneeling at the foot of feminine sexuality in Cole’s work, but perhaps his story from Police Comics #51 represents the most potent example. Here is the splash from that story:

Tex Avery’s cartoons are filled with astounding exaggerated reactions. Consider the distortions in this frame from Dumb-Hounded (1943). 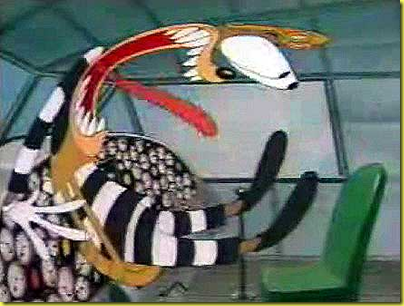 Look familiar? It should. Here’s an image from the first PLASTIC MAN story, one of the first of perhaps thousands of such images Cole made: 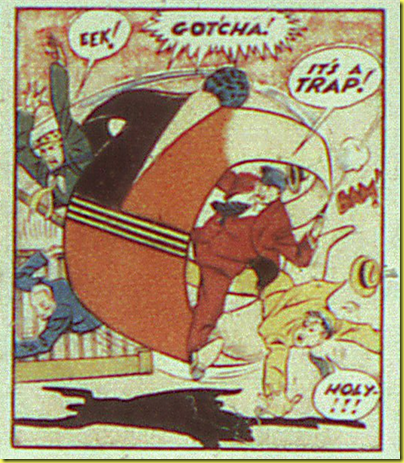 Both Avery and Cole’s work feature some of the most outrageous and comic distortions of the human shape that can be found in popular culture.

It’s my own theory that Jack Cole had the idea to translate the aesthetic and effects of animated cartoons into comic books. I think it’s quite likely he created Plastic Man in the spirit of the cartoons he loved, including Tex Avery’s mini-masterpieces of madness. 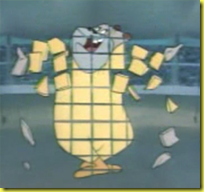 Here’s another classic Tex Avery take, the “crack-up",” which he used in numerous cartoons. After being hit by something, a character would develop a network of cracks and then fall to pieces with the sound of glass breaking. Amazingly, I ran across a similar effect in one of Jack Cole’s WINDY BREEZE 1-pagers: 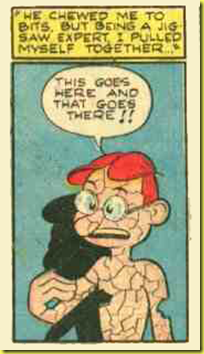 Jack Cole has put his own spin on this visual gag, making Windy a human jigsaw puzzle, an image that works on several different levels.

Years later, in July, 1958, Playboy magazine published a cartoon by Jack Cole entitled Enigma. It used the same concept. Here’s a scan of the original art: 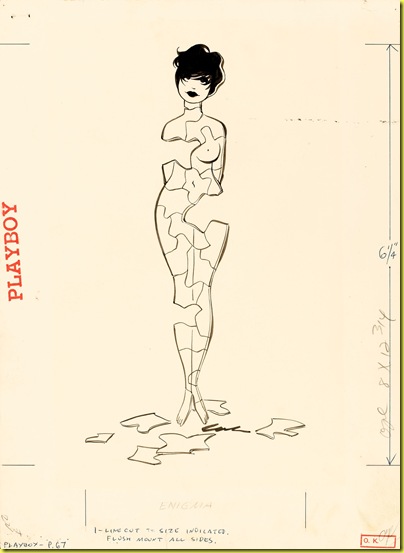 The cartoon was one of a famous, well-received series called Females by Cole. In this cartoon, Cole combines the humorous Avery-style take with the Avery/Cole/Playboy sexpot to achieve an image that is both titillating and humorous. Here is an earlier draft of the cartoon, with a light-haired lass: 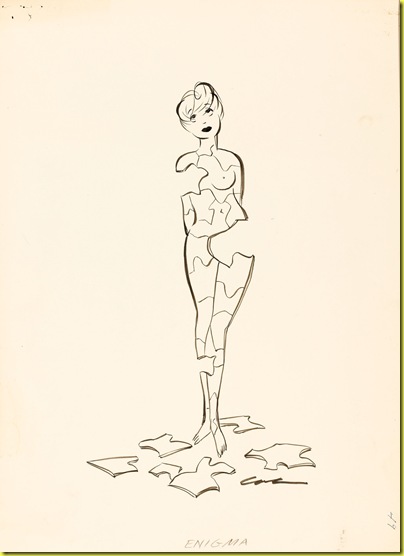 The cartoon evokes the sense that yes, women are puzzles for men to figure out. But it also works against the grain of that gag, suggesting the fragility of women. Cole deliberately drew some of the pieces on the ground, suggesting we are looking at a freeze-frame image of a person about to totally fall apart into a heap of fragments. Here is a second earlier draft, with a different, but equally exquisite face: 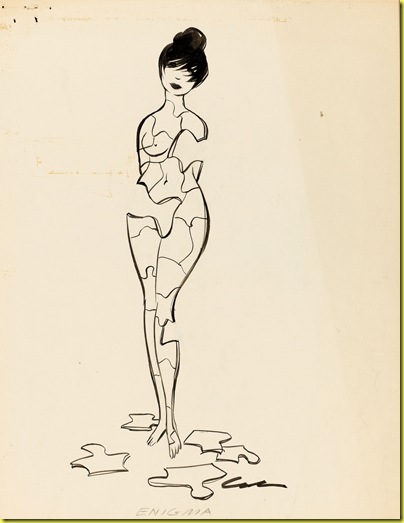 The issue of Playboy (July, 1958) that had Enigma in it was on the stands the day Jack Cole fell apart and took his own life. In this context, Enigma is not only a universal statement, it is also a highly personal message. But for all this, in the end, it is a good cartoon by a master of the form. Like Tex Avery, Jack Cole was always from the first to the last, an entertainer.