Before we begin, I’d like to wish everyone a happy holiday and a new year. I’ve scoured the comic book stories of Jack Cole, but can find no story set at Christmas time, or using a Christmas theme. I guess this just proves that Jack Cole’s concerns were not in the realm of the warm and fuzzy! Now, on to the goodies!

When you think about it, given comic book master Jack Cole’s bent toward death and the tropes of violent crime and execution, it’s a wonder he didn’t create a story like this one sooner.

My guess is that Cole conceived of the series as a light-hearted satire and very deliberately kept it there for years. His dark side crept in plenty in the early stories, but the circumstances were so over-the-top that it was impossible to dwell in the shadows of the early Plastic Man comic book stories – they were just too much fun.

Cover of Police Comics #94 by Jack Cole and Alex Kotzky 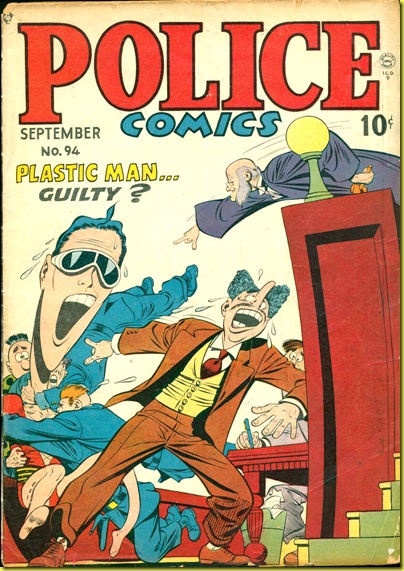 By 1949, however, Jack Cole’s mind seems to have taken a deliberate turn into darker and darker alleyways of human events. In “The Dictator of Dreams,” Police Comics #78, Cole took us on a journey through the interwoven nightmares of four people, in pages loaded with surreal imagery from the more horrific areas of the collective unconscious. (To read this story, please click here).

Sixteen issues later, Cole – working now in an 11-page format instead of the lavish 15-page length he had been given over the last few years, the biggest page count of any continuing comic book hero of this era –- has become even darker, to the point where he begins this grim story with a scene of Plas being horribly executed in a gas chamber. 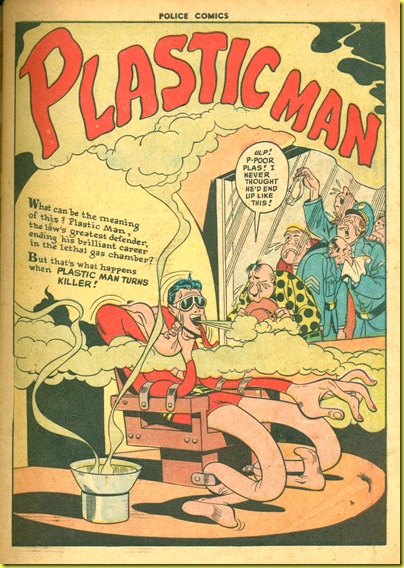 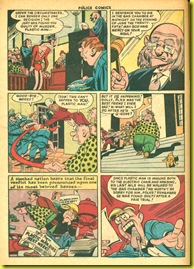 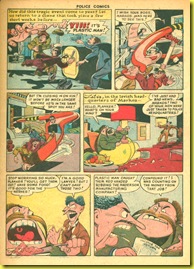 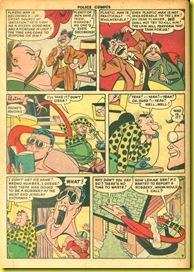 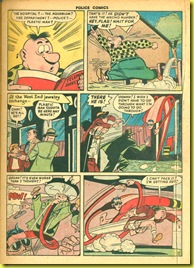 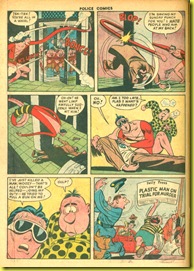 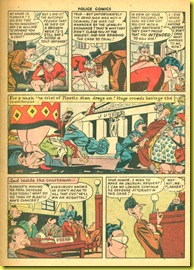 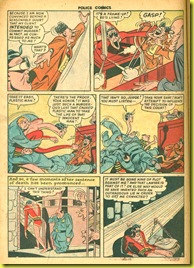 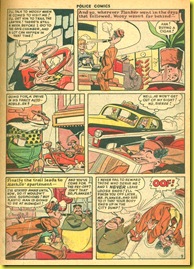 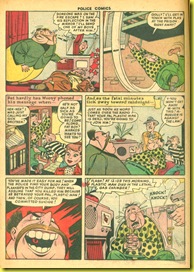 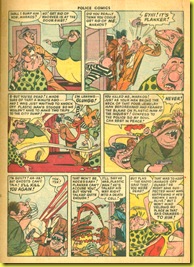 Jack Cole’s trademark themes of death and shifting identities form the basis of this strange story. Plastic Man’s usual carefree attitude towards life is clouded over when he thinks he has killed someone. (Thanks to reader oeconomist.com for pointing out the frame-up).

In this regard, this story a rarity, and an instance of Cole really pushing the boundaries, as he did in his infamous “Murder, Morphine, and Me” story from 1946 (True Crime #1).  By 1949, the comic book super-hero genre had an unwritten law that no hero could kill a crook, even if it was faked. Even the early Batman was known to occasionally pull out a gun and SHOOT the villain, but that all-too easy solution quickly vanished in favor of extended fist-fights in surreal settings… a much more highly ritualized encounter more suited to the hero myth.

This Plastic Man episode is not without its humorous moments, though. The middle tier on page seven, in which a crowd gawks at Plastic Man on trial is quite funny, with a fat lady standing on a cop’s head in her stocking-clad feet. The crazy ways Woozy shadows the bad guy on page 9 are great comedy.

I’d like to quote from the insightful comments of one reader (Tamfos):

“Plas has reached an alltime high in elastic comedy here, keeping pace with the extreme nature of the storyline. Obviously, this is at least partly due to Cole's style evolving to the point where even the bizarrely malleable antics of the "normal" people seem perfectly acceptable (witness the last panel of page two). Just gorgeous stuff.
And, of course, Cole still can achieve so much in a single panel. Witness panel three on Page Four. Plas is reading, AND attempting to answer the phone, while Woozy slaps Plas's hand away AND answers the phone himself. Any other artist, that's at least two panels.”

The drawings are quite stylized, showing that Cole never stopped growing and changing as an artist. His drawings of the various villains in this story, and even the reofrmed crook who appears at the beginning, are as bizarrely compelling as anything Chester Gould (Dick Tracy) ever did.

Jack Cole kept finding new ways to stretch Plastic Man’s body. In this story, made after 9 years of working with this character, Cole ends with the tour de force image of Plastic Man holding his own head, perhaps a macabre echo of the execution that was narrowly avoided!