Jack Cole was an inventive writer as well as an innovative artist. In his wonderful book, The Steranko History of Comics Vol. 2, Jim Steranko quotes Quality Comics publisher (and Jack Cole’s employer for most of his comic book career) “Busy” Arnold:

“With the exception of Jack Cole, none of my freelance artists were much good on stories.” (page 92).

Given Cole’s recognized ability as a writer and story man, it’s not outside the realm of possibility that he may have occasionally written a story that some other artist drew. Well, dear reader, I am pleased to report that I think I may have discovered an early example of this, and what a wild example it is! But first, we need to briefly look at the mystery of George Nagle. 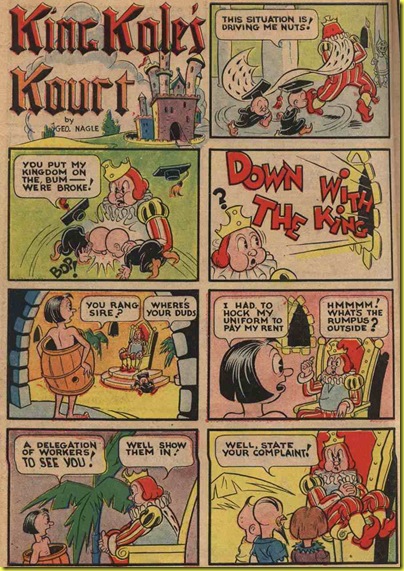 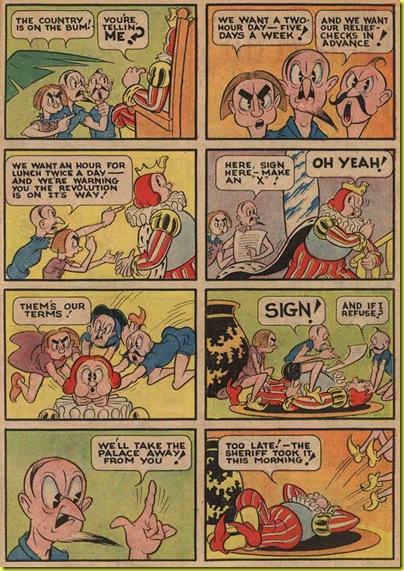 How do we know the above is by Jack Cole? Jack Cole’s work is all over Blue Ribbon #1, with four separate stories. Two of them are signed by Cole, one is unsigned, and the fourth (above) is signed “George Nagle.” To me, the art is unmistakably Cole. Compare these two panels: 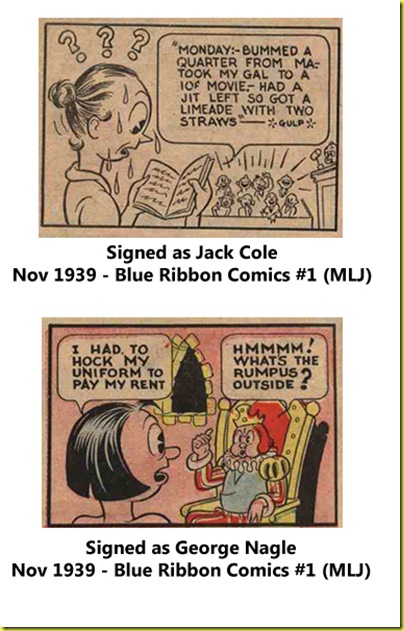 (Note: the upper panel from the illustration above from Blue Ribbon Comics #1 is excerpted from “Ima Slooth,” a wonderful 3-page story that can be read here) The device of positioning a character’s head in profile on the left or right side of the panel was a favorite layout of Cole’s, and he used it throughout his 16 years in comics. However, others used this device as well.

Further evidence lies in the fact that the heads in the two panels are very similar, with very large eyes, “pie slices” out of the retinas to indicate the direction the character is looking in (as device Carl Barks also used), and matching shapes of the heads and mouths. The lettering, the rounded-corner speech balloon, and line quality are also the same. Therefore, “George Nagle” is a pen name for Jack Cole.

In the 1938 Cocomalt Big Book of Comics, there is another “King Kole’s Court.” Note this one is also attributed to “George Nagle,” but is signed in the last panel by Jack Cole. 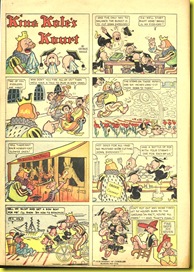 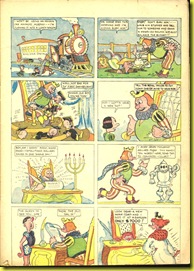 The mystery continues, however, as one considers that George Nagle was listed as associate editor and managing editor for various comics assembled by the Harry Chelser studio. At this time, I can find no biographical information on Nagle, but I will keep digging. It would appear that Nagle probably wrote the “King Kole’s Court” stories and Jack Cole drew them. However, this is not a certainty.

In Blue Ribbon #3 (Jan 1940), a story appears that is signed by “E.M. Ashe,” with “Story by George Nagle.” The wildly imaginative and darkly bizarre subject matter of this story certainly seems to fit with Cole’s aesthetic.

The artist of this story, E.M.Ashe is Edmund Marion Ashe, also known as Edd Ashe. A key artist in the early MLJ/Archie books such as Pep, Top-Notch, and Blue Ribbon Comics, Ashe is best known for drawing Don Winslow of the Navy (Fawcett) for many years.

There were two “Devils of the Deep” stories. The first appeared in Blue Ribbon #2. It was a standard fist-fighting hero story of the time, bereft of anything interesting. It’s not clear who wrote or drew this first episode. Here’s the first page: 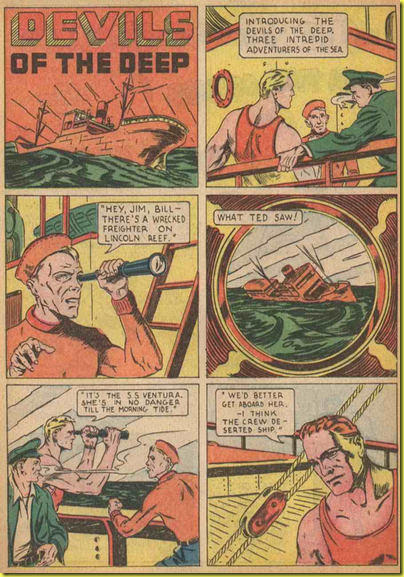 The second (and last) of the “Devils of the Deep” stories, however, is something a little special. The story has completely ignored the “three intrepid adventurers of the sea” from the first story and instead focuses on a criminal, a favorite subject of Cole’s at this time. Note the credit to George Nagle at the top of the first panel. The story begins with a bit of introductory narration, a device that Cole often used to open his stories. 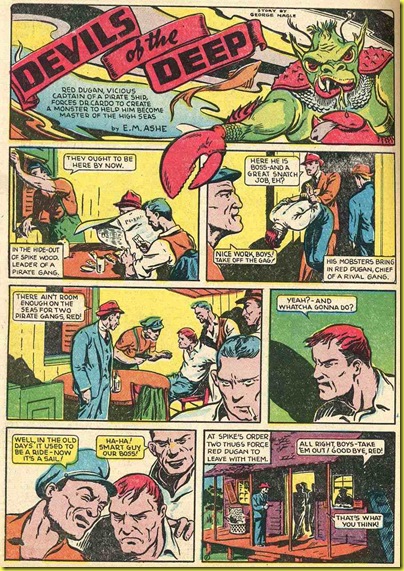 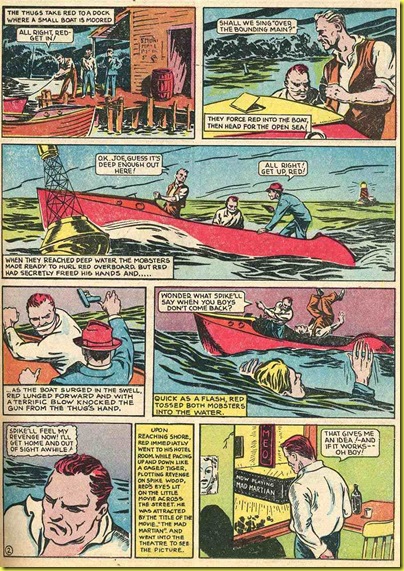 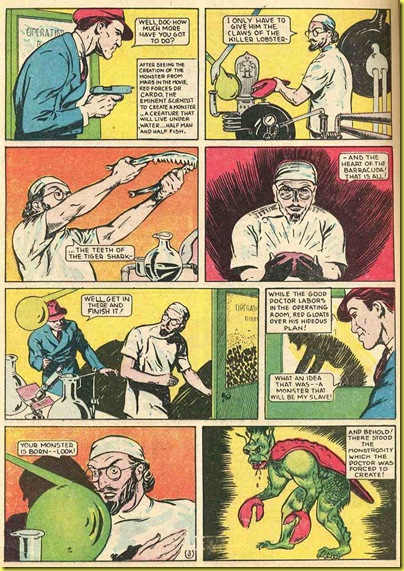 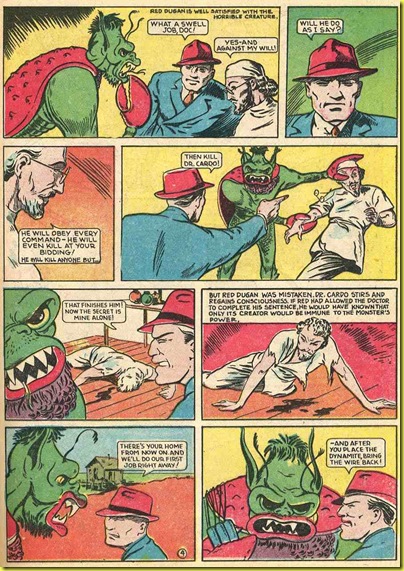 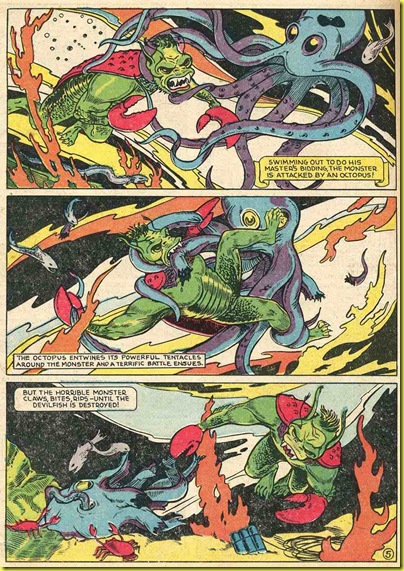 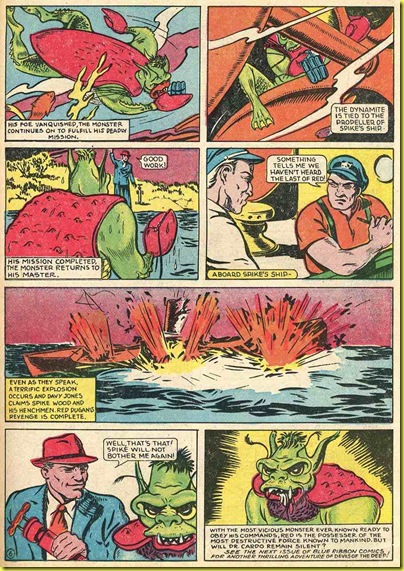 This is a wholly original, offbeat story concept. Even the clumsy delivery doesn’t obscure this story’s inventiveness and sheer jaw-dropping oddness.

Interestingly, in August of 1940, Theodore Sturgeon’s landmark monster story, “It!” appeared. In 1942, Airboy Comics would feature the morally ambiguous monster character THE HEAP, inspired by Sturgeon’s story.  The 1970’s brought us SWAMP THING and MAN THING (who appeared in the amusingly named book Giant Sized Man Thing). Before them all, though, came Cole’s “Devil of the Deep.”

The fact that the story is not a heroic tale at all, but instead focuses on the criminal is a dead giveaway that Cole made it up. When he would leave MLJ in a couple of months to work for Lev Gleason and edit Silver Streak Comics, Cole would create THE CLAW, again emphasizing the bizarrely interesting criminal over the hero. The “Devils of the Deep” story may be the first time Cole played with the idea of a fantastic story with a criminal as the lead character.

The fact that people die violently to slake a thirst for vengeance is another trait of Cole’s early stories.

The unusual three- panel fifth page action climax is similar in concept to the memorable four-panel page from a COMET story written and drawn by Jack Cole (to read the whole story, click here) of the same time period: 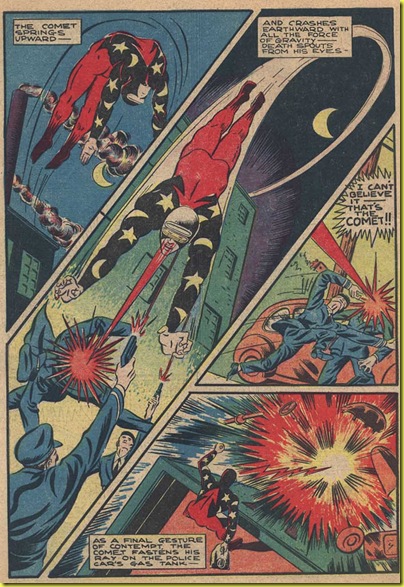 I think it’s very likely that Cole wrote this story. Consider the writing in the amazing sequence from page 3:

“The claws of the killer lobster! The teeth of the tiger shark! The heart of the barracuda!”

The sequence is highly visual, and has a rhythm, indicating a writer who thinks visually. More importantly, it has that crazy vitality and feverish imagination that is a hallmark of Jack Cole’s work. It also has a dreamlike logic, characteristic of Cole’s best work. When you first read it, you totally buy in. It is only afterwards that you start to realize there are no killer lobsters, or wonder why the heart of a fish would be so fierce.

Despite the promise of a follow-up story in the last panel, this nightmarish narrative was the last appearance of this extremely short-lived series. It’s a shame there weren’t more “Devils of the Deep” stories.  It would be fascinating to read a series in which a criminal controls a killer lobster man.

In the last years of his comic book career, Cole would explore the man-transformed-into-monster story concept in some of his Web of Evil stories, including his very last story, “The Monster They Couldn’t Kill.”

So is this “Devils of the Deep” story written by Jack Cole or by the editor George Nagle? Probably the latter, but given the familiar themes and wild imaginings of this story, and the connection between Cole and Nagle in other work, one can’t help but wonder.

PLASTIC MAN begins life as a criminal who undergoes a physical transformation, and it’s here – in 1941 --  that Cole refined concepts such as the ones that lie at the heart of this tossed-off trifle, and struck story gold.