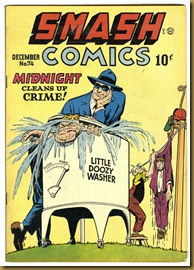 “Masked Mayhem” (my title)
Story and art by Jack Cole

For such a seemingly mild-mannered guy, Jack Cole was pretty subversive in his creative expression. He not only pushed the form of comics into new directions, he also pushed the content of comic books in the 1940’s.

His greatest creation, PLASTIC MAN, was itself a parody of the super-hero genre that defied the story-forms conventions and moral standards. Plastic Man started out as a crook and, for his first dozen or so adventures, kept functioning as a crook – breaking the law with a jester’s playfulness while he also saved the day as Plastic Man. When you think about it, these stories turned the hero concept inside out, which may be part of the unique appeal of the series. 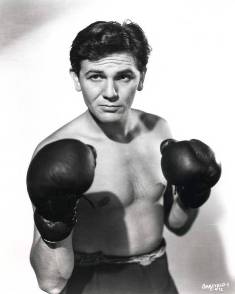 In his seventh MIDNIGHT story in his second run on the series, Cole subverts the classic boxing/fight story-form. The boxing movie has been a Hollywood staple for over 50 years, with films like Raging Bull, Million Dollar Baby, and most recently The Fighter.  In 1947, the year Cole wrote and drew this story,one of the big hit movies was Body and Soul, starring John Garfield (pictured left). In the film, Garfield becomes involved with fight promoters who are crooked and corrupt. Ernest Hemmingway wrote about rigged fights in his great 1927 short story, “The Killers,” which has been adapted into a movie four different times (so far).

By 1947, the story-form of the rigged fight was predictable enough that Cole could parody it in his Midnight story. No doubt, Cole was inspired by the great work E.C. Segar did in Popeye with his numerous parodies of boxing matches and fights. He starts the story with a comic reversal, showing a man with a massive, rugged fighter’s body and the sensitivity of a child… 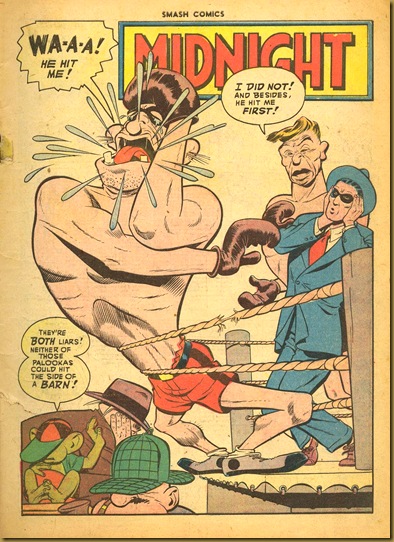 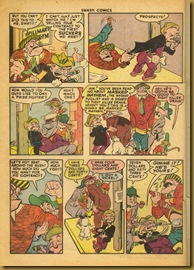 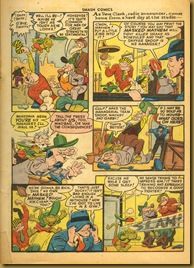 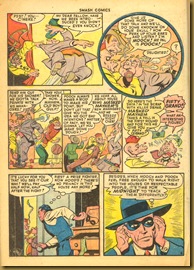 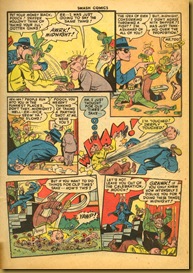 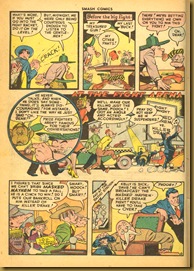 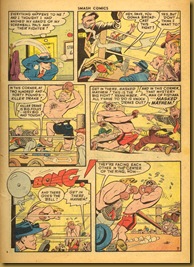 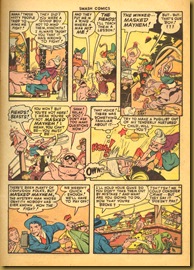 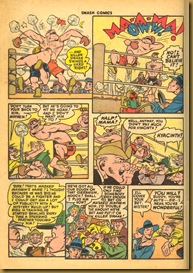 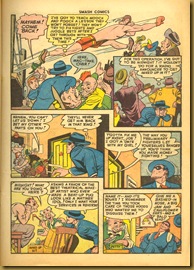 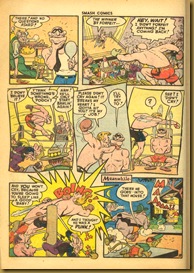 Cole ends the story on a subversive note, with our hero, Midnight, actually holding up the crooks at gunpoint!

It is also of passing interest to note that this story is also yet another in a long series of Jack Cole stories that play with the concept of shapeshifting…. in this story, Midnight is almost interchangeable for Plastic Man in his ability to change his appearance.

Sadly, like many of the later Midnight stories, there seems to be something lacking in the energy of the story. Still, the art is terrific and the storytelling is masterful. Check out this lovely panel from page six that features a classic Jack Cole city scene: 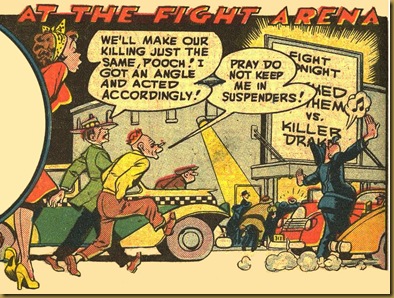 The book includes Cole’s first 12 MIDNIGHT stories, pages of notes and analysis written by me – Paul Tumey, and additional bonus material, including his wonderful single Quicksilver story from 1941. I have carefully restored the pages and put it all into an attractive unified format with archival notation and quality. I think that this is probably the best digital representation of this classic work available at this time.

Please note: Orders filled within 24 hours. Because this file is large, it is necessary for me to email you the file myself in order to avoid costly storage and data transfer charges. This keeps the price very low for you, but please be patient as I will need to check email and fill orders manually. Thanks a million for supporting this blog!

This is a great way to support this blog and get some great reading for cheap!