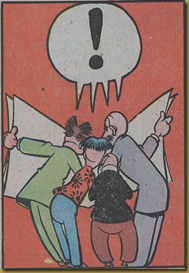 Jack Cole created hundreds of genuinely funny one-page comics for Quality Publications in the 1940’s. In these one-pagers, Cole loved to play with double-meanings and the surreal images that resulted. In many ways, they are an extension of the gag humor style Cole based on the newspaper screwball strips, such as SMOKEY STOVER by Bill Holman (see my post on Holman’s influence on Cole here).

Part of Cole’s greatness was that he married the screwball “bigfoot” humor style and the 1940’s comic book superhero into stories that were both thrilling adventures and surreal, wacky comedy. In his Quality one-pagers of the 1940’s, you can see Jack Cole at his loosest, most fertile. He often warmed-up to his longer comic book stories by knocking off these one-page delights. Sometimes the gags are flat, sometimes the humor is too bizarre, and sometimes Cole’s pacing and art is just too sloppy to make much of an effect. 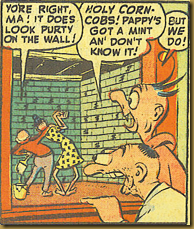 But sometimes, and more often than you’d reasonably expect for a guy carrying the creative workload Jack Cole had in the 1940’s, these tossed off one-page fillers that were buried in the back pages and which never really earned Cole much attention (or money) at all – are flashes of brilliance.

Here’s a few one pagers that are new to this blog, mined from new scans that have surfaced lately. Many thanks to the original scanners.


Hit Comics 22 (June, 1942)
A very typical Jack Cole comic of the early 1940’s, with humor wrapped a core of sadism. I really like the looseness of the art.Probably due to the fact that Cole had very little time to work on these pages. At this time, Cole’s PLASTIC MAN was taking off, and he still had his MIDNIGHT duties, as well as the several other one-pagers like this one he produced for Quality Publications every month. 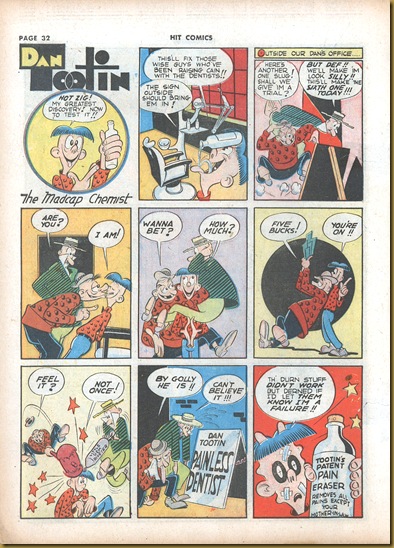 Hit Comics 26 (Feb. 1943)
A great example of Cole playing with words and generating a bizarre, surreal image as a result. 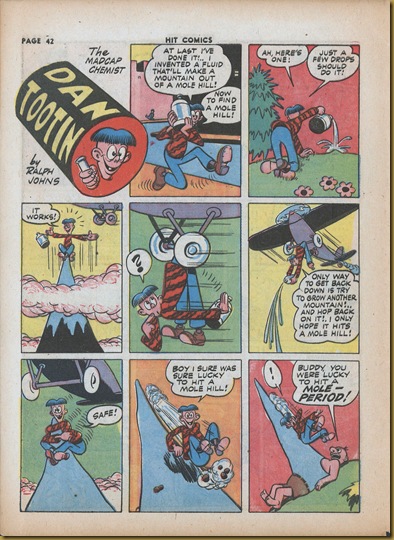 Hit Comics 27 (April, 1943)
Cole’s style just gets looser and more assured. Look at the beautiful figure groupings. The three figures in panels 3 and 4 are grouped as one. Then, in panel 5, they separate as they compete with each other in bidding for Dan Tootin’s new, delightfully silly invention. In panel 7, they are once again grouped into a cohesive whole with Dan as they all take in the new, game-changing information at once. Beautiful pacing, great drawing. By 1943, Cole had mastered the semiotics of comic book storytelling. 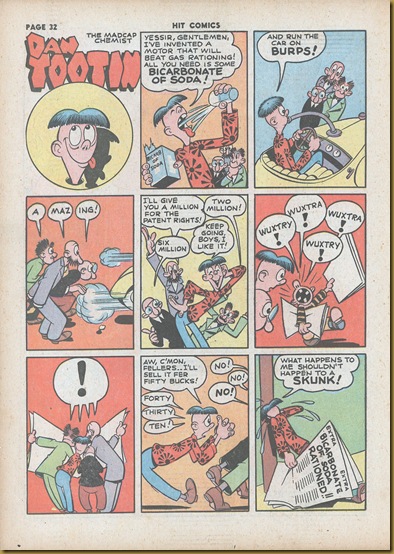 Hit Comics 34 (Winter 1944)
Notice how Cole’s drawing style has changed from the 1943 page, above. The drawing is tighter, more angular. The content is also edgier, not as innocently silly. And, sadly, here is yet another reference to suicide. It’s worth noting that the image of the weeping man, with giant teardrops gets developed a year later in a Spirit story, and then eventually leads to one of Cole’s greatest stories, “Sadly-Sadly” (see my post here) 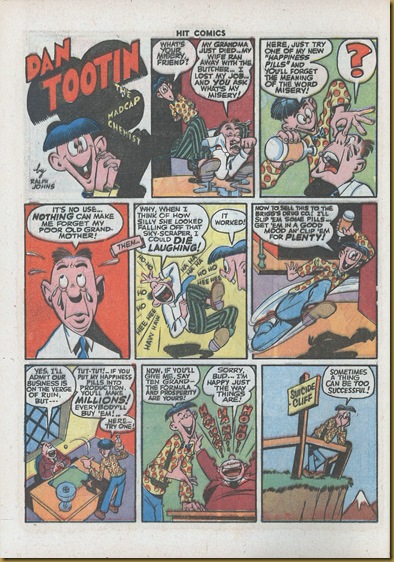 Crack Comics 49 (July, 1947)
Cole’s style, by the mid-to-late 1940’s had become quite baroque, and this one-pager is a great example of that. A more complex page-layout, the use of patterns, background detail, multiple characters, the list goes on. Cole is juggling a lot of balls by this time. This story has enough content for a 5-page comic. The drawings feel very much like the figures in Harvey Kurtzman’s HEY LOOK one-pagers (which were very likely inspired by Cole’s Quality one-pagers.) The story also feels a bit like Carl Barks’ UNCLE SCROOGE morality tales about money that would surface a couple of years later. 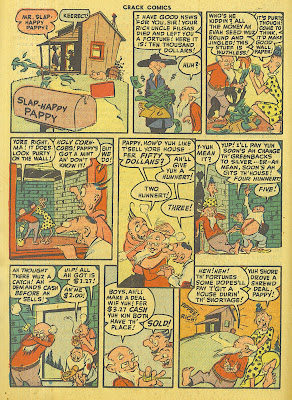 Candy 12 (October 1949)
The master at work, with a variation on Mark Twain’s classic story, “The Celebrated Jumping Frog of Calveras County.” Once again, masterful figure grouping. This time, it's an accumulation of figures. As the page progresses, more and more figures are added to each panel, until we have a big clump in the last two panels. I suppose something could be said here about Jack Cole unconsciously exploring group dynamics, but it won't be... he created these things for a grin and a giggle, and that's exactly what I hope you'll get from this post! 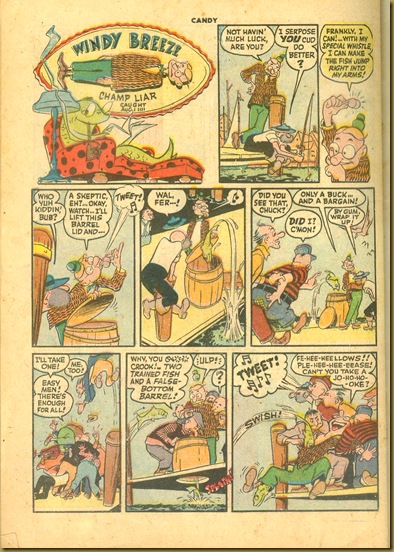