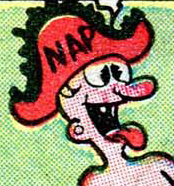 Funny Pages Volume 2, issue 11 (November, 1938) featured a panoply of Jack Cole's screwball stories. At the time, Cole was working for the Harry "A" Chelser studio in New York. Sometime in 1936, Jack borrowed some money from various merchants in his home town of New Castle, PA and moved to New York to start a career as a cartoonist. After a year of near starvation, Cole connected with the Chesler studio, which was packaging original comic book content to meet the growing demand for comics.

Cole's work of this time is very much influenced by the "screwball" school of newspaper comics, most famously represented by Bill Holman (Smokey Stover), Dr. Seuss, and Gene Ahern (Nut Brothers, Squirrel Cage). Here's a typical example of Ahern's Nut Brothers (written and drawn by someone other than Ahern who had left the NEA syndicate about three years earlier). This strip shows the screwball school in fine form around the time Jack Cole entered comics (note the Napoleon hat in panel 3) : 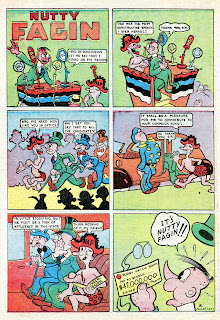 Note that Jack Cole signs this page "Sassafrass." As far as I know, this is the single occurrence of this particular pen name. Other pen names Jack Cole used were: Richard Bruce, Ralph Johns, and Jake.

One thing that strikes me about this page is the bold pattern of the crepe paper bunting that adorns the speaker's podium, and the pattern of polka dots on Fagin's boxer shorts. Over the course of his 16-year career creating hundreds of  comic book stories, Jack Cole would expertly use patterns to add visual appeal to his work over and over.

Another screwball artist that I suspect was a huge influence on Cole was Milt Gross. The energy and zaniness, as well as the sheer love of distorting the human figure that is so evident in Gross' comics must have inspired Jack Cole. Here's a couple of Milt Gross Sunday comics from 1931, when Jack Cole was 16 years old and starting to learn to cartoon. 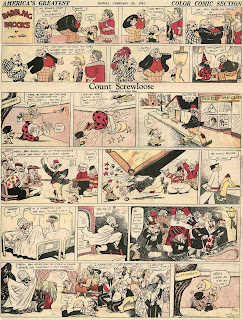 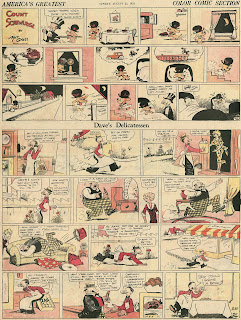 Next we find a rare example  of Jack Cole drawing the extremely non-PC "Cheerio Minstrels" two-pager series that seems to have been quite popular at the time, judging by how many Centaur comics have it. I think the "cheerio" concept was probably a core idea for Chesler. Here's the cover to one of his earliest publications, a newspaper Sunday magazine insert called Cheerio from January, 1936: 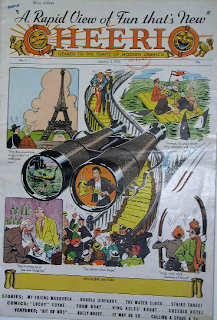 Note that, among the listed comics inside, we have "Cheerio Hotel" (and also "King Kole's Kourt," appearing before Jack Cole joined the studio -- which confirms that Cole's later episodes of the strip were a happy coincidence, and that he was not the originator of the comic). The Cheerio Minstrels  format was always a trio of African Americans singing a song in a sort of comic book version of a vaudeville minstrel routine. Cole's treatment is a shifting filmstrip of insanity: 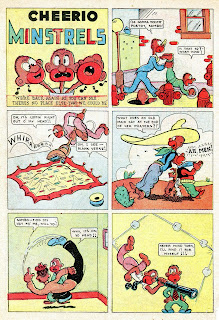 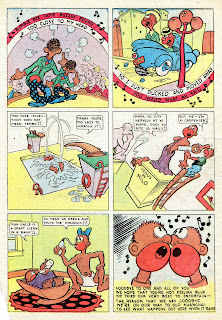 Observe, if you will, how, in the bottom of page one, Cole pneumatically propels the characters around the panel. This exaggerated movement is another element Cole would develop, particularly in his Plastic Man stories. In fact, Cole recycled the fourth panel on page 2, with the arm amputation with a saw, in his first Woozy Winks story (Police Comics 13):

Last, but far from least, is a zany 4-page story by Jack Cole, Smart Alec, in which the main character is resplendently adorned with reverse polka dot trousers. I particularly love the wonderful 2-panel spread at the bottom of page 3. I don't have a lot to say about this material, but just wanted to share it! Enjoy! 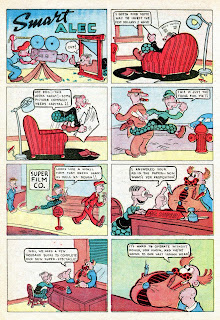 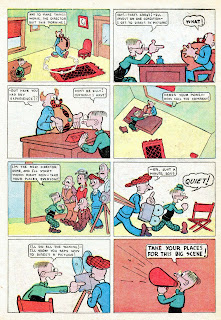 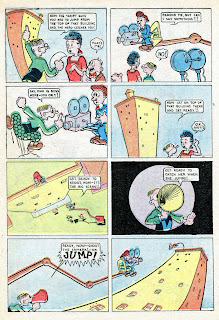 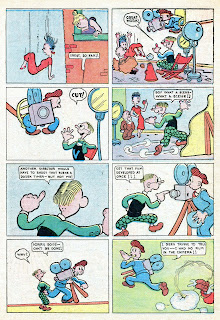 A big thank you to Digital Comics Museum and scanner "dsdaboss" for these marvelous scans!