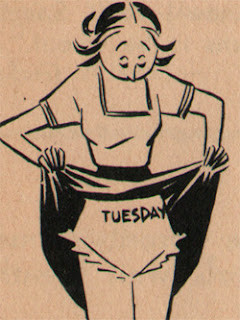 From 1946 to 1949, Jack Cole's friend and publisher, Hugh Hefner attended the University of Illinois in Champaign/Urbana.


Incredibly, Hef earned his Bachelor's degree in just two- and-a-half years by doubling up on his classes.


Somehow, he also found the time to start a new magazine, rather boldly named Shaft, which became the U of Illinois' humor magazine. An ambitious cartoonist at the time, Hefner published many of his own cartoons in Shaft.  Here's a cover he drew for the January, 1948 issue (courtesy of the University of Illinois archives): 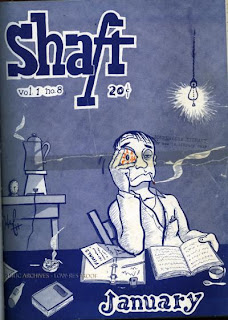 Here's a Hugh Hefner cartoon not from Shaft, but from the college newspaper, the Daily Illini. This example, with its comment on the modern woman, is a primitive form of the sexual cartoon Hefner would develop into its own art form with Jack Cole and others: 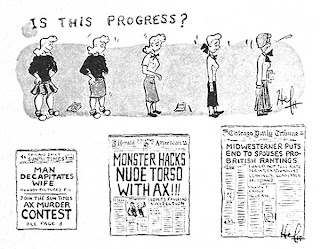 During the time he edited Shaft, Hefner introduced a (clothed) Co-Ed of the Month feature, the first version of the famous Playmate of the Month centerfold that would become a staple (or, more accurately, embrace the staples) of Hefner's Playboy magazine.

Hefner graduated in 1949 and went on to create Playboy in 1953 where he quickly attracted Jack Cole's cartoon submissions. As we've recently discovered, in 1954-55, Jack Cole created a number of  magazine cartoons and comic strips that have been mostly forgotten and overlooked. He was in transition from a 16-year career in comic books towards being a star magazine cartoonist and then syndicated comic strip creator. 1954-55 was a period of renewal, and rebirth for Jack Cole. 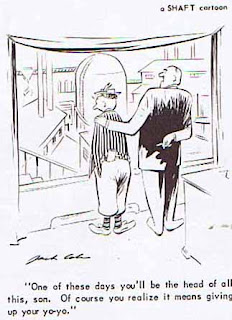 In his Magic Whistle blog, which has several covers and cartoons from 1954 issues of Shaft, Henderson speculates that the Jack Cole cartoon may have been a Playboy reject that Hefner passed on to his alma mater. That seems a reasonable assumption. The cartoon, which is funny enough, doesn't seem in the same league as Cole's Playboy work... and of course, it has nothing to do with women or sex. Maybe someday I'll get up the gumption to attempt to contact Mr. Hefner and find out for sure.

Our friend and fellow comics historian, Ger Apeldoorn recently purchased some issues of Charley Jones' Laugh Book Magazine, a bottom-of-the-barrel cartoon/humor magazine. Ger was delighted to discover, nestled among various minor work by unknown and forgotten cartoonists in the July 1955 issue, a terrific full-page Jack Cole cartoon! Many thanks to Ger for kindly sharing this new discovery with this blog. Be sure to check out his amazing blog, The Fabuleous Fifties which is a treasure-trove of comics and information. 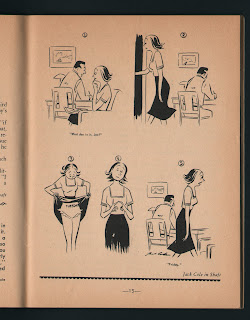 Note the tagline at the bottom right of the page, "Jack Cole in Shaft":

This seems to indicate that this cartoon is a reprint from an issue of Shaft, where it originally appeared. At this time, I have no access to the 1954-55 run of Shaft, so I cannot identify the issue in which this cartoon appeared.

Again, the theory that this cartoon is actually a Playboy reject makes sense. Hefner may have purchased it from Cole and then donated it to the University of Illinois, helping both his alma mater and Jack Cole  (who had just lost his house and most of his possessions in a flood). It could even have been a tax write-off! Here's the cartoon, cleaned up: 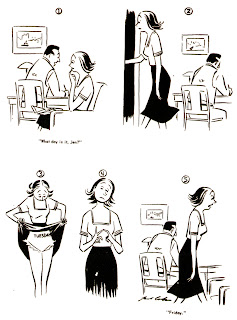 It's sexual humor, and sophisticated enough for Playboy. But there is a different approach. This is the period that Cole was experimenting and fine-tuning what would become a successful new formula. The cartoon here is very much in the same vein as the dozen Jack Cole cartoons recently discovered in a 1955 issue of Mirth (see my post here).

Perhaps it's simply that the thin, pinched, unhappy woman in this cartoon is much plainer than the typical Jack Cole Playboy women, who Art Spiegelman called "estrogen souuffles who mesmerized the ineffectual saps who lusted after them."

Spiegelman's observation is a terrific summary of the Jack Cole Playboy cartoon formula: bombshell women wielding extreme sexual power over impotent men. However, in this Shaft cartoon, the man has the power. The sexually frustrated woman has been waiting three days to have sex. The man in this cartoon is not ineffectual, he's just uninterested.  The cartoon has a sadness about it. Here's the cartoon re-organized in a vertical scrolling format:

Thanks again to Sam Henderson and to Ger Apeldoorn for more "lost" Jack Cole cartoons from the mid-fifties!