First off, a heartfelt thank you to all those great folks who have scanned their precious delicate paper copies of these rare comic books and shared them with the rest of the world. Without your efforts, this blog would not be possible!
Speaking of scanners, one of the more entertaining comic book scan blogs I’ve run across is The Panelogical Pantheon, hosted by Mr. Mason Moray, who has just recovered from the gout. This blog has to be seen to be believed!

Apparently, Mr. Moray, an older mid-west insurance man, owns a utility shed in his back yard stuffed with valuable old Golden Age comic books. This blog is so bizarre that it’s entertaining, in part because Mr. Moray’s taste is – to put it politely – different than the mainstream.

Being an older comics fan, Mr. Moray has some firsthand knowledge of some of the great comics masters. He’s published published an rather strange early interview with Will Eisner here… which, as far as I can tell, is mostly about Eisner’s minor character, YARKO THE GREAT. That’s a little like interviewing Einstein and only discussing his hairstyle!
The blog’s real meat, though, is in reading the rich details of Mr. Moray’s life. He seems to be oblivious of how absurdly comical many of the events of his life are… but then, perhaps the same can be said for myself and many of my fellow “panelologists!” 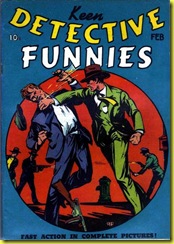 At the time, Cole was working in the Harry “A” Chesler studio, alongside other fledgling graphic storytellers that would also have successful careers in comic books, including Fred Guardineer, Paul Gustavson, Charles Biro, and Gill Fox, to name just a few. While the first comic books were reprints of newspaper strips, Chelser was the first, I think, to reprint comic book stories. It was a good business practice, and he reprinted a lot of Cole’s first stories – an indication of how they stood from the pack, even then. 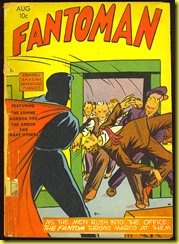 “Little Dynamite” was reprinted about a year later, in another Chesler publication, Fantoman #2 (August, 1940). It may have been recolored, but otherwise I can detect no changes from the black and white version available in Ron Goulart’s book, Focus on Jack Cole. The lavishly colored pages below are from that reprinting: 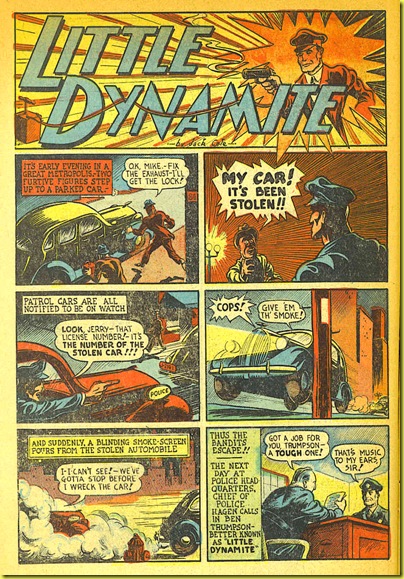 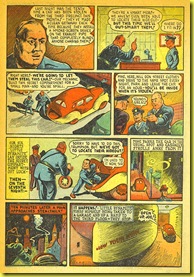 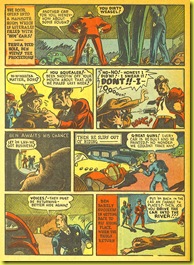 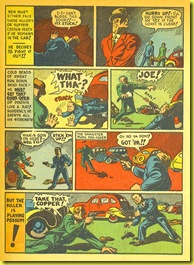 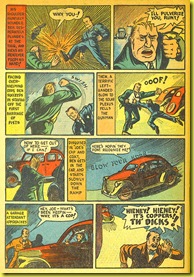 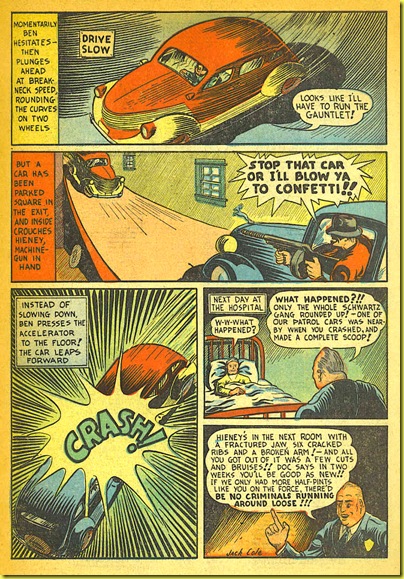 This was the longest sustained story, and the first adventure story Cole published (unless you count his 1935 Boy’s Life article about his amazing cross-country solo bicycle trip, which was mostly text).

Prior to LITTLE DYNAMITE, Cole had created a series of short comic fillers, such as KING COLE’S KOURT and INSURANCE IKE. After a year or so at Chesler’s studio, Cole thought he had found his big break. A well-heeled entrepreneur hired him to contribute a feature, PEEWEE THROTTLE In FUZZYLAND to Circus The Comic Riot (Globe Syndicate). (If anyone has a scan of these stories, please share!)

Cole wrote home to his parents in New Castle, Pennsylvania that he had made it, and graciously thanked everyone that helped him. Other top talent had been hired to the project as well, including Basil Wolverton and Will Eisner. The book consisted of original short 1-4 page humor pieces. I found an informative article about Circus here. 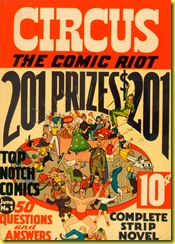 Unfortunately, Circus bottomed out, only lasting three issues (June-August, 1938), and Cole was back at Chesler’s for a while.

By this time, Jerry Seigel and Joe Shuster’s SUPERMAN and Bob Kane’s BATMAN (Kane also had stories in the failed Circus) had begin to take off and comic books were increasingly populated less by comic fillers and more by longer adventure stories featuring costumed crimefighters. If an artist could turn in a 5-10 page adventure story, he could make a great deal more income than possible with the short 1-2 page humorous gag pages.

So it was to Cole’s economic advantage to learn to create adventure strips. LITTLE DYNAMITE was the first effort of a creator who master and innovate the medium of graphic storytelling.

As crude as the story is, it is obvious that Cole dug down deep for this one. He has put so much effort into the artwork that it has a beautiful decorative woodcut quality. Never again would Cole fill his panels with quite so much darkness and shadow.

Jack Cole is already acquiring the rich and unique vernacular of telling a dramatic story in a comic book and making it his own. He jags the edges of the speech balloon in panel two on the first page of the story, indicating the words are said not only loudly, but emphatically. He mixes narration and dialogue to move the story forward.

Also of interest is the way Cole employs extreme points of view, placing the “camera” on the floor, or high up in air at times, to heighten the drama of the story.

Most impressive though, is the story itself. The man who published more of Cole’s stories than anyone else, Everett “Busy” Arnold (Quality) said that Cole was the rare comic book artist who could also write a good story.

In LITTLE DYNAMITE, Cole as a writer really explodes on the scene. The story is a genre story, slotting perfectly into the  crime drama format that flooded the pulpy pages of popular magazines and the roaring airwaves of radio.

The title alone,”Little Dynamite,” is poetic. The “mite” part of the word “dynamite” resonates with “little.”
The story, about a diminutive policeman who uses his size as an advantage against hardened criminals, prefigures Cole’s most famous creation, PLASTIC MAN.

It is to career criminal Eel O’Brian’s everlasting credit that, upon discovering he has the ability to stretch his body at will, he imagines what a force it would be in fighting crime and redeeming himself. In this famous story, the origin story of PLASTIC MAN, Cole again has a character using a deformity as an advantage.

Cole returned to deformity, or shape-shifting, over and over throughout his 16 year career in comics. His very last published comic book story, “The Monster They Couldn’t Kill” (Web of Evil #11, Feb. 1954) deals with deforming the human body. In his PLASTIC MAN stories, evil men often become powerful through deformity. And, of course, Plastic Man himself is all about changing shape and identity.

The story also speaks to the idealism and nobility of purpose that Jack Cole embraced in his early life. Far from being cardboard characters, the policemen in this story are highly motivated by a sense of good, which shows in how they treat each other with decency and support, and in the brave act of heroism the diminutive policeman demonstrates when he goes against the car-stealing gang.

Next posting, we’ll look at Jack Cole’s last published comic book story, mentioned above, to see if there are some insights about the arc of his career and personal development.