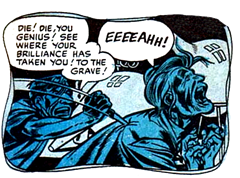 The last comic book stories of Jack Cole are not what you’d expect. They are not fun; they are dark and disturbing.

They are an aborted new direction, truncated before it was barely begun. They are the end of a brilliant career. They are the last graphic stories by a master of the form who moved into new art forms and never looked back. These stories are deeply flawed, mostly failed efforts, and represent the mind of a great artist cracking. They are burn out, brilliance, and a bizarre foreshadowing of death.

After PLASTIC MAN ended, Cole created a comical private detective and a rich William Saroyan-like cast of characters. He called the series ANGLES O’DAY (you can read the stories and my essay on them here) and it appeared in the pages of Ken Shannon 1-8, an otherwise bland private eye comic published by his primary employer, Quality Comics. The ANGLES stories represent Jack Coles last lighthearted humor stories. 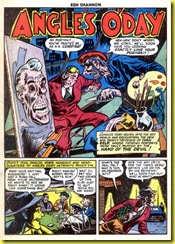 The very last ANGLES O’DAY story dropped most of the comedy and instead shifted into a grim, horrific world in which frightening supernatural events were the order of the day. Cole’s art even changed. His line became heavier, his panels were filled with menacing shadows.

In November, 1952 Quality stepped into the horror comic market with a new book: Web of Evil. It was clearly designed to be a new home for the work of Jack Cole, their premier talent who found himself adrift when his main superhero series had lost traction and faded away. 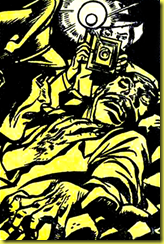 It seems a safe guess that Cole himself had a hand in the book’s creation and choice of his own direction. It strikes me as a little odd that he would swing so fully into the horror market, since the best selling comics of the period were romance and girlie comics (such as Quality’s TORCHY). Cole could draw sexy women so well that he would soon create the quintessential Playboy magazine cartoons. His stories through the 1940’s were populated with alluring examples of womanhood. Perhaps Cole could not stomach the inane conventions of the romance, girlie comic genre. Perhaps his stuff was too adult for the intended market. Or, perhaps Cole , who had a flowering career as a magazine cartoonist in men’s magazines, simply wanted to try a new direction and see what he could do with it.

Cole stayed on the title for ab 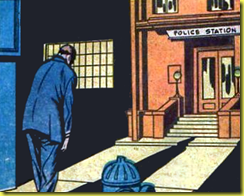 out a year and half, until issue 11. He had the lead story spot in issues 1-9 and 11 (issue 10 had no Cole stories). He drew most of the covers, and many issues of Web of Evil contained two Jack Cole stories.

To say the Web of Evil stories are “Jack Cole stories,” may be a bit misleading. While it’s clear that Cole penciled all of these stories, his writing and inking contributions are harder to determine. In Jack Cole and Plastic Man: Forms Stretched to Their Limits, Art Spiegleman writes: “… these horror comics, often scripted and barbarically inked by others look as if they were done for the money.” Cole’s other two biographers to date, Jim Steranko and Ron Goulart, offer no commentary at all on Cole’s last stories. 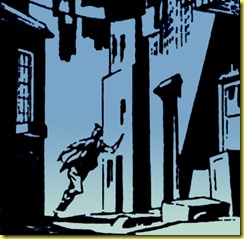 With the greatest of respect for Art Spiegelman, I see a lot of effort put into Jack Cole’s last comic book stories. These stories contain some of the most visually complex panels and images Cole ever created. His signature figure distortion has been re-purposed from comedy to creepiness, but it is just as brilliant.

The stories are all unsigned and uncredited. As far as anyone has been able to determine, no records of who worked on 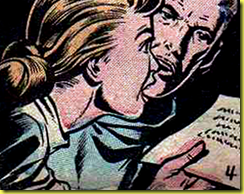 this title exist. It seems a safe bet to assume that in some cases the stories were inked by Cole’s protégé Alex Kotzky. A few years earlier, in 1947, Cole and Kotzky created the intense two issues of TRUE CRIME, and some of the art in the Web of Evil stories looks very similar to this work, reaching similar levels of atomic-powered intensity.

While I am unsure of which stories, if any Cole inked, I feel fairly certain about which stories Cole wrote. Cole’s 16 Web of Evil stories fall into two types: Unexplained Supernatural Events and Psychological Breakdowns. It seems pretty obvious to me that Cole wrote the stories that fall into the latter category.

In the Unexplained Supernatural Events, characters come against bizarre circumstances, such as severed hands that still seem alive, or magic spells that somehow reanimate the dead . The characters inevitably fall victim to these terrifying phenomena, but no explanation is ever provided for the existence of these mysterious situations. They simply happen. These scripts are sloppy and tedious, and often even Cole’s extraordinary drawings cannot make them more than barely entertaining.

In the second category of stories, which I think Cole wrote, and which I call Psychological Breakdowns are better written and have clever, surprising plot twists.

In these stories the resulting horrific events are always shown to be result of a character’s mental breakdown. For example, in “The Killer From Saturn,” 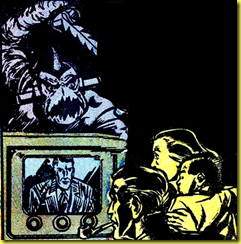 (which Art Spiegleman asserts is purely Cole’s work), it appears that a wildly frightening alien from outer space has landed in an American city and is murdering its inhabitants without cause or discernable reason. In the end, we learn the monster is actually a slight, timid man who has gone mad, dressing up in a monster costume and killing in a twisted form of revenge and ego gone wild.

Further evidence that Jack Cole wrote these lies in the fact that the stories all play with the theme, coming at from different angles, which is very typical of Cole’s restless, inventive mind. In the story below, from Web of Evil #6 (Sept. 1953), a contract killer appears to have stepped into the Twilight Zone: 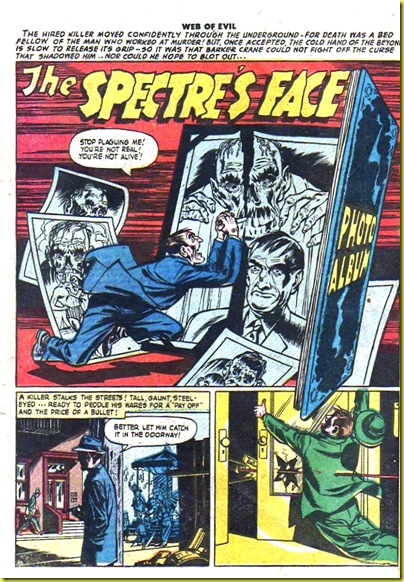 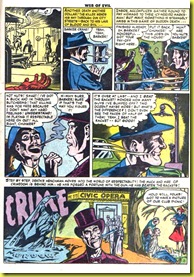 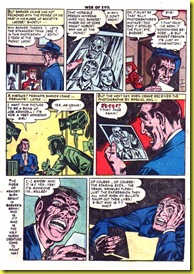 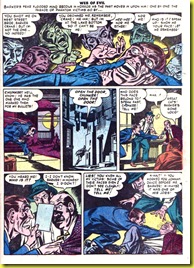 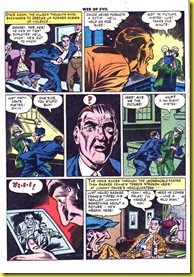 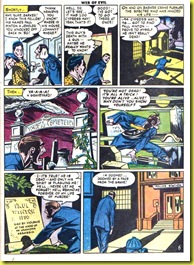 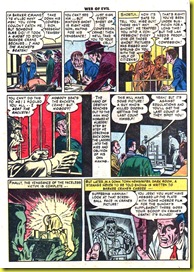 Cole’s stories pulled the title out of a standard horror realm, and stretched the series into crime and science fiction as well. Instead of a horror story, Cole would write a crime story as if it were a horror story, playing with reader expectations.

These stories of people cracking under stress poignantly foreshadow the remainder of Jack Cole’s life. After completing these stories, Cole not only left a dying industry for good, but also referred to his brilliant and accomplished career in demeaning terms. There can be no doubt there were hard feelings for Cole under the surface. In one story, which may or no be true, Cole is said to have taken his portfolio to DC (National) and was rejected.

It may be that Cole was burned out in comics. He wouldn’t have been the first. Another Quality comics staffer killed his own wife and 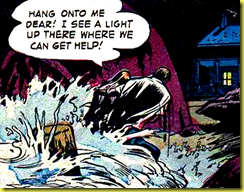 went to prison. Quality Comics artist and editor Gill Fox said later that the grind of the 1940’s in comics got to many people. It’s rarely acknowledged that these “funnybooks” of the forties about colorful heroes, goofy characters, and sexy girls were created by people working long, grueling hours in a seemingly never-ending cycle to support their families.

Four years after he left comics, Cole took his own life in a fit of despair. His last stories, filled with darkness, images of suffering, and turning on mental breakdowns can be understood in the shadows of this disturbing event. As readers familiar with Cole’s work know, there were traces of darkness all along. In “The Eyes Have It” (Police Comics #22, Sept. 1943), Cole deals with child abuse and exacts retribution on the abuser by severing his head from his body with a bear trap. Many of his “funny” stories throughout the 1940’s involve the characters attempting or actually committing suicide.

It is often said that comedians are the most depressed people. Perhaps it is the ability to see the truth and use this perception to create laughter that also burdens them with melancholy. It seems that in his last comic book stories, Jack Cole, one of comic’s true masters of comedy was trying to come to grips, through his art, with his darker side.

Next post, we’ll look at another Cole-scripted Web of Evil story, one which bears all the hallmarks of his obsessions!