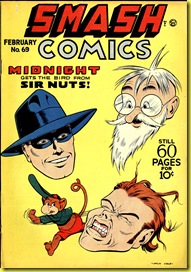 The second run Midnight stories, in which Cole returned to his creation after a four-year hiatus were a deep-dish serving of Cole’s graphic brilliance and mastery of the vernacular of comics (a part of that vocabulary he created and refined).

It’s too darn bad that the mid-1940’s Midnight was such a bland character. He had little personality, no super-powers, and lacked the grim drive for vengeance that characterized the stories of the first run, in the early forties. Even the impractical but charming vacuum gun was left behind. Try as he might (and he mightily did try), Cole could only make the Midnight stories about a tenth as fun to read as his Plastic Man series.

Cole worked Midnight into a similar formula as Plastic Man. Namely, that of a sane man surrounded by loonies. However, with Midnight, there were a few misfires that may have seemed like a good idea at the time, but which leeched a great deal of potential out of the series. These misfires included moving Dave Clark’s inventive streak (he invented the vacuum gun) to Doc Wackey and surrounding the hero with a whole family of sidekicks so that no one single character ever got enough air time to develop of as anything more than a two-dimensional figure in the story.

That being said, there is still much to recommend these stories, such as the tight drawings, the wildly inventive page layouts, and the unleashing of a giant bag of techniques only Cole could deliver. 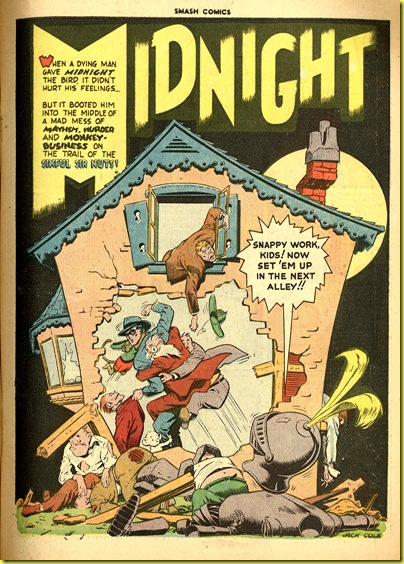 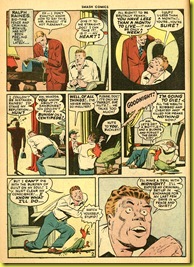 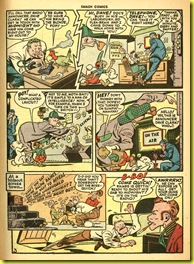 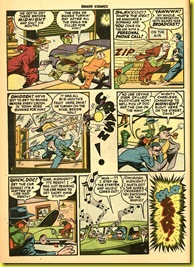 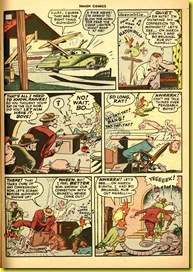 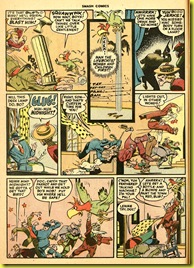 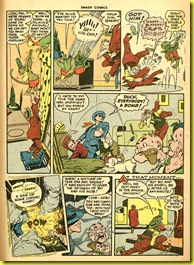 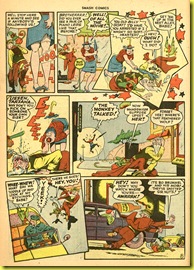 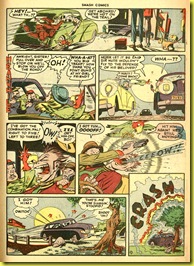 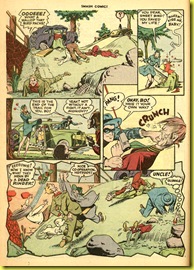 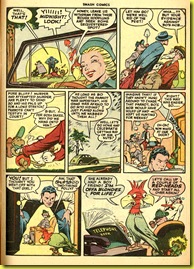 So, how about that parrot, huh? This pre-code comic book story is invested with bawdy humor that mostly circles around the idea of a parrot convinced sexual relations with a human woman are not only within the realm of possibility, but worth single-mindedly pursuing at any cost. Lustiness aside, the use of a talking parrot as a story device brings to mind “The Pixelated Parrot,” a story by another master of comics, Carl Barks that appeared in 1950 (Four Color Comics 282).

Cole begins the story with a sequence involving death that is typical of his work. In Cole’s universe, even when zany antics are afoot, the grim reaper is never far away. Note how Cole draws the doctor in the first panels of page two. With his restrained posture and buzzard-like stoop, he resembles an undertaker more than a healer.

In this story, Cole careens and propels his characters through space. The wheels of cars and the feet of people rarely touch the ground as they speed from locations to location, sometimes even breaking through the panel borders! On page four, even a sound effect breaks through the panel!

On the bottom tier of page 7, Cole employs his patented “shaky panel” to display the effects of an explosion. Cole used the quivering panel to both convey emotion (as in when a woman cowers in terror when a hypodermic needle threatens her eye in “Murder, Morphine, and Me”) and to show the effects of explosions and bangs.

On page 8, in the best sequence in the story, Cole delightfully plays with sound effects, slyly sending a wolf whistle between a woman’s sexy legs, creating a great visual pun. A couple of panels later, her shriek begins in her mouth. A whole book could be written on what Cole did with sound effects in comics.