Before he invented PLASTIC MAN, Jack Cole created and lavished attention on MIDNIGHT, his first feature series for Quality comics. When the rubbery madness of PLASTIC MAN’s world caught on, Cole left MIDNIGHT to devote most of his energy to his breakout creation, which was granted an unusually generous 15 pages per story in POLICE COMICS.

After a four-year stretch (if you’ll pardon the pun), Jack Cole returned to MIDNIGHT for a glorious run of 19 stories that have been unseen and uncommented upon for over 60 years. I’m pleased to excavate these from the Cole-mine for you over the next few months. (If you’d like to read the earlier MIDNIGHT stories, look here.)

In terms of character, not much changed in the four years that PAUL GUSTAVSON owned the series. GUSTAVSON added a new character, the Woozy-Winks-like Sniffer Snoop, which Cole embraced and wrote as if he were Woozy Winks.

Cole returned triumphantly to his series with, “Atomic Dice,” a three-ring circus of a story – there seems to be more than one thing happening in almost every panel. In the four years he had been away from MIDNIGHT, Cole had matured into a master graphic storyteller. Many of the innovations he piloted in the early MIDNIGHT stories return here with polished flourishes, like the act of a seasoned magician.

For example, just look at the splash page and study how Cole positions groups of figures in the background and foreground in a strong diagonal to emphasize the movement. And, for the flourish, just look at the graceful, swirling, speed lines of the dangerous dice… 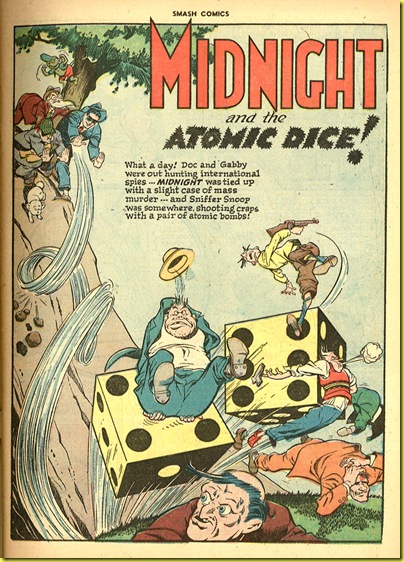 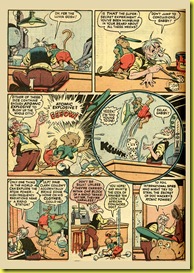 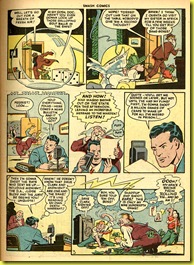 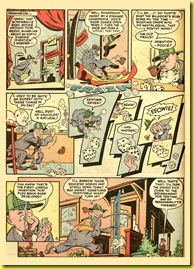 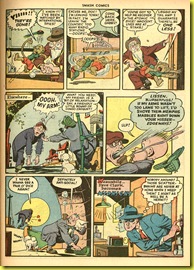 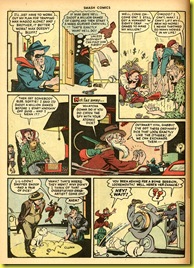 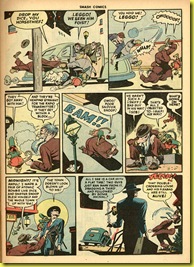 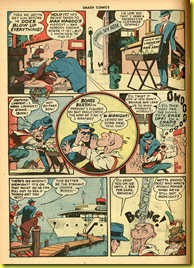 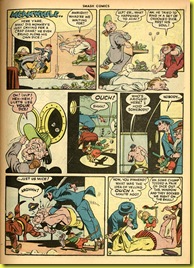 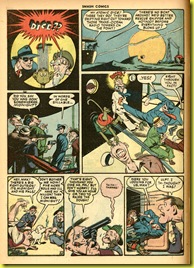 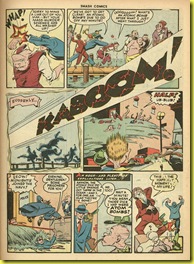 For this story, Cole returned to his tried and true formula of crazy inventions. But, this time, there are no rays that melt the ground, or freeze people into flavorful popsicles. There’s not even a vacuum gun. The invention this time reflected reality, perhaps indicating the more serious turn Cole – and the country – would take at the end of of the 1940’s and early 1950’s.

Just as PLASTIC MAN was a covert satire of American life, this MIDNIGHT story reflects the onset of the Atomic Age in the “real” world. About a year earlier, the United States had unleashed atomic explosives on two cities in Japan, ending World War II. 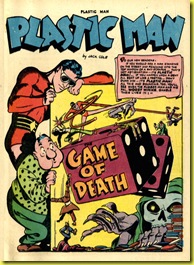 Three years earlier, in 1943, Cole used dice as a design element in the splash of his lead story in PLASTIC MAN #1.

Cole’s art on this story is amazing. Consider this panel from page four, which already has a stunning layout without this elaborately-rendered house: 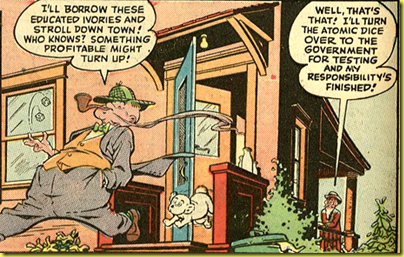 There’s the graceful plume of smoke again, by the way. But what really excites me about panels like this is how Cole breaks up time and space. Cole has shifted the camera angle to allow us to see one man entering while another is leaving, throwing the plot into high gear.

There are wonderful touches in the art throughout, such as the way Cole indicates the buildings with a field of white defined by a dark sky and shadows on the windows. 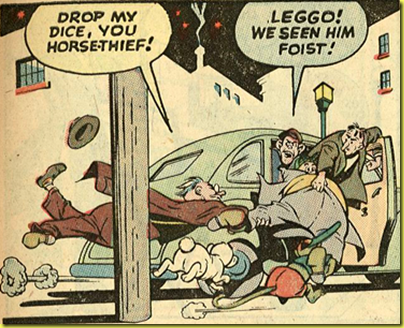 By the way, there’s 7 characters in this panel, each with distinctive body language. In fact, this is a classic Jack Cole panel, with speed, comically distorted bodies (as though the scene had been filmed with a high-speed camera and then freeze-framed for this one panel), graphic brilliance, and great dialogue, expertly lettered.

The playwright George Bernard Shaw once said that if you have a gun on the mantelpiece in act 1, it must be fired before the play ends. Thus, being a master storyteller, Cole knew that if he introduced a devastating explosive device on page 1, he would have to have a massive explosion on the last page. Here’s the explosion, with the surrounding art removed. 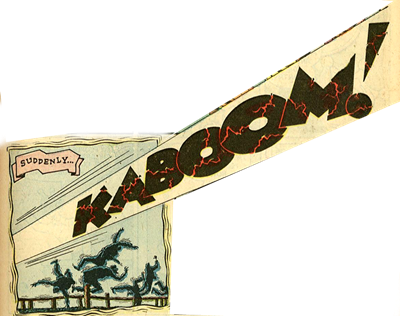 Cole literally splits the page in half with one of his biggest sound effects ever (note the patented Jack Cole pointed exclamation mark). Even the letters in KABOOM! are cracking from the force! The explosion rocks the panel and throws the characters to the ground. Cole draws them as anonymous shadows… did he have Hiroshima and Nagasaki on his mind?

The wiggly panel borders were another Cole invention, used most famously in the needle-in-the-eye panel from “Murder, Morphine, and Me” (True Crime Comics Vol.1 #2, May 1947).