PLASTIC MAN Jan 1950: The Return of the Pointed Exclamation Mark!

For a 13 issue run of Plastic Man (issues 17-29), Jack Cole wrote and drew almost all the contents in these issues. In the first story in Plastic Man #21 (Jan. 1950) most of the sound effects are punctuated with a “flat” exclamation mark (on left in illustration below).

But somewhere in the middle of the story, Cole draws a BAM! with a “pointed” exclamation mark (right side of illustration above). It’s even artfully arranged so the “M” breaks it up.

I believe this is important because it is a sign that Jack Cole was re-connecting with his original, pure source of inspiration after a few years of dampened enthusiasm brought on most likely by having other writers and artists forced on him to produce the large number of Plastic Man stories his publisher wanted.

The pointed exclamation mark populated almost all of Jack Cole’s comic book work for the first 6 or 7 years. This was when he wrote, drew and often even lettered his own stories – a highly unusual practice for the time and one which, I believe, allows us to consider his graphic stories as the developing work of a master of the form. In 1950, Cole began to flow the magic of his early work back into his stories, but this time – instead of a talented newcomer – here was an accomplished master employing numerous techniques with an almost casual virtuousity. 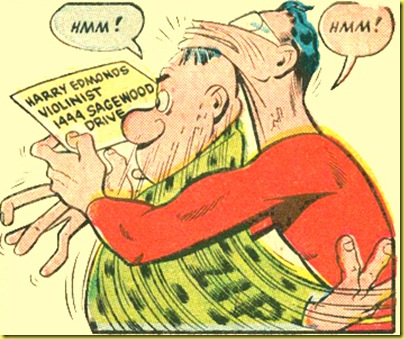 As Cole re-connected with his vitality and vision, his work in 1950 became became richer and more complex, developing into what could be called Cole’s “baroque” period. Plastic Man never stretched so outrageously and comically. I can think of no other comics that are as dense with humor and invention as Jack Cole’s 1950 Plastic Man stories. 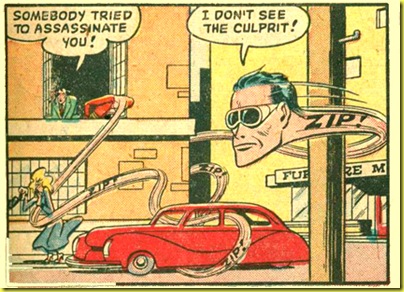 Reading these stories is a jaw-dropping experience for any comics person. In just one page, Cole delivers a dazzling array of brilliant graphic design solutions. His stories have some much kinetic energy they almost vibrate on the page. There is often more than one thing happening in each panel so that it’s necessary to re-read the stories in order to fully engage with them (similar to the way the film Playtime by the inspired filmmaker and comedian Jacques Tati works). 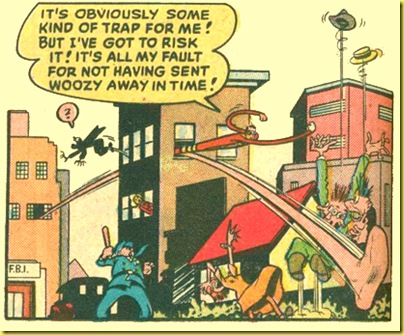 In the “Kra Vashnu” story, the sudden and abrupt single appearance of the pointed exclamation mark heralds a new phase of focus and passion by Cole. The story certainly reflects this, with some astonishing panels and art, such as this one (with dialogue removed): 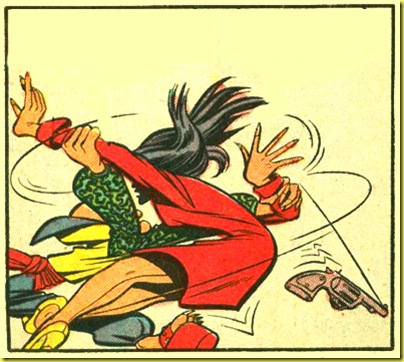 which shows quite well Cole’s uncanny ability to draw the less defined “in-between” poses – almost as if he was able in his mind’s eye to freeze the frame of a movie and then draw that. In so doing, Cole’s “freeze-frame” technique delivers some of the most abstract and beautiful art seen in comics.

The “evil magician” plot of “Kra Vashnu” is one that Cole used over and over, starting with his third MIDNIGHT story in March, 1941. Cole revived his first evil magician, CHANG-O, in December, 1941 with “The Return of Chang-O.”

Still, Kra Vashnu is quite a diabolical foil, and his appearance is pleasingly bizarre, with his tattooed forehead, cape, platform shoes, and – strangest of all – his long, unclipped toenails (in one sequence, Woozy tries vainly to clip them).

The story does contain some of Cole’s trademark themes, including doubling (doppelganger) and identity shifting. There is also a vivid misogynistic murder and attempted suicide. In the story’s climax, Plastic Man is seemingly murdered, his corpse resembling a deflated, punctured balloon. All of these violent themes are surrounded with non-stop gags and brilliant art, making it a Jack Cole classic.

Plastic Man’s stretched poses and transformations are particularly brilliant in this story, as well, and worth paying attention to as you read this amazing story, which I have painstakingly digitally restored for your reading enjoyment: 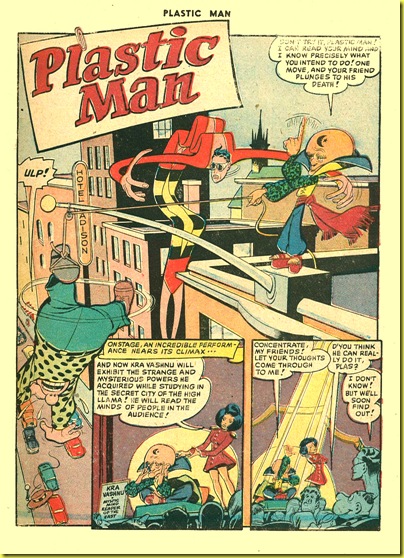 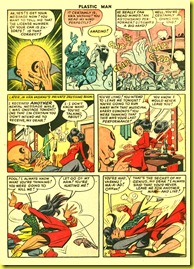 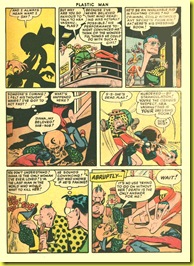 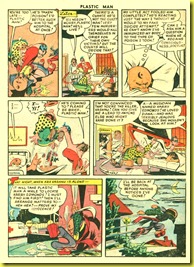 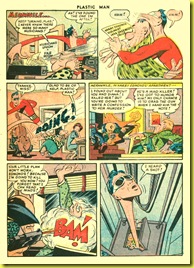 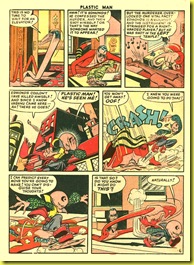 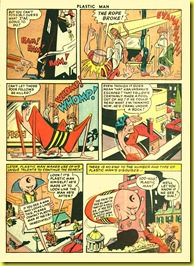 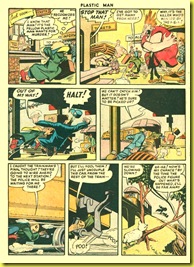 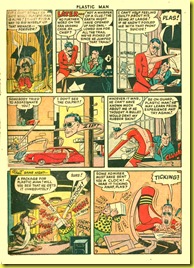 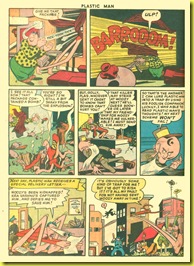 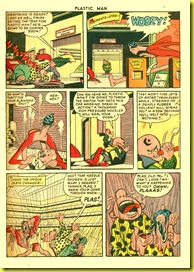 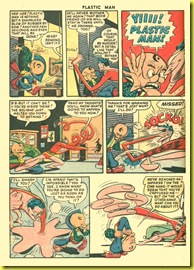 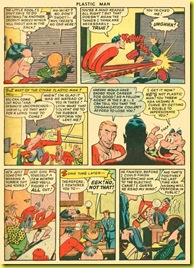