From the renowned Heritage Auction Galleries website comes the original art for this stunning monochromatic ink and watercolor cartoon that originally appeared in Playboy Magazine, August, 1954, page 29. The art measures 15.5 inches by 13 inches. 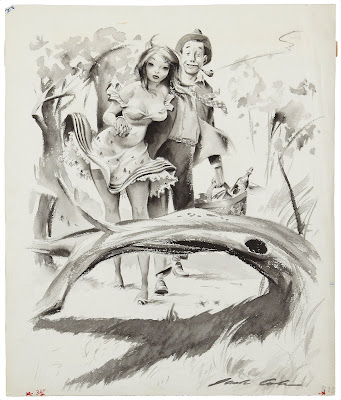 Cole had become a virtuoso of technique by 1954, and this art demonstrates that without question. Look at how the people are clearly Jack Cole characters. In the early 1950's, Cole had begun to inject more realism into his comic book stories. In series like Angles O'Day and the Web of Evil stories, while still flights (or perhaps "plumments" is a more suitable word) of fancy, Cole's figures become less plastic, more solid and subject to the physical laws of a three dimensional world. 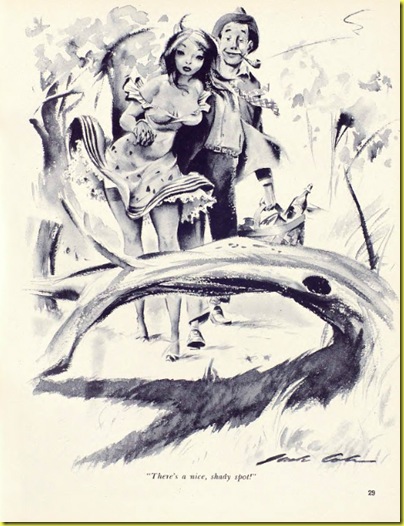 Cole left comics in 1954, never to return. The artwork we see here, with an unknown caption, is one of his earliest Playboy cartoons. His later Playboy cartoons (some of which are here) would be less tight than this, looser and impressionistic, and perhaps less personally invested.

Incidentally, Cole was also given a big plug in the opening pages of the August, 1954 issue, in which the cartoon above appeared: 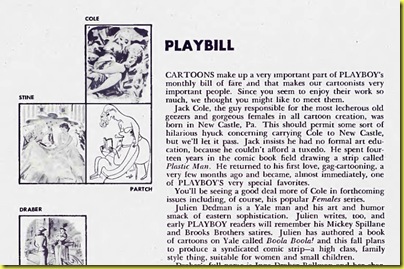 Here, Jack Cole is at the start of an exciting new business relationship with the charismatic cartoon aficionado and soon-to-be magazine millionaire, Hugh Hefner. You can feel his enthusiasm and hope in how much careful detail he's invested into what is, after, supposed to be a simple gag cartoon. Click on the art and look at the folds on the woman's dress. The detailing on the man’s belt. The lace frills of the woman’s slip as it's blown up by a slight breeze. The criss-cross pattern (Cole loved patterns) on the man's tie, also caught in the breeze.

This is a moment frozen in time. The couple is happy, going on a picnic in the woods on a spring day. Jack Cole has left the grind of the declining comics industry and has a promising new life as the premier cartoonist of a very promising new magazine. This cartoon captures both the couple and Cole at a peak moment.

Did you notice, though, he has put a gnarled, ancient root across the happy couple's path? The phallic symbolism aside, it’s an obstacle. Tragically, in a few short years, Cole would trip up on the gnarled roots of his own life.