May 1948 saw a big shift in Jack Cole’s involvement with his premier character, Plastic Man. About a year later, something happened, and Jack Cole rediscovered his muse.

After creating the breakthrough PLASTIC MAN comic book story “The Dictator of Dreams” (see here to read) for Police Comics #78 (May 1948), Jack Cole left the title to focus on creating four PLASTIC MAN stories every other month for the Plastic Man comic book. It was a period of lackluster, watered-down work. 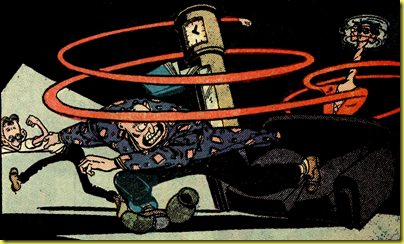 Cole returned to Police Comics about a year and a half later, with a darker sensibility. We’ve presented two of these stories in this blog here (“Plastic Man Goes to the Gas Chamber”), and here (“Plastic Man Wanted: Dead or Alive”).

When Cole made the move over to Plastic Man (which had mostly been the work of others from issue 3 on), the title shifted from a quarterly (four issues per year) to a bi-monthly schedule (6 issues per year).

For about a year, Cole wrote and penciled most of the stories published in Plastic Man #12 -17 while others inked them. Starting with issue 17, Cole began to ink some of his own stories and there followed a golden period in which he reached new heights, working in an over-the-top dense cartoony style that pre-figured the classic MAD stories that would be created in a few years by Harvey Kurtzman, Will Elder and Wally Wood.

After studying the “cartoony” Plastic Man comic book stories of 1949-51, I have come to feel more strongly than ever that the influence of Jack Cole on the look of the MAD comic book stories was much greater than has previously been understood or acknowledged. If nothing else, he was the first to pave the way for hip satire in comic books. As further posts will show, there is a direct genetic link between the styles of the works.

In 1951, Jack Cole’s comic book stories shifted from the wild cartoony style to a darker, more realistic phase, and then finally a strange, shadowy last period. For now, here’s an early sign of Cole’s re-emergence, from Plastic Man #14.

With finishing inks by the great Alex Kotzky, this story shows signs of Jack Cole re-discovering some of the inspirations of the early, enthusiastic, no-holds-barred work of his early years as a comic book storyteller.  Just the splash page alone shows that Cole has decided to try harder.

Although he never really left his theme of crazy inventions, Cole breathes new life into it in this story. He’s combined the crazy invention theme with his other recurring theme, shapeshifting, or face and identity change. With a simple hypodermic injection a man becomes as hard as concrete, a perfect foil for the rubbery PLASTIC MAN. But, as Cole so often shows us, it is far better to be able to change and adapt than to be strong but inflexible.

Featuring wonderful art and some stand-out sequences, such as when Plas uncoils in a dark room to locate a hiding killer, here is “A Hard Guy Called Concrete,” from Plastic Man #14 (Nov. 1948): 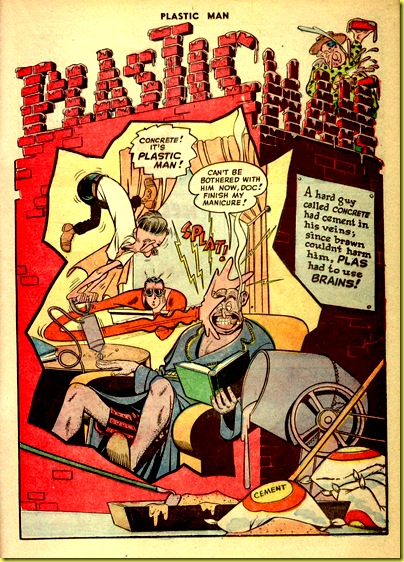 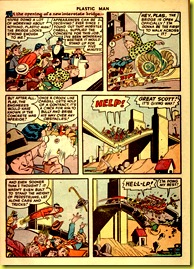 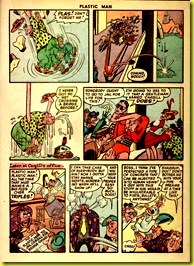 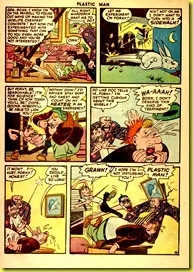 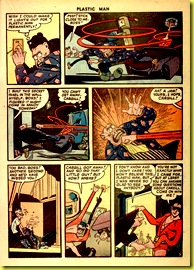 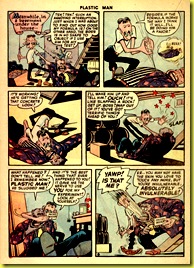 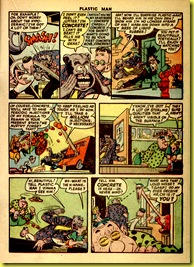 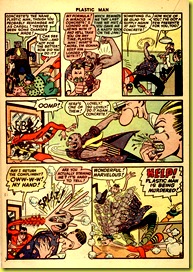 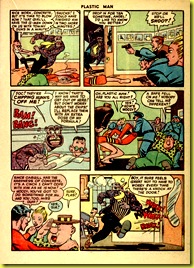 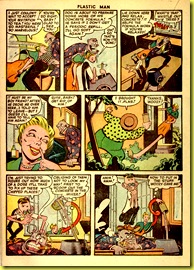 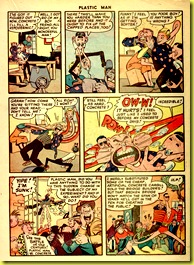 Announcement: There is a secure PayPal Donations button at the top right corner of this and every blog posting. So far, with donation and ad revenue, only $30 has come in to this blog in 10 months of work. I don’t do this for the money, but I am asking for your support since, in all humble honesty, my PowerPoint presentation design business (www.presentationtree.com) has severely dropped off, and I am struggling financially. Your donations, big or small, in 2010 will help me serve you better.  Thank you for your kind consideration.

Announcement Too! To raise much-needed rent and grocery money, I am selling off some items from my personal comic book collection on eBay over the next few weeks. Here’s the link: http://shop.ebay.com/sushisobe/m.html?_dmd=1&_in_kw=1&_ipg=50&_sop=12&_rdc=1