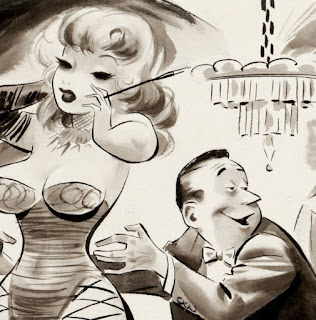 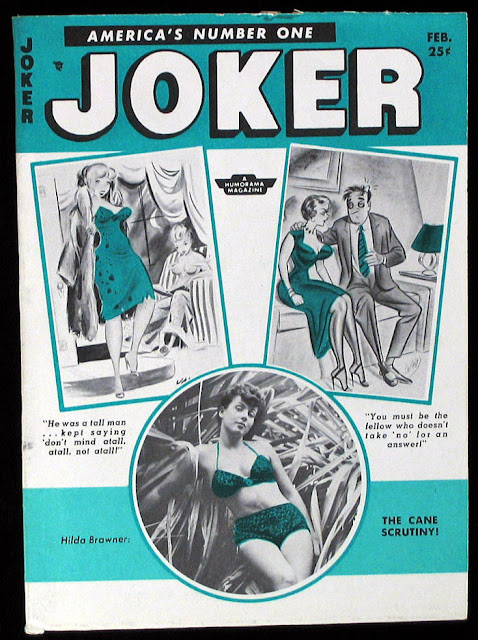 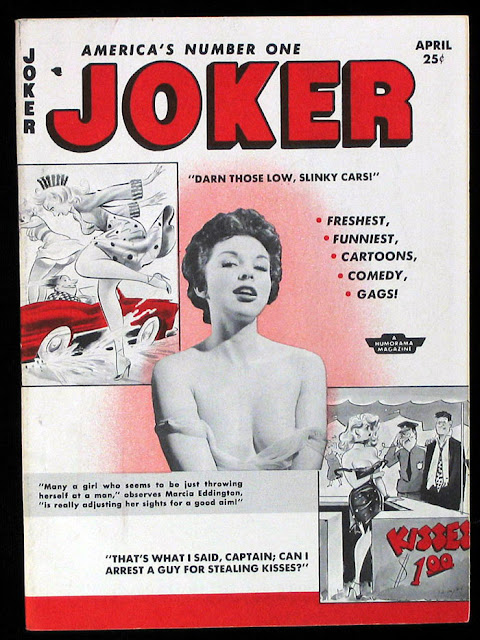 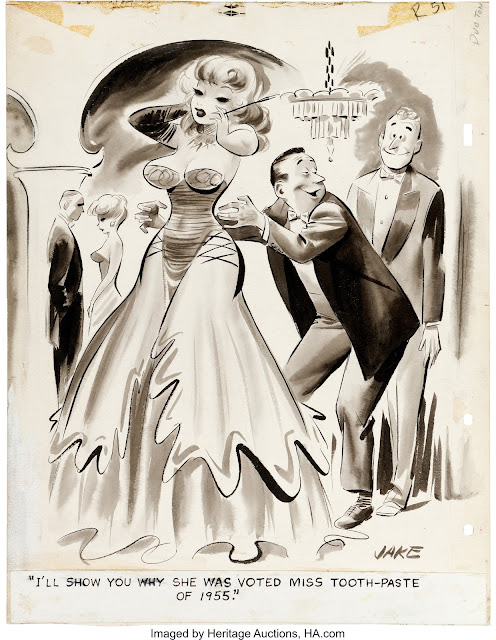 
Posted by Paul C.Tumey 3 comments:
Email ThisBlogThis!Share to TwitterShare to FacebookShare to Pinterest 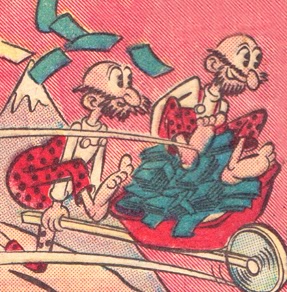 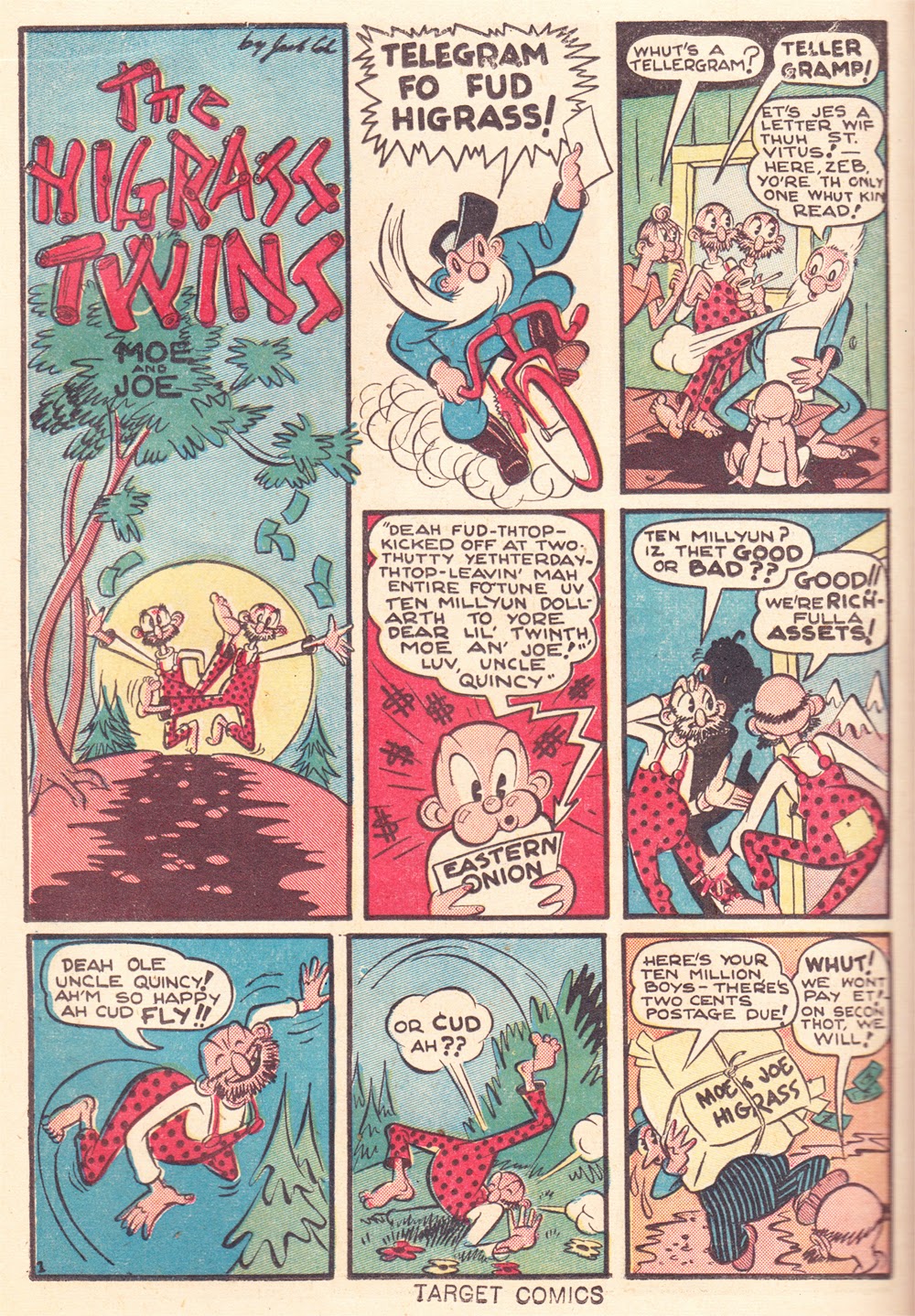 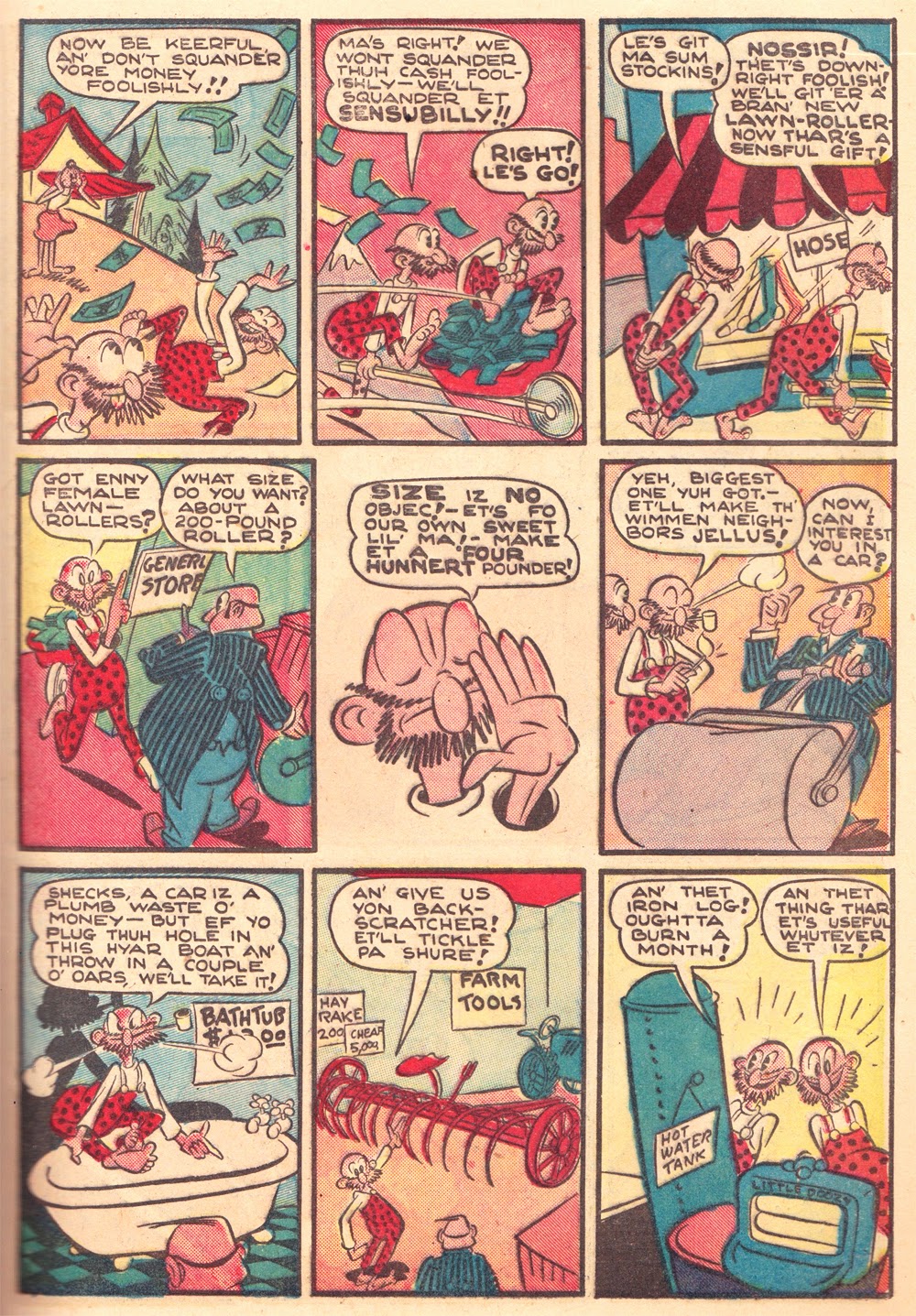 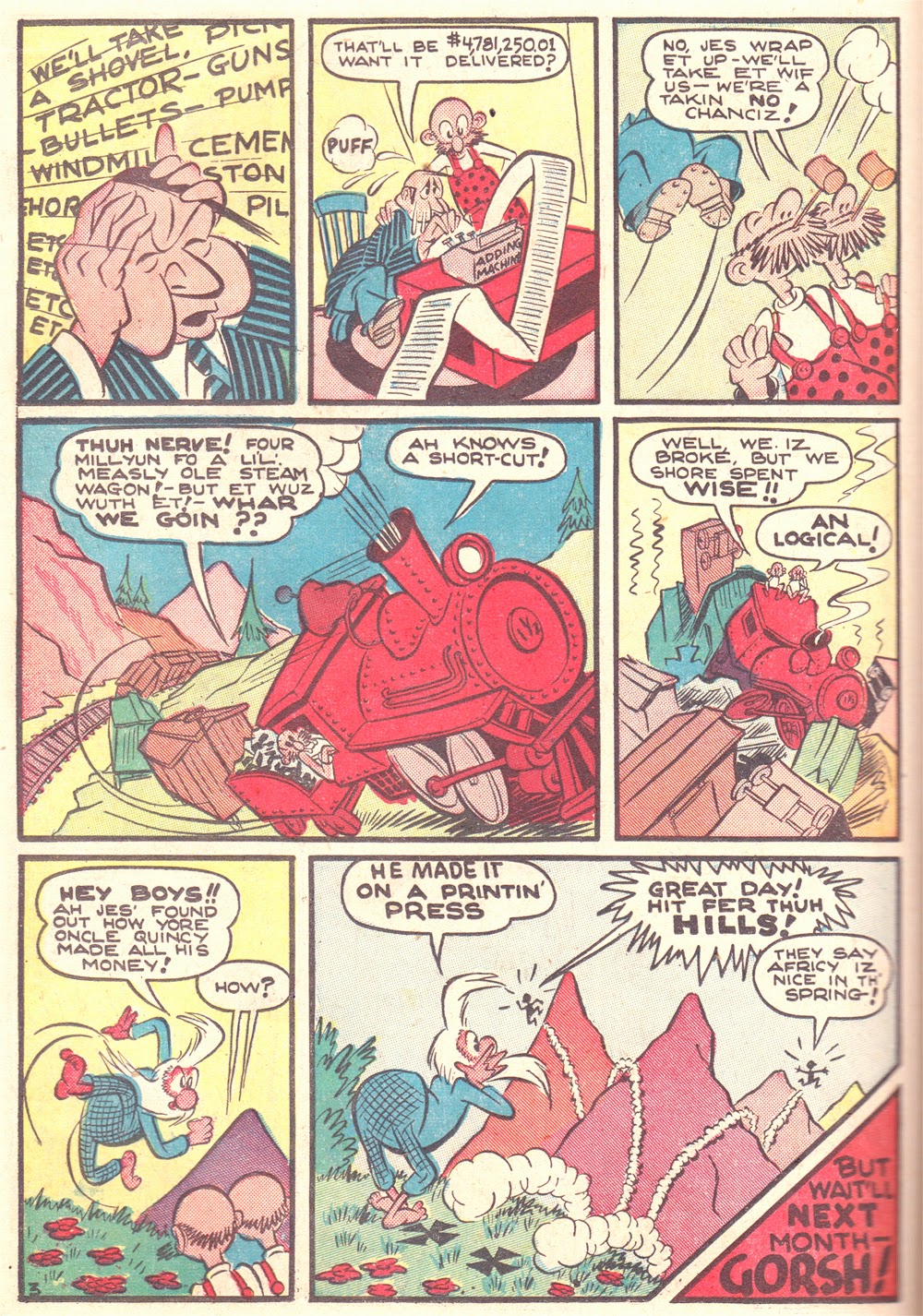 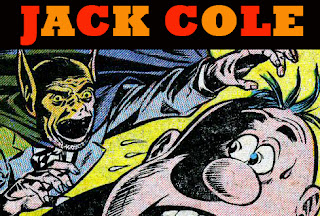 For the last 3 Halloweens, I've posted about the strange, dark last comic book stories of Jack Cole's career as a comic book artist.

This year, I present to you "The Evil Terror?" from Plastic Man #43 (November, 1953). This 10-page saga fluttering around a bat-winged vampire in the best Universal-Studios-Bela-Lugosi tradition is one of the last Plastic Man stories -- perhaps the very last one -- that Jack Cole appears to have created.

As I've written about earlier, the comic book stories Jack Cole wrote and drew in the early 1950s embraced the horror genre with the same verve and intensity that his 1940s comics embraced screwball humor. A strong argument can be made that Cole's 1950s horror stories reflect the undercurrent of anxiety and terror present in Cold War America. These stories are filled with images of people cowering in shadows, frozen with terror.

At some point in the late 1940's, Cole sat down at his drawing table and drew a three panel sequence (one of the many delights that will be found in The Blighted Eye, the upcoming volume by the legendary comics historian, archivist, and collector Glenn Bray) that represented a startling departure from his popular bigfoot-superhero style employed to great success in his Plastic Man stories. The drawings were realistic, not rubbery. In the sequence, a man and a woman embrace in a passionate kiss. The scene is set in a luxuriant, modern city apartment. The panels are filled with delicious black shadows that define the many objects in the room, the drapery of the character's clothes, and even the strands of their hair. On the extreme right side of the sequence, Cole drew a small caricature of himself and penned a note to his Quality Comics publisher, "Busy" Arnold: "Romantical stuff, huh, Busy? Just wondering if you'd like to give me a trial on a serious strip, for a change? Yes? No? I await! Jack"

Cole, an indefatigable innovator, had become interested in creating a new style of comics, with a more realistic feel. Arnold and his editors did give Cole more serious strips -- but instead of romance, they made Cole the signature artist of their new horror title, Web of Evil, where Cole wrote and drew one or two stories for the first dozen or so issues.Some of those stories are reprinted and discussed on this blog. A new volume collecting some of these stories has just been released from IDW, edited by Craig Yoe.

Cole also transformed his Plastic Man stories from baroque screwball comic operas to nightmarish, anxiety-ridden dramas of dread. It was as if Plas and Woozy suddenly began to know the future held nothing but horror -- and they dreaded it with existential despair. Many readers, including me, have missed that these last Plastic Man stories are sometimes (not always) by Jack Cole (often with others finishing the art and inking). In earlier posts, I have explained why I think that certain of these stories, including the Plastic Man horror stories, which I call "Dark Plas" are indeed the work of Jack Cole.

In "The Evil Terror?" Cole once again invests his masterpiece comics creation with some of his trademark screwball humor. It's as if, for this last effort, he had come full circle from goofy humor comics, to dark parables of horror and dread, and then back to humor. As a creator of sequential graphic narratives, Jack Cole was something akin to a roller coaster speeding across the tracks, veering from side to side from light to dark, humor to horror -- and we see that happening in the span of this story.

As a result, "The Evil Terror?" reads overall like an episode of Scooby Doo. As with the popular animated series, it turns out there is a mundane explanation for the seemingly supernatural element in the adventure. The scene on page 8, where Woozy Winks raids the fridge is a parallel to the pothead Shaggy who is eternally cursed with the munchies.

Nonetheless, the story is filled with potent, masterful images of existential terror that are worth your time to peruse, especially on Halloween! 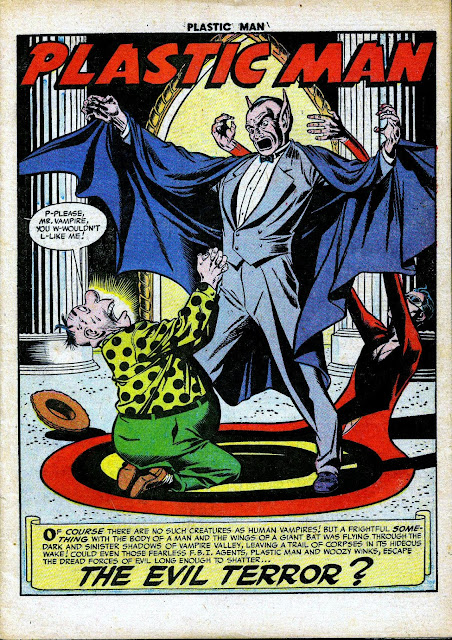 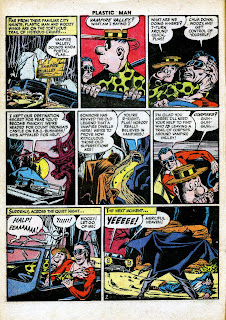 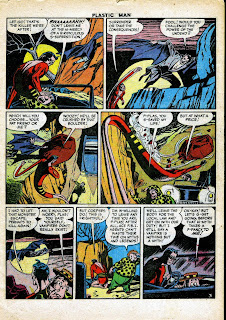 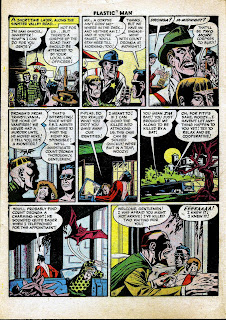 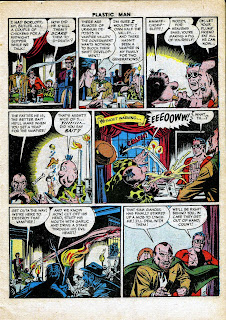 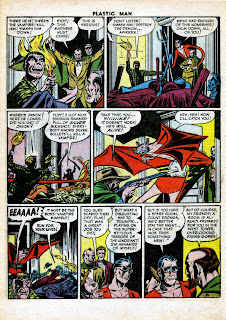 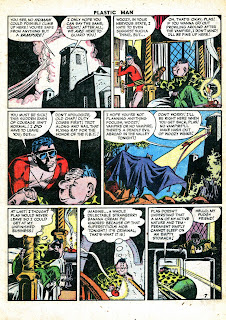 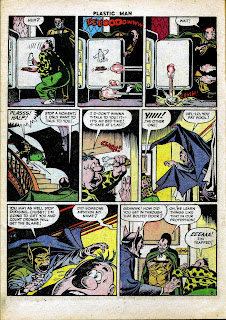 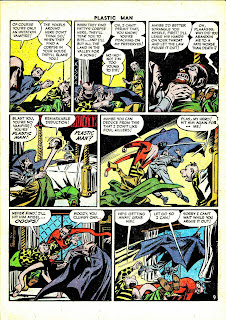 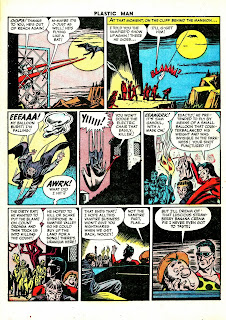