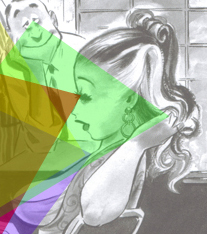 In 2007, blogger Timothy O'Neil published an astute visual analysis of one of Jack Cole's sexy "Jake" cartoons from the early 1950's. In another posting, I'll go more into the history of Cole's career as "Jake." For now, with Timothy's permission, I'd like to share his analysis with you (Thanks, Tim!). Timothy shared with me that this analysis of Jack Cole's composition took a lot of work, and it remains one of his favorite postings.

I've done a few of these visual analysis pieces myself, and I can attest to the fact that they are indeed, a lot of work and require a lot of looking and thinking. Tim's work here is well done and reveals the high level of craft and artistry that Jack Cole brought to his gag cartoon work. Tim concludes his visual essay with  a terrific point, that immediate accessibility is the major goal of most commercial artists. This is an overlooked, but important aspect to Jack Cole's art. His stories and gag cartoons are among the most immediately accessible work done in these mediums. A large part of that has to do with his mastery of composition.

Please be sure to visit Tim's blogs: 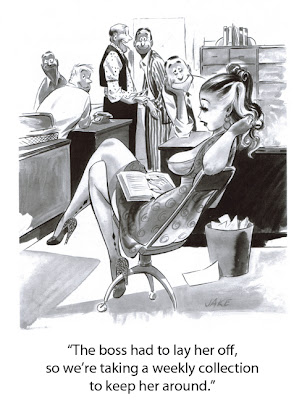 This is a pin-up by Jack Cole ("Jake"), one of many produced for the Humorama line of mens' magazines in the years between his early comic book work on Plastic Man and The Spirit, and the Playboy work that defined the last period of his life. (This piece is excerpted from Fantagraphics' wonderful monograph, The Classic Pin-Up Art of Jack Cole, edited by Alex Chun and released in 2004. It doesn't actually contain any of his Playboy material, unfortunately. Fantagraphics and Playboy recently collaborated on an excellent overview of Eldon Dedini's pin-up art, so the idea of the two publishers one day producing such a volume isn't that far-fetched.)


First, let's look at the general shape of Cole's picture. I've used red to delineate the piece's main focus - a central oblong focal point roughly corresponding to the curves of the secretary's body and the faces of the men crowding the opposite end of the office. Notice how most of the straight lines in the composition are tangential to the area of negative space at the heart of the picture, defining the negative space without violating it. 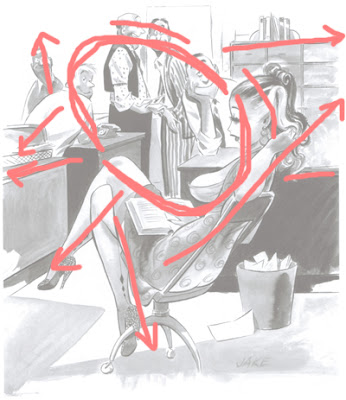 Something which surprised me was how the picture's sight-lines also framed the focal space. Look at how the direction of each figure's gaze also manages to do a great job of pointing the viewer towards where the artist wants the viewer to look. I've colored each character's plane of vision with a different colored triangle - you can see, roughly, that they all overlap at the center of the picture, in a pentagonal figure roughly corresponding to the composition I outlined above. 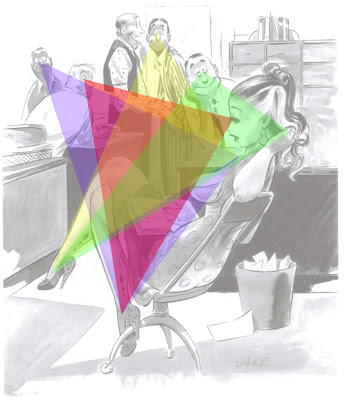 Here, I have colored the picture's three main elements: the figure of the secretary in the center, the furniture in the middleground and the office spectators in the background. Notice how every shape in the picture defines the secretary's figure. The secretary really pops out of the foreground when set against the staid, perpendicular lines of the furniture and her co-workers. 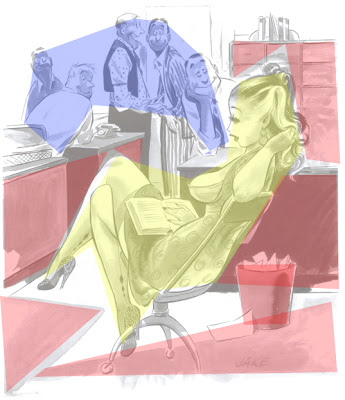 By flipping the colors we see something else entirely: a band of light across the lower half of the picture, roughly corresponding to the ostensible focus point, i.e. the secretary's breasts, torso, hips and legs. In the real piece, obviously, this band of yellow is dark, which also helps to pull the eye down towards the desired focal point. The darkest point of a picture pulls the eye towards it - contrast is one of the illustrator's most potent tools. (This is why flat compositions can present difficulty in terms of immediate accessibility to the viewer. In the case of pin-ups, as well as posters, comic-book covers and album jackets, immediate accessibility is a major goal - if not the major goal - of the artist.) 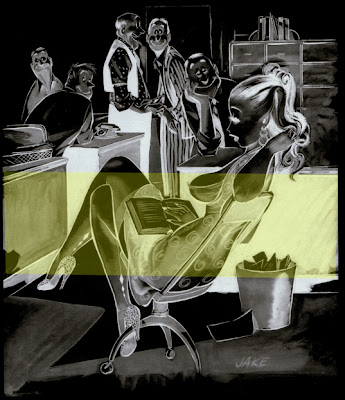 This post is copyright 2011 by Timothy O'Neil.
Posted by Paul C.Tumey
Email ThisBlogThis!Share to TwitterShare to FacebookShare to Pinterest