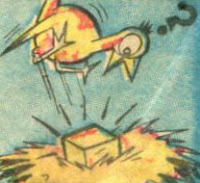 Here's a tasty tidbit for all you fellow cooped-up comic book people who, like me are - unh - scratching around to uncover more Jack Cole comics.

But first, I'll fatten up this lean posting with a chicken story!

I grew up in a semi-rurual setting, outside Baton Rouge, Louisiana. I had some pretty rural kinfolks that we stayed with from time to time. One morning, I woke up in an old farmhouse in Ponchatoula, Louisiana. I went out onto the big wooden front porch and peed into the yard. I said good morning to the fat old alligator in his fenced-in pond a few feet away. Yes, it was THAT rural -- maybe one reason I love Cole's hillbilly comics. Anyway, as I peed, the yard chickens came running up and hungrily pecked at the yellow droplets of urine as if they were corn! I'm not making this up!

That's when I realized that chickens, for all their great value in the food chain,  have rather flawed perception systems.

Jack Cole, however, had a pretty great sense of humor, and a huge love of comics, even when he - uh - winged it. Here's a one-pager from a feather-less (that is, cover-less) comic book that was probably packaged by Harry "A" Chesler, and most likely published by him, too. As usual for Cole, it's jam-packed with 5 one-panel gags and a 4-panel strip.The jokes are all pretty - unh - corny.

We don't have a title or date for this one. My guess is it's around 1940. But really, at this point, we have no hen-ts to go on. At least, we can appreciate the sublime silliness of an entire page of chicken gags! It shows that Cole had a rather egg-zacting sense of humor: 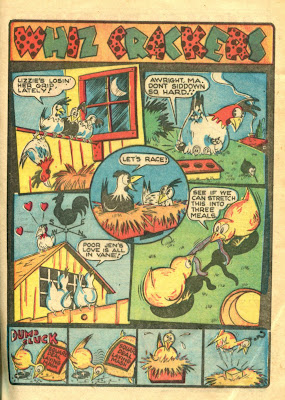 The bottom strip is Jack Cole's own square egg comic book story, a concept that Carl Barks fully hatched years later in his classic "Plain Awful" square egg story ("Lost In The Andes, April 1949). And, lest you think I'm cracked in identifying this unsigned page of fowl humor to be by Jack Cole... one of the many tells is the patterned title lettering. This elaborate, distinctively-shaped lettering is similar to the title art from the last story in Plastic Man #2 ("Coroner's Corners", circa 1944). Here's that unforgettable splash page, for comparison: 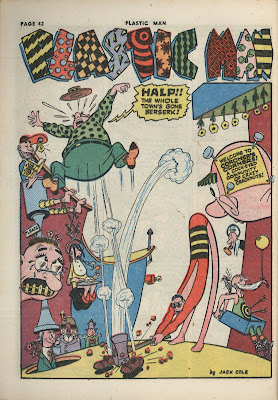 I guess that's why we love the man's work: it's pretty -- clucked up -- in a beautiful way.

ANNOUNCEMENT! My two Midnight ebook collections, Volumes 1 and 2 are on sale for only $2.99! See the right-hand sidebar (or click "web view" if you are browsing on a mobile phone). Buy today for -- cough, cough -- chickenfeed!