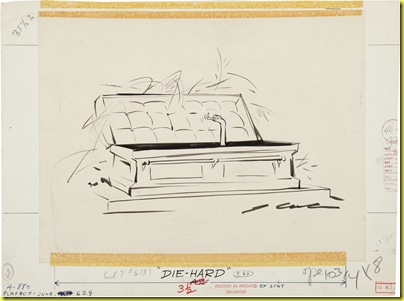 Of special interest to readers of this blog is the 6th Jack Cole piece, “Die Hard” (Playboy June, 1957) one of the famous FEMALES BY COLE series, which remains unsold and available for purchase as of this writing for $1,195.00.  Click here for details.

The pieces were part of a large collection of approximately 100 cartoons from the Playboy archives by various artists (the collection can be seen here). By far, the highest price realized in this collection was about $180,000, for a Vargas girl cartoon. 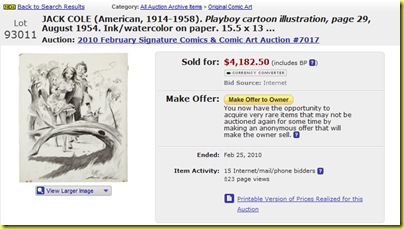 Readers of this blog will recall an earlier posting announcing the appearance of the above cartoon on Heritage’s auction block. This item got the most page views of all the recent Cole auctions, at 825, and sold for $4,182.50. A full study of this cartoon and a scan of the original art can be found in my article, A Moment Frozen In Time.

The prices realized on the Jack Cole cartoons were respectable, but remain a bargain. By contrast, color cartoons by Gahan Wilson sold for about 75% of the highest bids on the Cole cartoons, while Leroy Neiman black and white drawings featuring his black-stocking-clad Playboy girl sold for about 150% more.

The prices paid for Jack Cole’s cartoons do not reflect his status as Playboy’s signature cartoonist and a major figure in American comics history and popular culture, and consequently represent a great bargain for the lucky winners of these auctions. 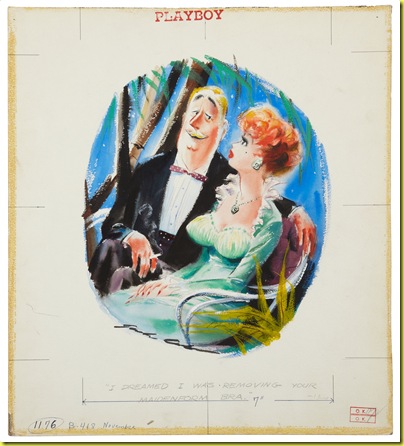 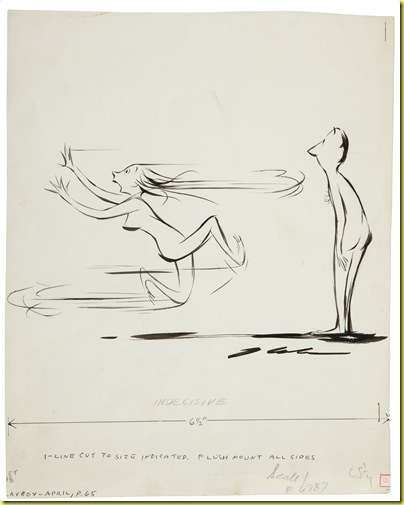 As well, scans such as the one above reveal how loose and free Cole’s brush work was in this series. 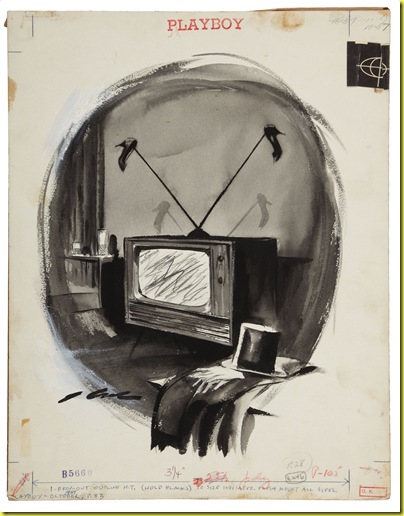 In stunning clarity as well is Cole’s amazing wash technique, which he developed in his “Jake” Humorama digest cartoons of the 1940’s and early 1950’s. Note the use of white paint. It’s also neat to see the various notes on the boards, mostly instructions to the printer. 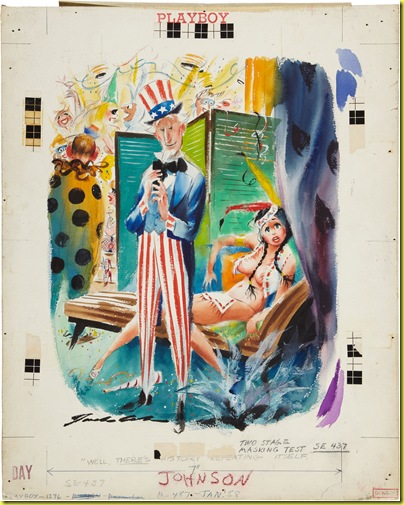 The auction included one of Cole’s greatest cartoons (above), a rare instance of Cole making a political statement in this format, but mainly just an inspired gag and a great painting. Look at this one close up and study the wild color palette!

The surfacing of six original pieces of Jack Cole art on the auction block is genuinely rare. In fact, out of over 40,000 lots of original cartoon and comic book art recorded on the Heritage Auction Galleries website, only 10 have been for Jack Cole items.

If only Quality’s publisher Everett “Busy” Arnold had preserved Cole’s original comic book pages! The story goes that he personally cut up every page and trashed it to prevent others from being able to publish the stories. Given that a few pages of original art from Quality comics have appeared in Heritage’s auctions, such as pages from editor Gill Fox, it seems a distant possibility that a few Jack Cole pages may have escaped Arnold’s scissors and been saved by a Quality editor or staffer and we may yet one day be able to study an original page by Jack Cole from a PLASTIC MAN story!

Until then, my dear readers, yours truly will continue to chip away down here in the Cole-mine and emerge, covered in musty pulp, from time to time with lost treasures.

Coming soon: some rare Cole one-pagers and a study of his connection with Quality editor Gill Fox!