My friend and fellow comics history writer Frank Young (see his great Stanley Stories blog) has shared his latest comics discovery: a previously unknown comic strip by Jack Cole. Frank tells he found this in a stack of discarded newspapers some time ago and forgot about it until it recently re-surfaced during a move. Here’s the comic: 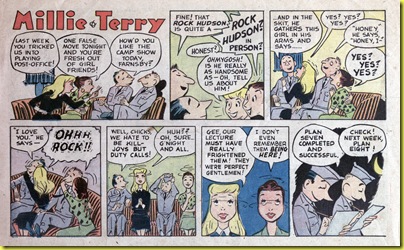 Here’s Frank’s notes:
“Here is the one known episode of Jack Cole's Millie and Terry newspaper strip.I've also scanned the top of the front page of this sorry-ass military comics section, The American Armed Forces Features, and its mysterious hand-lettered indicia. 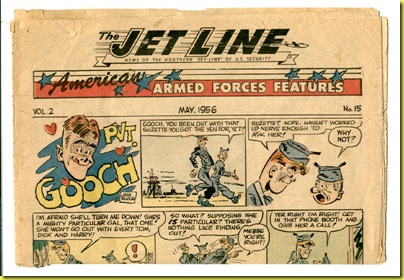 "Google searches reveal nothing about this publication. One can assume it was a monthly newspaper.
Jack Cole's strip is unsigned, but bears his stylistic signature quite heavily. It's a lost link between the Playboy cartoons and BETSY AND ME.


"Cole's is the only notable work in this 8-page tabloid, which I found in a garbage pile in 1971. All the strips have military themes, and cover Army, Navy, Air Force and Marines. On the front page you can see part of the primitive Pvt. Gooch by Jess Benton.

"One can only wonder how long this publication lasted, and how long Jack Cole's spot in the comics section spanned. It's a nice little gag, with Females by Cole, tell-tale "tremble lettering," and an elegant, simplified approach to cartooning that still retains a flavor of his 1940s work.”

Thanks very much, Frank, for this lost gem you dug up from the Cole-mine! I agree that this is a link between Cole’s Playboy cartoons and his better-known BESTY AND ME comic strip.

It seems that Cole developed more than one comic strip idea, which was submitted to a totally different market. This fits with what we know of Cole’s restless ambition. In addition to the identifiers that Frank Young notes, the strip also bears the hallmark of Cole’s work in that it somehow has more content, and feels like there’s more plot and depth to the characters than one would expect from a story of this length.

Additional note (Sept. 2011) - Thanks to the helpful information provided by folks in the comments section, it would appear that there were perhaps at least 9 installments of Millie and Terry, from April, 1956 to December, 1956. If Cole did all nine strips, then this would stand as a terrific "lost" find!

If anyone out there has further examples of this strip, we’d love to see them!
Posted by Paul C.Tumey
Email ThisBlogThis!Share to TwitterShare to FacebookShare to Pinterest