You might think I'm obsessive, but I actually counted the jokes in Jack Cole's remarkable 2-page story from 1943, IKE AN' DOOIT, and came up with the astonishing number of 28!

In this inspired bit of war years lunacy, Cole managed to work in puns, a jingle, bondage, murder, a crazy invention (electric backscratcher), nudity, a couple of mind-boggling meta-jokes (in which the characters show they are perfectly aware they are in a comic strip), and even a bubbly burp.

Here's the strip... thus far only available as a cleaned-up microfiche scan, but so remarkable that it's worth reading, even in the muddy fiche version: 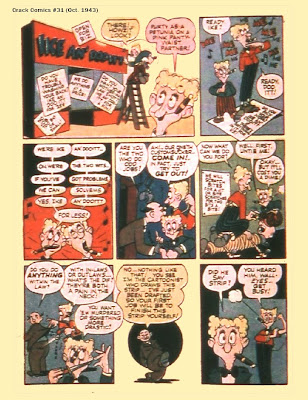 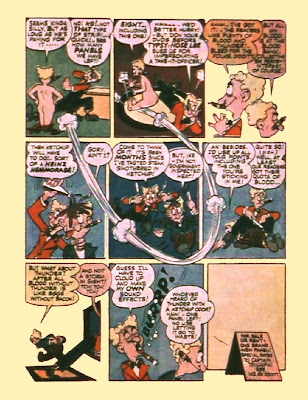 Pretty amazing stuff, huh? Cole's characters appear to be amalgamations of the then popular comedy team, The Marx Brothers. Specifically, Cole has combined features of Groucho and Harpo, the two middle figures in this publicity photo. 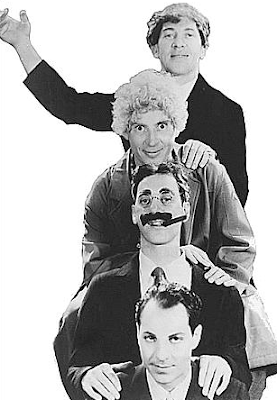 The Marx Brothers made films from 1929 to 1949, and very likely were a major influence on the development of Jack Cole's comic sensibilities, with their rapid-fire surreal nonsense, and set pieces for comic improvisation. In this cartoon portrait of the team by Al Hirshfeld (done many years after Cole's work), you can see the natural visual impact of the character designs that Cole played with: 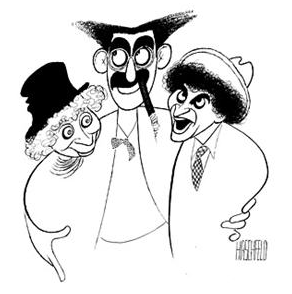 Though we have here a comedian working in the medium of graphic storytelling and inspired by film... the Marx Brothers actually derived their names from a comic strip! From 1904-22, Gus Mager ran a series of newspaper comic stories in which he parodied detective stories and Sherlock Holmes. He put an "o" after the character's names: Knocko the Monk, Sherlocko the Monk, Watso (for Watson) and so on. The Mark Brothers borrowed this idea, naming themselves: Groucho, Harpo, Chico, and Zeppo.

There is wonderful website called Barnacle Press that reprints many great old comic strips, including a series of Gus Mager's strips. Here's one I enjoyed:

Mager's characters were vaguely simian, hence the name "Monk." It's interesting to note that a currently popular (and one of my favorite) comic detective TV shows is called MONK.

Cole would return to the idea of two guys who would do any job that needed doing about 3 years later, with his ODD JOBS story in All Humor #1 (click here to read). Even the splash page of ODD JOBS resembles the opening panel of IKE AN' DOOITT. 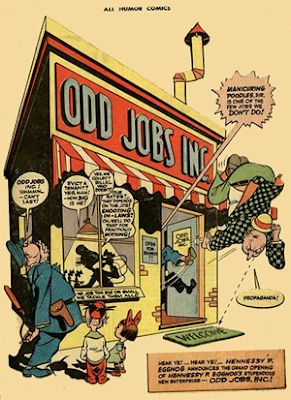 Sadly, just as his IKE story was a one-time deal, so ODD JOBS only lasted for one story. Sigh.

Cole had used the astonishingly effective device of a character zooming out of the panel and across the page about a year earlier, in a MIDNIGHT story that appeared in Smash Comics #37 (Nov. 1942), available for reading here.

Before we end this posting, I wanted to call your attention to the new donation button at the top right corner. A few folks have asked me how they could support this work, and so I've put up a donation button. Don't feel obligated, but if you're flush and of a mind to help a starving writer out, click away! Speaking of clicks, another good (and free) way to help any blogger is to click on the advertising links they have up. I'm just sayin'... cough, cough...

In page two, panel two of IKE AN' DOOITT, there's a reference to "Typsy Hose Lee." Jack Cole is referring to perhaps the most famous stripper of all time, Gypsy Rose Lee. Just for a fun way to end this post, here's a photo of the lovely Miss Lee. That dooitt! 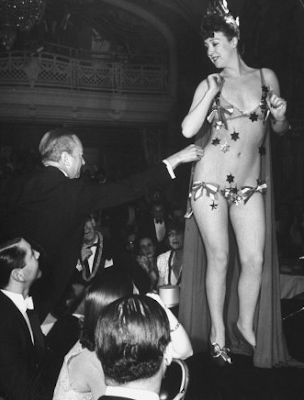