We've looked at some memorable early stories Jack Cole created in which the action centered around speedboats. There's Cole's single Quicksilver story, his landmark fourth Midnight story, and in our previous post, we saw a mind-blowing Midnight story involving a speedboat that traveled on land. Having established Cole's fondness for speedboat stories, here now is, as far as I can tell , his very first speedboat story: the third episode of his highly entertaining DICKIE DEAN series.

I'm not sure why Cole was so fond of drawing speedboats and water. Perhaps there was a flood in his hometown of New Castle, Pennsylvania when he was a child, or perhaps his Dad had a speedboat. In any case, there is a strong sense of place in this story, which makes it even more vivid than ever. This story reminds me of the more recent, but equally entertaining story, Won't Be Licked; The Great '37 Flood of Louisville, by one of my favorite modern cartoonists, Dan Zettwoch (the story appeared in The Best American Comics 2007, Chris Ware, editor).

Perhaps Jack Cole's interest in speeboat stories was purely graphical. If you study these stories, you can see that he used the boats as pointers on the page layout, directing the eye effortlessly to the next panel. The result is a sense of movement that is often exhilarating.

This story stands alone in the DICKIE DEAN series. It's the only one of the eight that Cole did in which Dickie's friend/sidekick doesn't appear. Instead, there is a genial, faintly Dad-like newspaper reporter named HAP who joins Dickie on his adventures. I like the chemistry (if you'll pardon the pun) between these two characters and I wish Jack Cole had explored this duo more. Alas, this is the only story in which HAP appears.

Like many of Jack Cole's comic book stories of 1940-42, there is a way cool information drawing, explaining the main invention, a boat that can make water disappear by running through it: 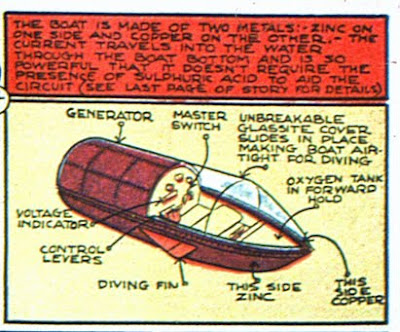 There are also several other fun inventions in this story, including an automatic apple dispenser, an accordion hat retriever, and an acid-spewing fountain pen. Cole also speaks directly to his boy readership at the start and end of this story, proving no small amount of enthusiastic encouragement to invent. Cole's words are so compelling, that I felt myself growing keenly interested in inventing something as I read the story!

Another hallmark of Cole's work is an interest in using decorative patterns to provide visual richness (such as Woozy Winks' polka-dotted blouse). In this story, he uses the diffusion of the water molecules as an excuse to populate several panels with wonderful arrays of floating spheres of water. The effect is magical, like something out of LITTLE NEMO: 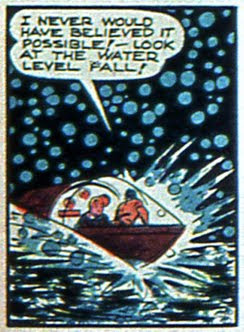 In addition to the Dickie Dean story in this issue, Jack Cole also delivered the lead feature, a ripping Silver Streak adventure (which I'll share at a future posting). Cole was the editor of this title, and in addition to his two stories in this book, he also turned in a wonderful cover: 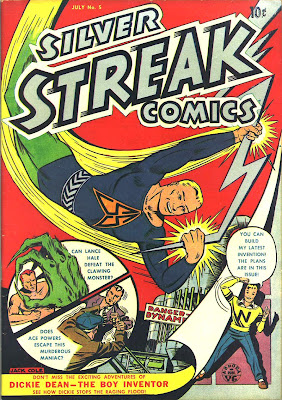 Note Dickie Dean in the lower right-hand corner, the only time Cole drew his full figure on a cover.

By the way, have you checked out my pal, Frank Young's superlative articles and reprints of some great Jimmy Thompson ROBOTMAN stories at Cartoon Snap? If not, be sure to hop over there once you've finished reading this amazing DICKIE DEAN story... you'll be glad you did. Thompson is the most under-appreciated artist of the Golden Age, and Sherm's Cartoon Snap blog is one of the best out there!

Just an aside: if you happen to be enjoying a scan blog and see some links to ads posted, clicking on a few is an easy way to help support that blog, since the blogger will get a little dinero for each click. Just a suggestion. We're not supposed to solicit clicks for ourselves. I just wanted to raise general awareness of this issue. For example, out of 15,000 page impressions on this blog there have been only 8 clicks on the advertising links! I always make it point to click a few times to help the blogs I like... it's the polite and helpful thing to do!

Here then, is the third Dickie Dean episode, another lost gem, excavated for your reading pleasure from the Cole-mine! 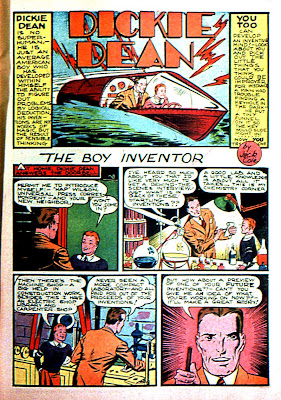 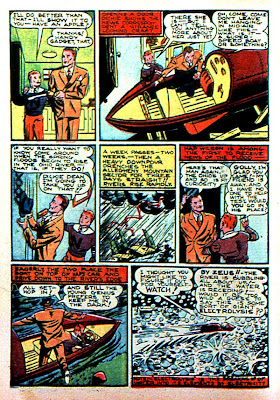 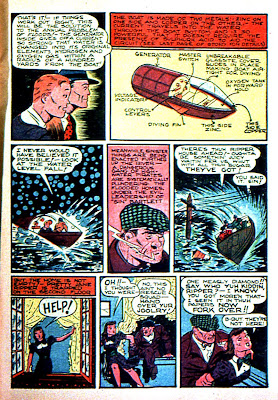 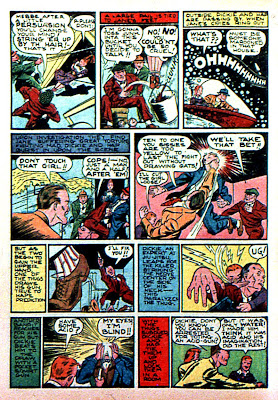 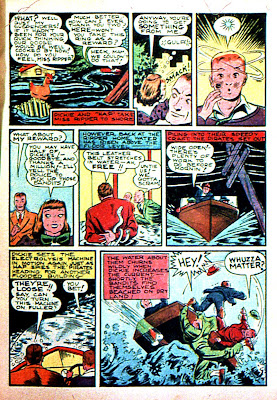 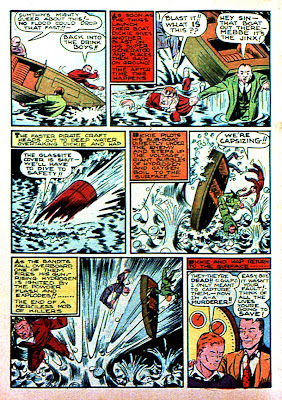 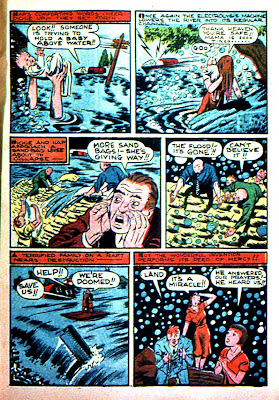 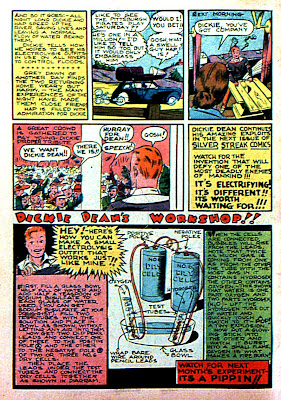