Story presented in this posting:

Every so often in our extended study of Jack Cole, it will prove insightful to consider what his influences might have been.

The greatest screwball comedy strip of all time, SMOKEY STOVER by Bill Holman, began appearing in newspapers in 1935. That was the year Jack Cole left his home town in Pennsylvania for the urban canyons of Manhattan to seek fortune and fame as a comic strip artist. Much like Cole's early work, the Smokey Stover dailies and sundays were jam-packed with gags. Some of the gags were visual puns, some were verbal, and some were just pulled out of the ether, such as the repeated use of the word "foo." Holman, shown below, was a true master of the form and it seems very likely Cole was influenced by his work.

It may be that Holman, who was 11 years older than Cole, blazed a path into fast-paced screwy satire on which Cole followed, paved, painted, and installed street signs. 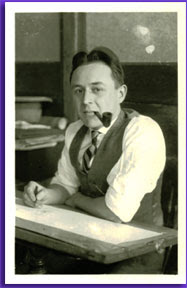 Smokey Stover was a fireman, and often the strips involved the characters frantically running to put out a fire, exchanging vaudeville-style jokes as they zipped along. You got your money's worth with Smokey Stover, since Holman often stuffed his pages with jokes. I count 13 jokes in this 6-panel sunday strip, taken from Four Color #64 (Dell, no date on the issue), one of several Four Color issues devoted entirely to reprints of Holman's work.

Compare to Jack Cole's zany one-pager below, from Blue Ribbon Comics #2 (Dec 1939, Archie). Cole contributed 17 pages to the first issue of Blue Ribbon, and 6 pages in the third issue, before moving on to bigger and better things. He only had one page in Blue Ribbon #2, but what a page! Aside from what must surely be one of the strangest panel layouts of 1939, what strikes me is the strong similarities with Smokey Stover. Our characters are running with Holman hoses to put out a fire, the knight inexplicably has a weather vane on his head, and there's a flash fire of jokes.

If you'd like to see more of Bill Holman's brilliant work, be sure to visit http://www.smokey-stover.com/, created by his nephew, Victor Paul, and loaded with great Holman comics. Here now a little gem by Jack Cole, no doubt inspired by the wacky work of comics master Bill Holman.