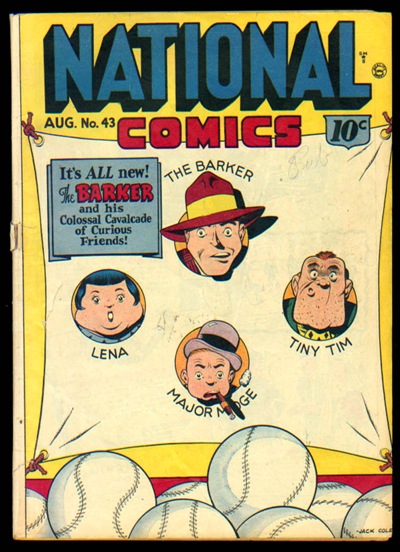 Jack Cole and writer Joe Millard really stepped up the plate with their second and last BARKER story. (For more information on Millard and the first Cole Barker story, see here)

This story has more of what I’d expect a in series set in a carnival mileau. Millard did his research. The carnies in this story talk more realistically, using carnie slang, such as “gaff,” “rube,” and even “freak” (as in sideshow attraction). There’s an advance PR man, and even a toned-down snake dancer makes an appearance.

The story’s set-up is classic carnie lore, with the show coming into in a town that can barely tolerate them and on guard for any robbery or foul-play. This story conflict was beautifully depicted in the little-known movie Carny (1980) starring Gary Busey and Robbie Robertson (former member of The Band and an ex-carnie himself). Carnival fans might enjoy seeking this obscure gem out.

Millard cleverly opens the story with The Barker enticing his audience into the sideshow for the price of “one thin dime,” but also luring the reader into the comic book, which also cost only a dime.

Cole’s splash page, while a little visually confusing, clearly represents a step up in effort from the previous story, and is an extraordinary opening page, by any standard: 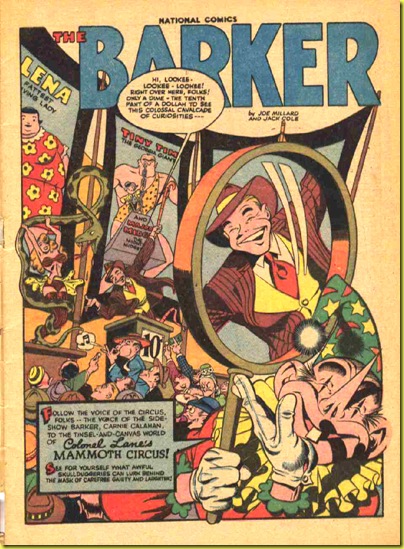 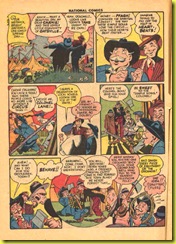 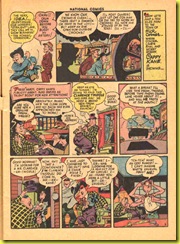 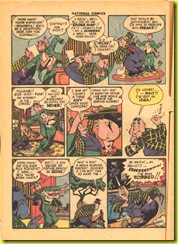 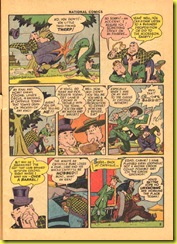 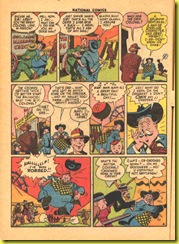 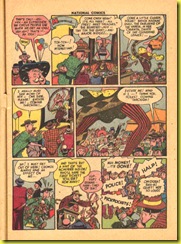 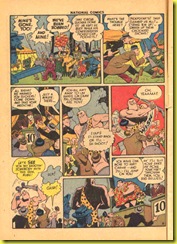 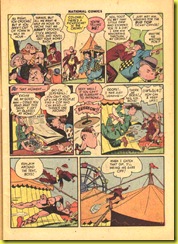 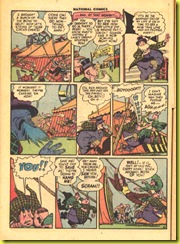 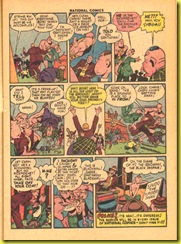 As far as I know, this may well be the first appearance of the Spider-Man concept, albeit in a radically different conception. I wonder how Joe Millard felt in the 1960’s when the Ditko/Lee version became a smash hit. The Barker’s Spider-Man, Clarence Twiddle, became a regular in the cast after this story.

It is interesting to note that the character of the rival carnival’s PR man, Press Hardt, resembles a slicker, more evil Woozy Winks.

Cole’s artwork in this story is rich with Americana details. In this respect, the work reminds me of his later Angles O’Day series, as well as his Augie Moore and The Teen Terrors one-shot.

While Cole’s wild, imaginative bent is “hobbled,” as one reader commented on the first Barker story, the art also feels more disciplined, and is evidence that Jack Cole was working hard to harness his immense talent toward the end of creating a quality (no pun intended) product that represents something other than his sole vision.

During this same period, Cole was ghosting on Will Eisner’s Spirit (for examples of this, see here), yet another instance of the inspired artist re-shaping his style and approach to fit into a different mold.

1944 was indeed the year Cole graduated from being a wunderkind tyro cartoonist to a true industry pro. It was the mid-point of his 16-year career in comics. While so many of his peers were away at war, Jack Cole stayed behind somehow, taking on large amounts of the extra available work to build up a savings in case his number was called for military service (it never was).

Shortly after this period, the restless, ever-shifting Cole would develop a second career selling sexy gag cartoons to men’s magazines which would eventually lead to his famed work as Playboy Magazine’s premier cartoonist in the 1950’s and a whole new level of income and lifestyle for him and his wife. His work on Plastic Man would be diluted with the hands of others, although Cole would occasionally surface with a brilliant new Plastic Man story.

Starting with the next issue of National Comics, Klaus Nordling took over the writing and art duties and made The Barker into his own, wonderful, offbeat series. In my next posting, The Barker Part Three,  I’ll look at a Nordling Barker story, ponder the similarities in his and Cole’s styles, and analyze a story from The Barker #15, that appears to be a possible collaboration between Cole and Nordling!

Though he didn’t draw any more Barker stories, Cole contributed several more covers for the series. I’ll leave you with a gallery of these fine Jack Cole covers. 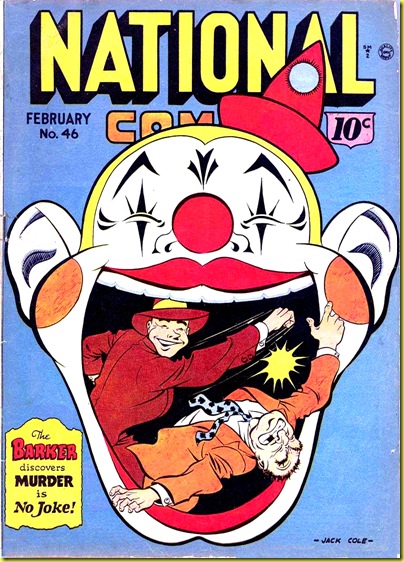 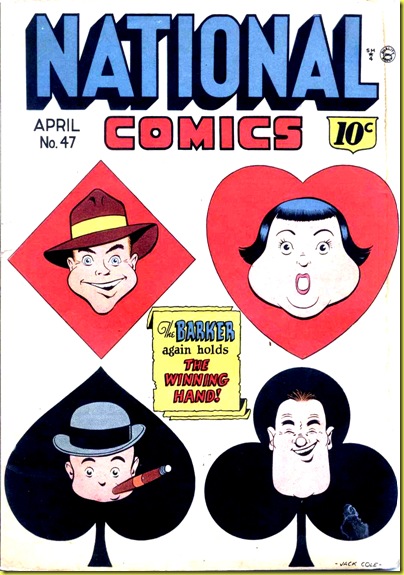 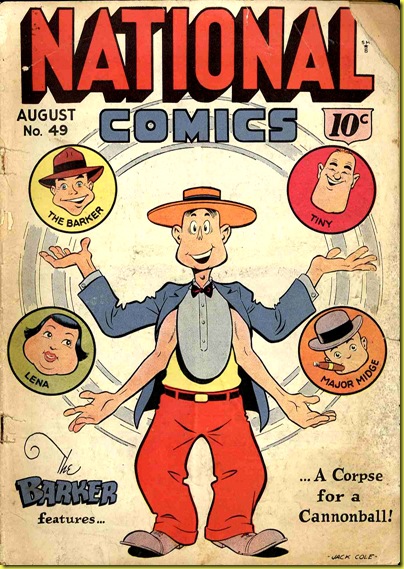 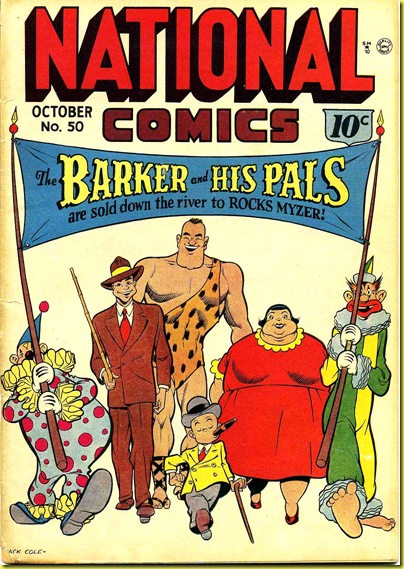 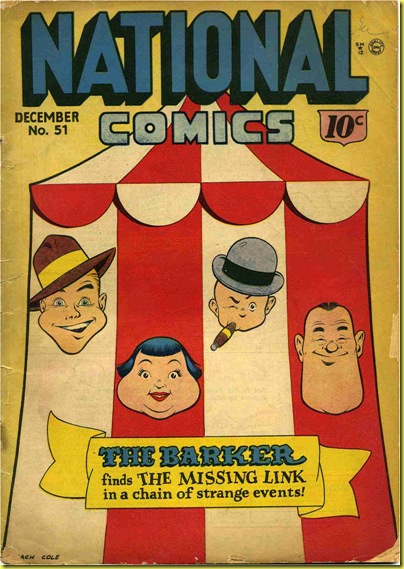