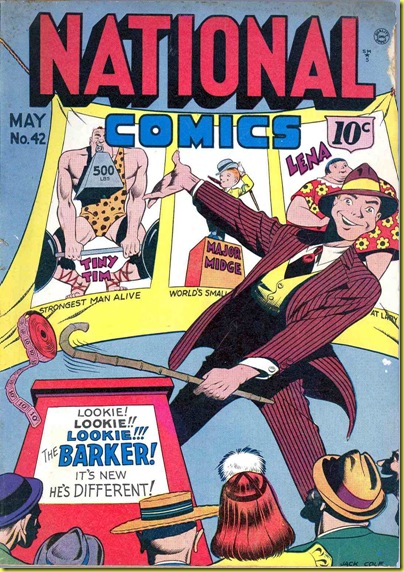 A special thank you to reader Constantine for his donation and support of my work on this blog! Much appreciated!

Jack Cole’s two BARKER stories represent a major turning point in his career from being the solo artiste genius who wrote, lettered, penciled, and inked his own stories to an accomplished professional working with collaborators.

Prior to 1944, Jack Cole’s comic book work is purely his. After 1944, mainly due to the popularity of his Plastic Man series and the demand for more pages than Cole could single-handedly produce, his stories are sometimes collaborations with other writers and artists.

It’s sometimes recounted that, when Quality publisher Everett “Busy” Arnold told Cole Plastic Man would be written and drawn by others, Cole burst into tears.

Prior to that, however, Cole’s first collaboration was with writer Joe Millard on the first two stories of The Barker (National Comics 42 and 43). The stories are very conspicuously signed and credited to both men. Were the publisher and editors at Quality easing Cole into the idea of collaboration?

This first story introduced the lively world of Carnie Callahan and his unusual friends. Callahan’s job as a carnival barker was to shout at passers-by and lure them into the sideshow, where they would see the fat lady, the strong man, and so on.

This was a rather unusual concept for comic books at the time, and represented, I think, the start of a shift in comics to light-hearted adventure stories as WWII wound down and comics were no longer driven by the vast propaganda efforts of 1942-43.

This story may well be the first time Cole drew a story he did not write. His art in this story is very tight and polished. He may well have poured the energy he usually reserved for writing into the art. His staging is rich with detail and unusual camera angles. Cole’s lively art style perfectly suits the world of the carnival sideshow.

It may well be that writer Joe Millard presented Quality comics with a Barker concept or even a script as a way of breaking into Quality. It’s easy to imagine an editor deciding that Jack Cole was the ideal artist to draw a comic book story featuring bizarre characters in a colorful setting.

In any case, this story is fascinating for a Jack Cole fan to read because it’s kind of a “lite beer” version of a typical Jack Cole story. This story shows just how much magic the organic combination of BOTH Jack Cole’s writing and drawing brought to the printed page. Here, with just Cole’s drawing, the story is pleasantly entertaining, but lacks Cole’s weirdness and his driven need to explore certain darkly compelling themes.

I’m happy to present to you now the debut story of The Barker, with additional notes on author Joe Millard following: 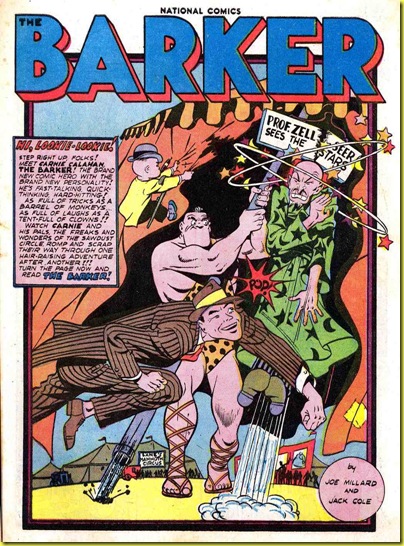 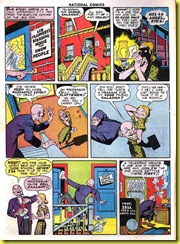 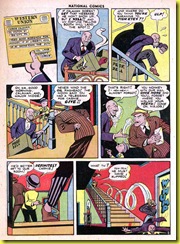 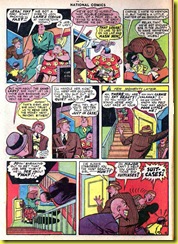 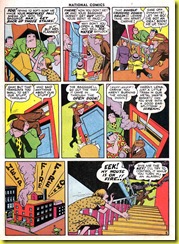 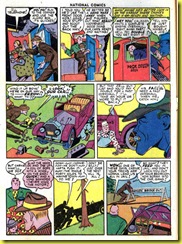 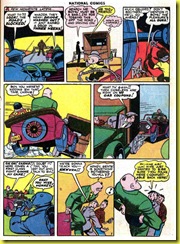 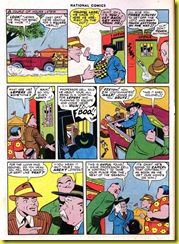 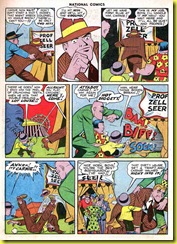 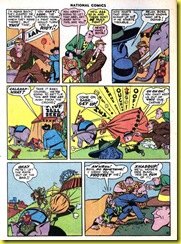 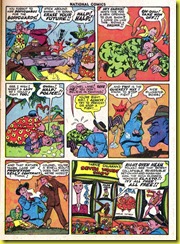 You’ll notice that, in the last panel, Millard and Cole cannot resist throwing in a sly in-joke reference to Plastic Man, who was originally going to be called “The India Rubber Man.”

Joe Millard’s writing career spanned from the 1940’s to the mid-60’s, and possibly beyond. Born in 1908, Millard wrote for comics and magazines alike. His writing credits in the Grand Comics Database (71 as of this writing, but very likely he wrote far more comic book stories) include work in the early forties at Fawcett, including stories in Captain Marvel Adventures, Mary Marvel, and Captain Marvel Jr. 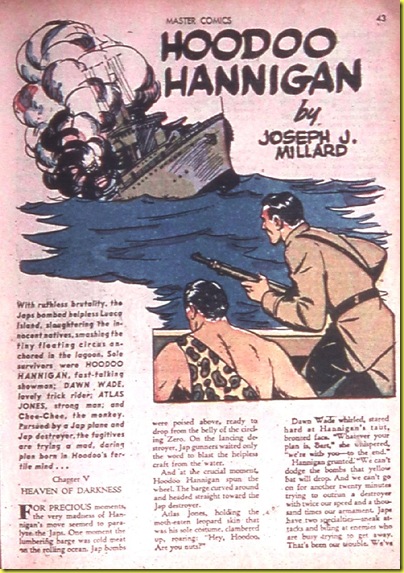 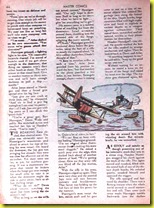 for Fawcett in the early 1940’s. In Master Comics, he appears to have had an unusual serialized adventure story featuring a wartime pilot named HOODOO HANNIGAN. The text pieces ran for several issues, each appearance being a chapter in what was likely a long, pulpish novel. The HOODOO HANNIGAN  stories were 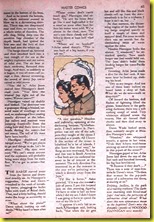 also unusual in that they ran three pages, instead of the customary two pages, the minimum amount of text required by the post office to grant a bulk mailing license (the sole reason pre-1970 American  comic books included two pages of text, in later years usually a letters column or at Marvel, Stan Lee’s shamelessly promotional Soap Box).

You can see a similarity between Millard’s imagination and Jack Cole’s in this striking “Red Skye” one-page text feature from Captain Midnight #23 (Fawcett, August 1944): 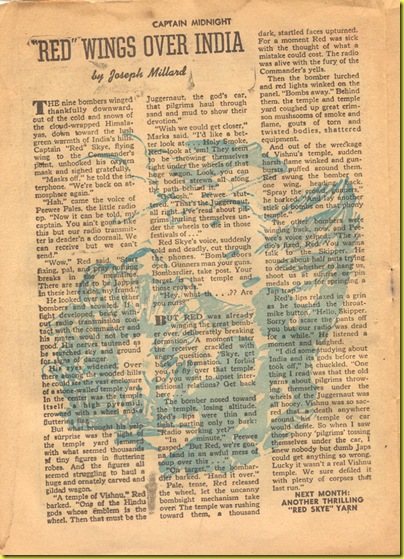 The idea of a bomber blowing up a Buddhist temple caught my attention. The last two lines, “Lucky it wasn’t a real Vishnu temple. We sure defiled it with plenty of corpses that last run.” were so similar to Jack Cole’s writing that I briefly entertained the idea that Millard might actually be a pen name for Cole. As it turns out, Millard continued to produce past 1958, so he was definitely NOT Cole!

Millard scripted stories at Quality for BLACKHAWK, KID ETERNITY, and PLASTIC MAN, among others. In fact, I was quite surprised to read in the Grand Comics Database (which is not necessarily always correct) that Millard is credited with scripting some of the most memorable later Plastic Man stories, including some you, dear Cole fans, will very likely recognize:

All of the above stories were reprinted in DC comics in the early 1970’s, and I suspect have been widely regarded as some of Jack Cole’s best stories. It’s kind of a shock to consider that they may have been written by someone else.

The above stories with their themes of suicide and shape-changing seem to me to be products of Jack Cole’s mind, but perhaps I am wrong.

Considering the rest of Millard’s output, these superb Plastic Man stories he may have written (I’m not ready to fully agree that he wrote them) may well represent a high point in his career. 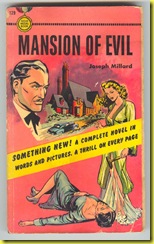 What IS known  and can be validated about Millard’s work is that he was the author of what is now considered to be one of the earliest, if not the first graphic novel, a 4x7 inch standard paperback called Mansion of Evil (Fawcett, 1950). Modern day comics master Seth, in his wonderful little volume Forty Cartoon Books of Interest, calls the book “dreadful,” “dull,” and “hackneyed.”

n 1964, Millard published a real live science fiction paperback original with what has to be one of the best or worst titles ever, depending on your viewpoint, The Gods Hate Kansas. I haven’t read the book, so I cannot attest to its quality. It was made into a reportedly terrible (Seth again) movie called They Came From Beyond Space. I much prefer the original title!

In the 1960’s, Millard returned to the Western genre and wrote a handful of paperback novels based on the popular “Dollar” movies of the times made by master Italian filmmaker Sergio Leone and starring Clint Eastwood. The books, which include one called A Coffin Full of Dollars, are reportedly “absurd” by one Internet poster.

That’s what I know about Joe Millard, except that he may have scripted the DICK TRACY newspaper comic strip, as well. See also Jerry Bail’s Who’s Who in Comics entry for Millard here.

The idea that Joe Millard may have written some of the best later Plastic Man stories is certainly intriguing, and a question that I hope can be resolved with certainty one day.

Next post, we’ll look at the second Millard/Cole BARKER story, and take another glance at how Jack Cole and Klaus Nordling’s careers, and styles intersected.