Jack Cole's work had -- and continues to have -- appeal in part because his work is a heady combination of screwball comedy and the darker side of human nature. It's a mix that shouldn't work, but somehow this one great cartoonist pulled it together.

The Landon School of Cartooning was a prime influence on Jack Cole's development as a screwball, "bigfoot" cartoonist, as we've previously noted.

Below, you'll find an informative and insightful 2009 10-minute documentary  well worth watching about the Landon School and it's influence. The documentary, produced by Enchanted Images, Inc., notes that Jack Cole, among many other notable American cartoonists, took the 28 lessons of Landon School of Cartooning's correspondence. 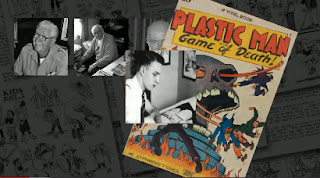 The documentary, created by artist and writer John Garvin at Enchanted Images (check out his new book, After Carl Barks), points out that the Landon course presented a practical approach to newspaper cartooning, so that "a young kid, working from home, could become a famous cartoonist with nothing more than Landon's lessons, some pen and ink, paper, sweat, and a little talent."

According to Jim Steranko's History of Comics Volume 2, Jack Cole did just that. Seeing an ad for the course, Cole asked his father, who was a hard-working father of 6, to pay for the course. When his Dad refused, the endlessly inventive Cole found a way. He began to sneak down to the kitchen in the middle of the night and quietly make a sandwich to take to school the next day. Cole smuggled the sandwiches to school in a hollowed-out textbook. In this way, Cole was able to save up his lunch money and eventually pay for the course, which, according to Cole's colleague and editor at Quality, Gill Fox, cost around $8 -- or $20 if you wanted to send your work in and get Landon's notes on it.

Garvin's documentary explains how Landon's method of cartooning differed from previous approaches and textbooks on cartooning. Instead of basing the figure drawings on a careful study of human anatomy, Landon developed a way to create humorous pen-and-ink drawings of people with stick figures and basic shapes. It seems to me that learning to cartoon using the Landon method may have freed Cole (and others) from focusing on representational images, allowing him to stretch and distort his figures, as he did so brilliantly, particularly in his Plastic Man stories.


In 1937, Cole created a rather brilliant one-sheet summation of the Landon approach to cartooning: 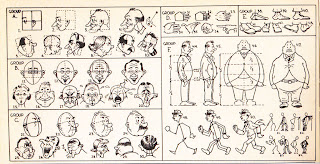 It's my theory that Cole may have created this one-sheet to self-publish and sell to make a few bucks. In 1937, he had moved from his home town in New Castle, PA to the big city -- New York -- with his new wife, to make a career. This instant cartooning course may have been an attempt by Cole to create an income. If so, it appears to be the only known time that Cole dallied with publishing, as the rest of his known career was as a freelancer and staff artist.

Here's a wonderful 4-page Jack Cole comic book story, appearing for the first time in this blog. It's taken from Ron Goulart's book, Focus on Jack Cole, hence the black and white printing. The influence of the Landon School of Cartooning is very evident in this early work by Jack Cole: 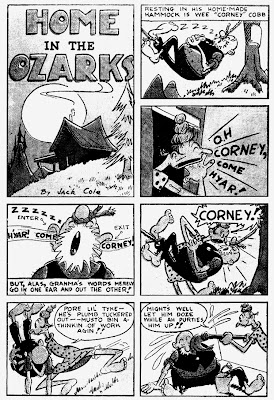 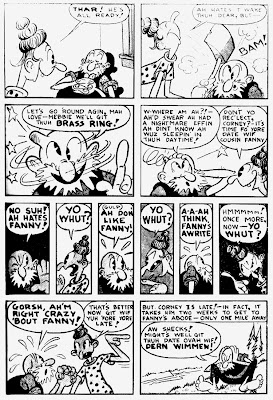 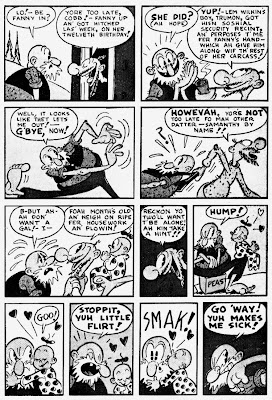 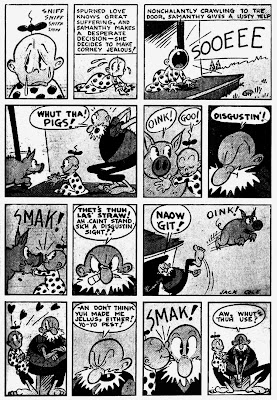 Lest you think this is just too danged weird, a mainstream US television show watched by millions built an episode around a similar concept. "The Darling Baby" from The Andy Griffith Show has the 10-year old Opie Taylor (Ron Howard) narrowly escaping wedlock to a 3-month old baby. It's just them mountain folks' ways, I reckon! You can read a second HOME IN THE OZARKS story, in full color, by Cole from one year later, here.

Cole's cartoon work here is loose and fast, and delightful. The baby reminds me of Swee'Pea, from  Segar's Popeye, another prime influence on Jack Cole.

Cole, by all accounts, was a funny guy. In an Alter Ego interview from a few years ago, Alex Kotzky, a terrific cartoonist who worked with Cole on Plastic Man and the True Crime comics, provides a fascinating insight into Cole's demeanor: "You know who Willard Scott is? Physically, Jack could have been his twin brother. And he was the type of jokester that  Willard Scott is."

Enchanted Images, the creator of the informative documentary, has brought the Landon course back into print, and you can buy it from them for $24.95 at their website.