Machines of Death and Betrayal: A Nightmarish Comic Book World of Lies and No Redemption

This clever and disturbing story reads like an inky black film noir story turned inside out.

Or, perhaps more accurately, like a particularly morbid Alfred Hitchcock film. This is a story that David Mamet, the modern-day Hitchcock, could have written and directed. Cole devilishly plays with our expectations. Inserted into a comic book series filled with supernatural horror stories, and appearing on the stands among numerous other comic books that laid out straight horror stories, Cole tricks us into believing that we are reading a supernatural, back-from-the-death horror story.

Starting with Cole’s memorable cover, in which a man grotesquely laughs while strapped into an electric chair, we are both drawn in and duped. 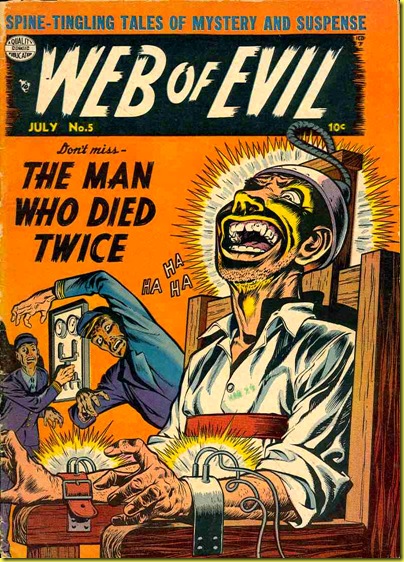 Cole’s story, which as the lead spot in this issue, begins with a ludicrous – but nonetheless compelling -- splash page that in no way reflects the reality of the narrative, as the condemned prisoner, Les Paley, appears to be springing from the electric chair, revitalized by the surges of energy through his body. In the narrative (also false), Paley appears to be executed without incident – certainly there is no bounding up from the chair. Thus, before the plot begins, Cole has primed us for a set of events that actually never transpire. By the time we realize this, he has pulled off the virtuoso feat of delivering something even more engrossing than a man openly defying execution. 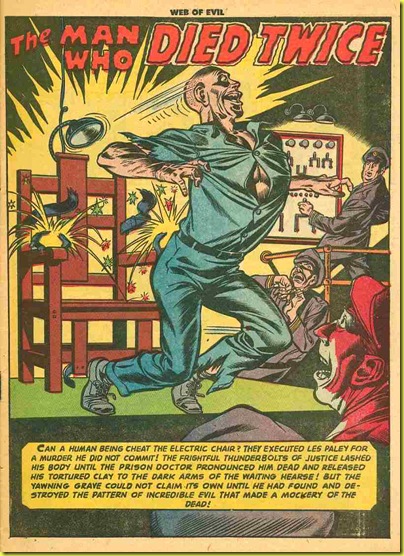 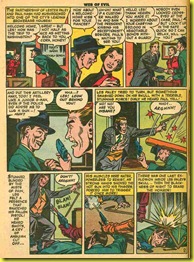 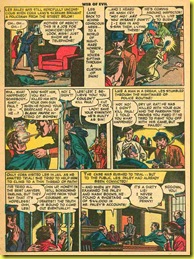 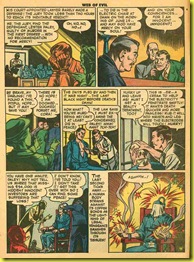 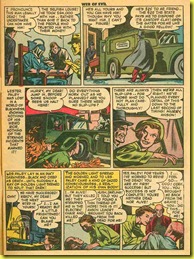 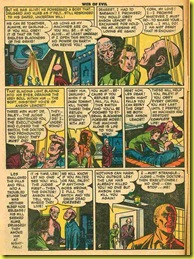 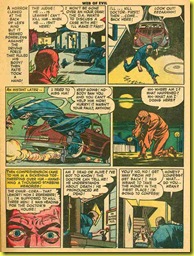 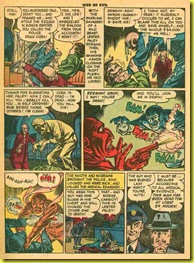 Cole’s writing is particularly vivid in this story, as in the narration for the scene of Paley’s execution:

“A human body strains as the lightning of legal vengeance smashes through its tissues.”

Cole is not merely being prosaic; his intensity helps to convince us that an execution is actually happening. 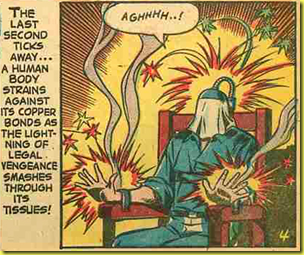 In literature and cinema, we find the concept of the unreliable narrator. That is, the person telling the story is lying, for their own purposes. In Alfred Hitchcock’s 1950 film, STAGE FRIGHT (which Cole may well have seen), the story famously begins with a long flashback sequence in which a woman appears to have committed murder, and a man appears to be seduced into covering up the killing to protect her. It is not until the final minutes of the film that we learn the shocking truth that what we thought was the story turns out to be a deception aimed at both characters within the story, and the viewers. Here, in “The Man Who Died Twice,” Jack Cole reaches new heights of sophistication by seamlessly integrating an unreliable narrator into a linear graphic narrative.

It is not until the last two pages of the 9-page story that we learn the execution was staged to fool both the people watching AND the man being executed. Up until this point, the story plays like a supernatural horror story. Part of the genius of this story lies in that Cole’s ability to convince us a man could actually believe he had died and came back to life. 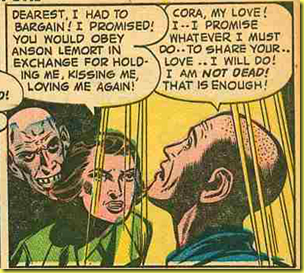 After Paley’s “resurrection,” rays of heavenly light (also present in his trail scene) stream down on him, suggesting both an unearthly presence, and Paley’s own interior state of mind. His head, shorn for the metal helmet of the electric chair, makes him look saintly, as one who has renounced the pleasures of the physical world.

The rays come from the funeral director LeMort’s machine which supposedly brought Paley back from the dead and is keeping him alive. Thus, LeMort assumes godlike proportions, with the power to bestow life and to take it away with the flip of a switch. Of course, the resurrection machine is phoney, one of the rare instances in Jack Cole’s work when a crazy invention is a deception instead of the real thing – a sure sign that Cole was undergoing a personal transition tinged with disillusionment.

But Paley’s spiritual redemption is short-lived. “You… you did this for me?” Paley says to Cora, the woman who professes to love him. After a scant few panels, Cora has convinced Paley he must do as the funeral director, Le Mort (translates as “The Dead”) bids him: murder three people. 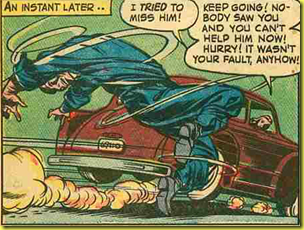 As he stumbles out to perform his terrible task, fate intervenes, and Paley runs into the path of a speeding car, which hits him and then speeds away (wheels within wheels: we get a momentary glimpse of the drama of the people in the car as the driver is commanded by a passenger to leave the accident since no one saw… another incident of a person being victimized and torn down by their involvement with someone less moral).

After being hit, in a spectacular panel in which his body is contorted like Plastic Man’s, Paley wonders if he is dead or alive. He rushes to the home of the doctor he was planning to kill minutes earlier, but now to ask for help. In an instant, the situation has changed, and just as quickly, it evolves again into something else when the doctor cowers at the sight of Paley and confesses his involvement in faking Paley’s death. The story is staggering and whirling like Paley’s body when it was grazed by the hit-and-run driver. It is a tribute to Cole’s mastery as a graphic storyteller that we are never lost in this convoluted narrative.

Now Paley knows the truth: he is alive, and his beloved Cora is only using him. Driven by cold rage, he exacts his revenge despite being shot nine times by LeMort. 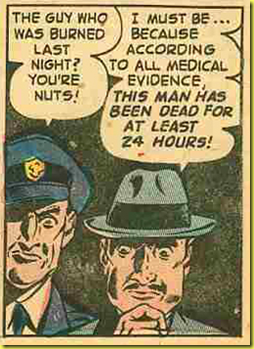 The story, which began as a horror story, seemingly ends as one when the authorities in the last panel are stunned to realize that somehow Paley managed to kill Cora and Le Mort 24 hours after he was executed. While some of the characters in the story continue to be fooled by the brilliant deception, we the reader have come through the mirror, and know the truth. This is a story on a spit; it turns and turns on itself until finally the depths the characters sink to are far more disturbing than hoary supernatural phenomena.

Cole did not call this “The Man Who Came Back From The Dead.” Even though we were fooled, Cole gave us the ending from the start with the fatalistic noir title: “The Man Who Died Twice.” The title works on several levels, since Paley loses all faith and hope when he learns of his betrayal by the woman he loves and his spirit does truly die.

Was this a prefiguring of events that were, or would transpire in Cole’s life? It has been speculated, but never established, that infidelity may have been part of Cole’s reason for taking his own life. © 2009 Paul Tumey