These are presented in the order of publication. This set of 10 are from National Comics #40-50. There was no Windy Breeze published in National Comics #43, although Cole was more than usually present in that issue with the cover and lead feature, the first BARKER story (which we will present in this blog very soon!), For the previous 20 Windy Breeze pages, see my earlier postings here.

Note that, as in the earlier postings, I have touched up some of the pages and added publication information on each page.

I am indebted to Ger Apeldoorn’s great blog, The Fabuleous Fifties, for a couple of the scans below. Notes on the individual episodes follow.

National Comics #40 (March, 1944)
In their great book, Jack Cole and Plastic Man: Forms Stretched to Their Limits, Art Speigelman and Chip Kidd refer to “the idea-per-minute vaudeville zaniness of Olsen and John’s Hellzapoppin…” This episode is a good example of Cole’s Vaudeville like theatrical staging. His characters often “acted” for the audience, dropping outrageous puns and striking humorous poses, just like comedians in the Vaudeville and early film comedies did. 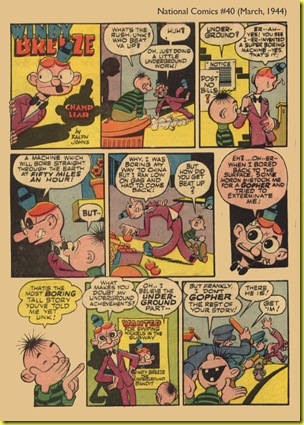 National Comics #41 (April,1944)
This scan comes from my own collection, and is part of what I call the Great Tallahassee Golden Age Score, in which I managed to acquire two large cartons of random pages of classic Golden Age comic books, including some nice Jack Cole material. For the whole story on that collector’s dream find, see this posting. In panel 3, Windy talks directly the audience, another Vaudeville, broadly comic touch. 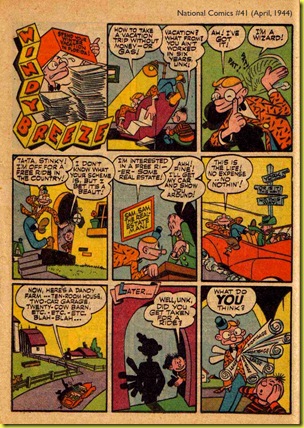 National Comics #42 (May, 1944)
A bizarrely violent episode with great cartooning. I love the way Cole’s figures in the mid-forties had become refined and angular. Note also the amazingly good lettering (which Cole did himself in these 1-pagers), especially in panel 5. His lettering enhances the “actors” delivery of the lines. Look at how the rising and lowering of the h’s in “Ohhhhhh!” suggests the wavering of a prolonged exclamation. It’s a myriad of touches like this that makes Cole’s comics a world unto their own, and fun to read. 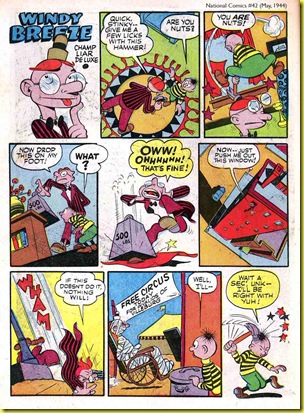 National Comics #44 (June, 1944)
Lots of wonderful little touches here. The scalloped edges of the middle tier. The dynamic integration of the “zoom” sound effect in panel 5, the labels for the 20th floor and the banana peel, which somehow add to the zany humor. 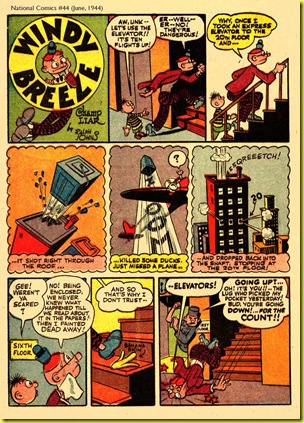 National Comics #45 (July, 1944)
One of the very best of all of Cole’s one-pagers. Beautiful design, great pacing, lovely cartooning. Note the scalloped edged panels again for the imaginary flashbacks. 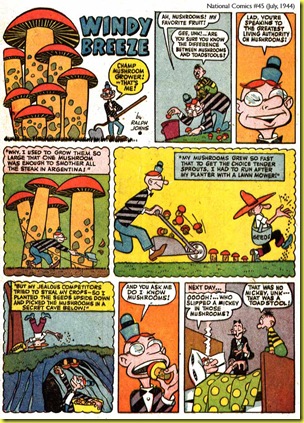 National Comics #46 (August, 1944)
Cole is hitting some kind of peak here with another breathtaking page. The fanciful rowboat reminds me of George Herriman’s Krazy Kat. Look how Cole breaks up the three tiers with tall and shot panels. I love how Windy’s speech balloon in the final panel dovetails into the space made by the 3 panels around it. Outstanding layout. 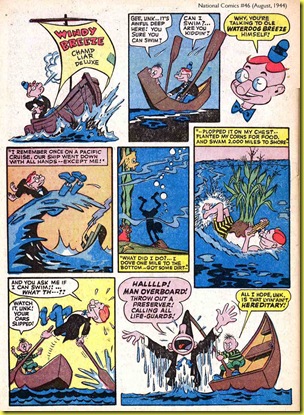 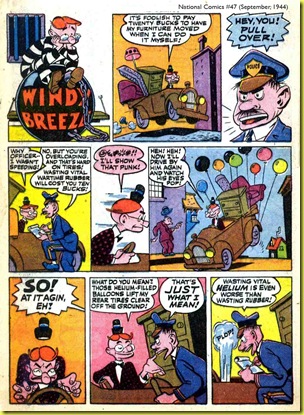 National Comics #48 (October, 1944)
Occasionally luck breaks in Windy’s favor, which keeps the strip interesting. The idea of propelling a motorboat with furious ear-wiggling is funny. Cole was such a good writer that he doesn’t even need to illustrate this to make it funny. Love panel seven, where Cole really suggests a strong wind with the poses and displaced clothing. 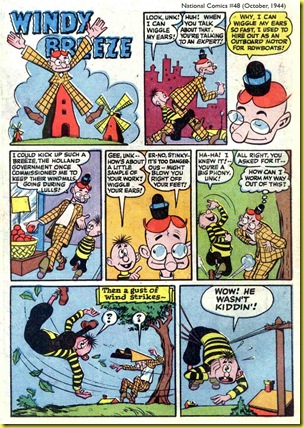 National Comics #49 (November, 1944)
This episode is funny, but there is a slight edge of darkness, especially in the great opening panel. 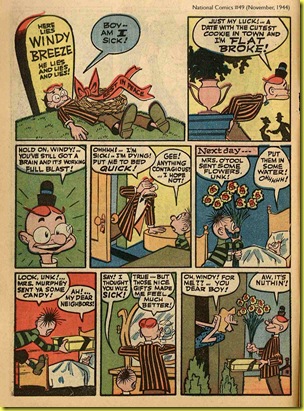 National Comics #50 (December, 1944)
Brilliant word play. Cole was a true master. If Samuel Beckett wrote comics in the 1940’s they might read like this. Note how Cole has simplified the images to match the reduced verbiage. And note also how his expert lettering carries the entire concept forward, as it subtly increases in size. 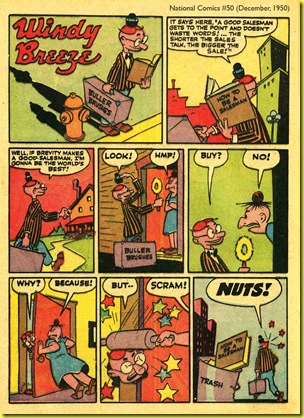