I Was The Monster They Couldn’t Kill – So I Had To: Jack Cole’s Final Comic Book Story 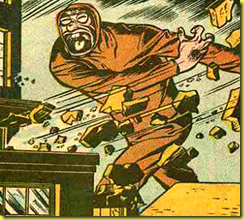 Jack Cole’s dark and disturbing last published comic book story haunts me. I first read it about 6 months ago, and have read it about a dozen times since. I cannot escape the growing sense that Cole was sending out a personal message in this story: a comment on his 16 year career in comic books, and perhaps a bitter statement about the way the industry had changed. I think Cole drew back the curtain and exposed his own inner psyche in this story. Knowing that he would take his own life in despair just a few years later, this story haunts me.

It’s my own theory that Jack Cole wrote at least 8 of the 16 stories he penciled that appeared in Web of Evil #1-11 (I haven’t seen the first story he did, in Web #1). It seems to me that these stories are all better written and revolve around a character’s psychological breakdown instead of an unexplained supernatural event. A more complete explanation of this theory is available in an earlier posting, here. 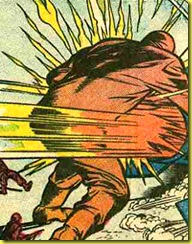 In “The Monster They Couldn’t Kill,” Cole creates the character of a scientist who has a serious lapse in judgment and makes himself the test subject of an experiment involving atomic energy. Cole begins the story brilliantly AFTER the experiment, our first indication that this is – either deliberately or unconsciously – a story reflecting BACK on his career in comics. It seems certain that Cole created this story knowing full well it would be his last, since it was his decision to go work for Hugh Hefner at PLAYBOY.

Even though he was dismissive of his comic book work, there can be no doubt for anyone that has read Jack Cole’s stories that he poured his heart and soul into these stories, and realized on some level that they represented an enormous effort on his part. This was a guy that clearly LOVED comics. “The Monster They Couldn’t Kill,” then, is a window into Cole’s feelings as he closed this chapter of his life. 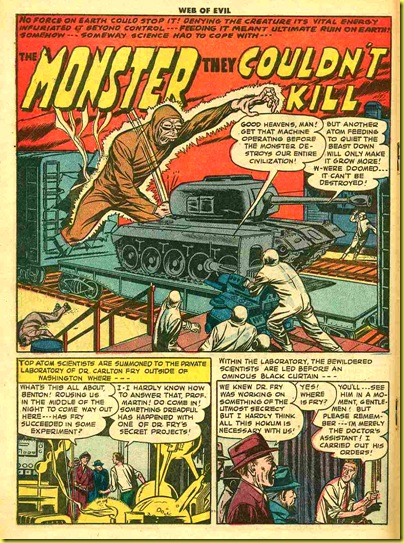 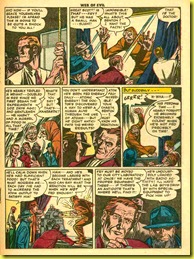 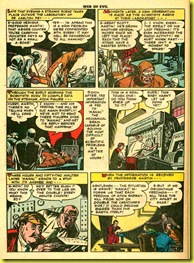 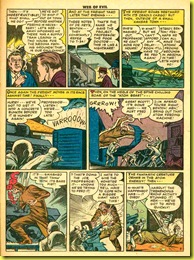 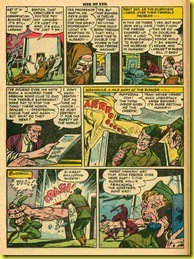 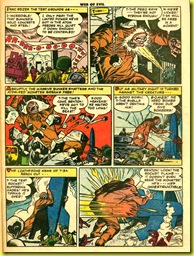 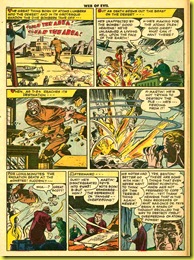 The scientist-monster has no voice in this story. Not until the end do we even know for sure that anything of his mind and humanity remain.

Once again, we have Cole’s favorite theme of crazy inventions, which he used over and over in his graphic stories, starting with some of his earliest work on the DICKIE DEAN, BOY INVENTOR stories (1940).

In this story, the focus is not on the invention at all, but the terrible consequence it has had on it’s inventor, and the people around him. We know that Cole himself was an inventor, so if we switch out the scientist with Cole in this scenario, a chilling personal statement about how he may have regarded himself comes into focus. 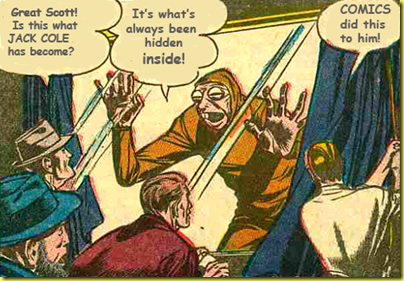 It’s almost as if Cole is revealing some deep inner part of himself. A grim-faced scientist pulls aside a curtain on page two and we see what this great inventor has become: a giant 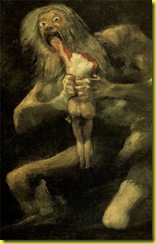 idiot, barely recognizable as a human. He wears goggles with slits in them, presumably eye protection from when he irradiated himself.

The goggles and his deformed face and body give him a preternatural look, like something out of a Goya painting. I was struck by the similarity between the post-atomic Dr. Fry and Jack Kirby’s Mole Man villain from his FANTASTIC FOUR stories (which was derived from his 1950’s monster stories): 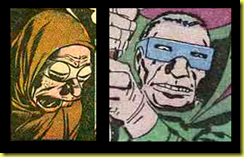 Cole was a tall man, with thin fingers, and it seems to me he put something of himself into both Plastic Man and Dr. Fry.

The psychological overtones are rampant in this story. I also wonder if Cole was thinking about the comic industry, which had grown so rapidly and which had seemingly morphed 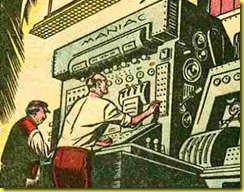 into a world where he was no longer welcome. The industry had grown at a maniac pace. It’s no subtle clue that Cole names the super-computer in the story “Maniac.”

Dr. Fry is a sort of post-atomic age version of Plastic Man, in that his body is deformed by a brand new technology. Going all the way back to Jack Cole’s first adventure story, Little Dynamite, so many of Jack Cole’s stories are about the power – and chaos - that is unleashed when the human body is stretched, deformed, pulled, stunted, or gigantized.

Like Plastic Man, Dr. Fry is a hero, but for different reasons. Dr. Fry’s growth is out of control. Maniac informs us that he will eventually be larger than the earth. In short order, he’s too large for humans to control. He bursts out of a railroad 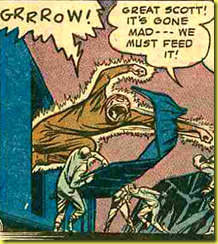 But none of this destruction is mindless, as it turns out. Dr. Fry is well aware that he has become the monster they can’t kill… therefore the only solution left in this desperate situation is… suicide. In the last panel of the last story Jack Cole published, the “monster” is praised for taking his own life and sparing those around him. Suicide as heroism.

Jack Cole took his own life on August 13, 1958, just about four years after he wrote and drew “The Monster They Couldn’t Kill.”  He wrote two suicide notes, bought a hand gun, and drove to a road outside of town and shot himself in the head. Sadly, two children on bikes found him, still alive. He died later that day in a hospital.

It has never been clear why this enormously talented and powerful creator ended his life so early, in the prime of his life. His last comic book story, perhaps, holds a clue.