Aside from his Boy’s Life cartoons, Jack Cole’s earliest known published work appears in the pages of the comic books published in 1936-39 by a group of publishers known today as Centaur.
In 1936, shortly after moving to New York from his hometown of New Castle, Pennsylvania, Jack Cole landed a job with the Harry “A” Chesler shop,  the first-ever art studio set up to supply the newly born comic books with original stories (many of the first comic books were reprints of newspaper comics).
Cole started out at the shop as an assistant, providing inking, backgrounds, and the occasional one-pager, such as this inspired bit of lunacy from the April 1938 issue of Funny Picture Stories (Vol. 2 #7): 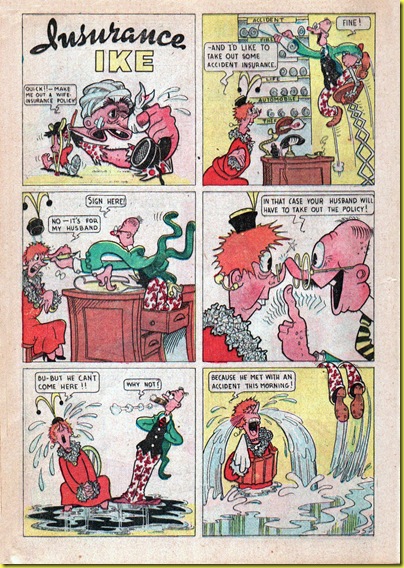 I love how INSURANCE IKE dives behind the last panel. Also note that the flood of tears would later be used several times in PLASTIC MAN stories, most notably, the celebrated Sadly Sadly story, created over a decade later.
Jack Cole’s first work in comics embraced what is today known as the ‘screwball’ comic. Exemplars of the screwball strip are SMOKEY STOVER and the great comics of Milt Gross.
Jack Cole’s wholehearted investment in developing a screwball style is especially present in these black and white scans from Funny Pages Vol 3 #10 (Dec. 1939). Note the presence of Cole’s signature in the first page, a rare instance in which Cole acknowledges Christmas in his work: 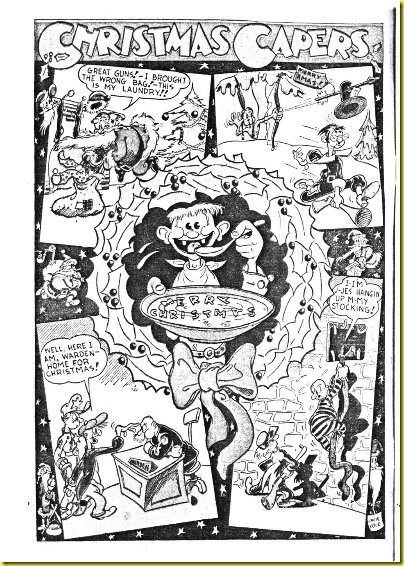 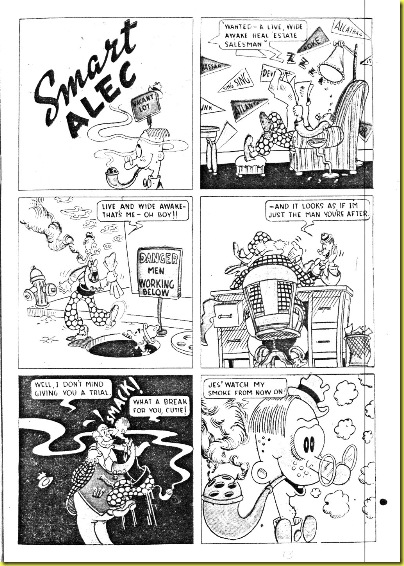 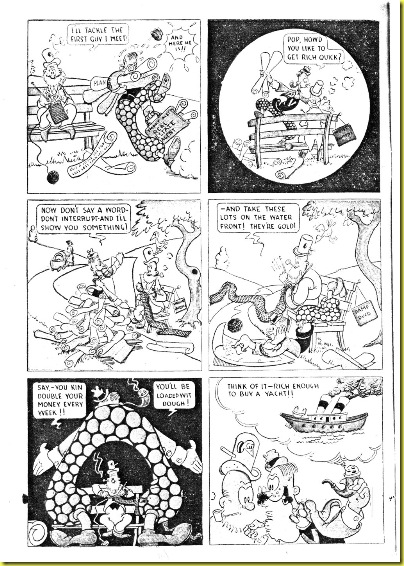 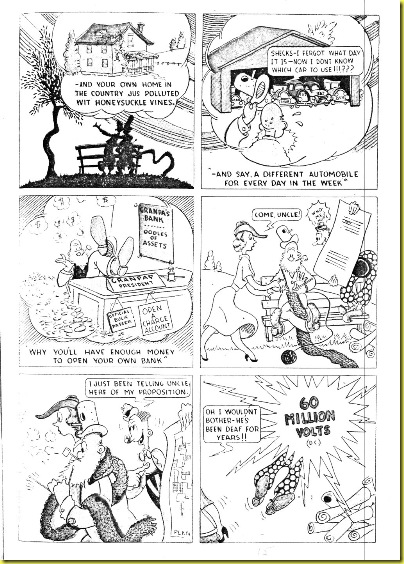 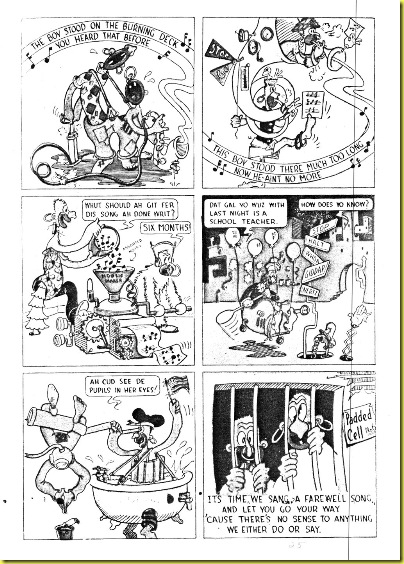 During this time, Jack Cole actually  worked in a room with other artists and writers, including Bob Wood, Martin Filchock, Fred Guardineer, and Charles Biro (of CRIME NEVER PAYS fame). Cole picked up tips and tricks from these artists, and no doubt there was a great deal of cross-pollination that occurred between the hard-working men.
I think Cole, to some extent, may have been influenced by fellow Chesler studio artist Fred Schwab. Take a look at this page, also from Funny Picture Stories Vol. 2 #7 by Fred Schwab (initialed “F.S.” in the 5th panel): 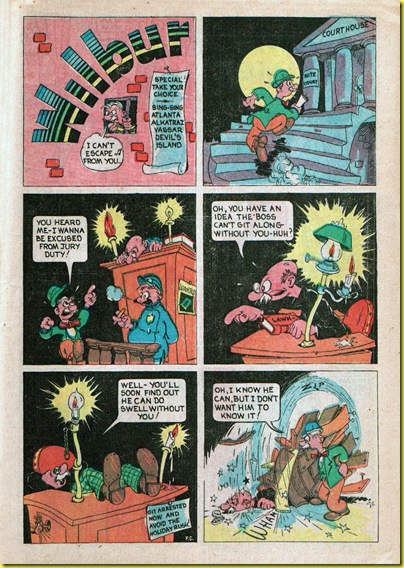 This page contains several qualities that became part of Jack Cole’s style: the breakneck pacing, the full moon framing device, the integration of sound effects into motion lines, and the use of bold patterns. One almost wonders if Cole did the backgrounds and fills on this page.
Here’s another page from the same issue of Funny Picture Stories in which one has to look closely to tell whether this is Schwab or Cole: 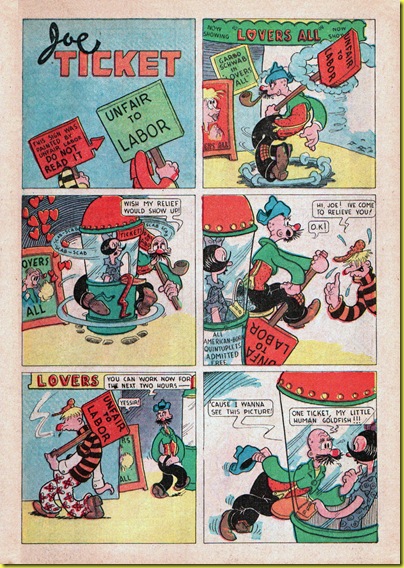 This is indeed by Jack Cole. Note the very same pattern used on both INSURANCE IKE’s pants and those of the character shown in panel 5, above.  In panel two Cole inserts a rare name-check (Garbo Schwab) to the Chesler artist he must have been most attuned with. I believe that Cole and Schwab may have collaborated on some stories in the 1937-39 Centaur comics.
In this 1938 page, Cole’s bodies are already impossibly and comically distorted, far beyond anything Schwab (or any other Chesler studio artist) attempted. Check out JOE TICKET’s twisted rubbery legs in the last panel – how many times do we see PLASTIC MAN’s body do the same thing?
The Centaur books were a great training ground for a beginning comic book creator. The stories were all pretty short, ranging from 1-5 pages. There was plenty of of room for different styles and different kinds of stories. You can see all the early Centaur artists experimenting and quickly dialing in on what worked best for them.
Cole quickly developed an appealing style and offbeat sense of humor. You can see a sampling of his Centaur pages in my earlier posting, here. As time went on, Cole won more and more of a starring position in the Centaur books, with longer stories in the lead position, and even covers, such as this honey from March, 1939: 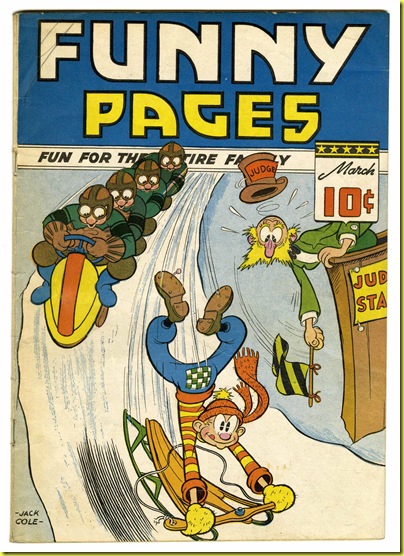 Here’s another beautiful gem of a cover that has just surfaced, thanks to the great folks at The Digital Comic Museum: 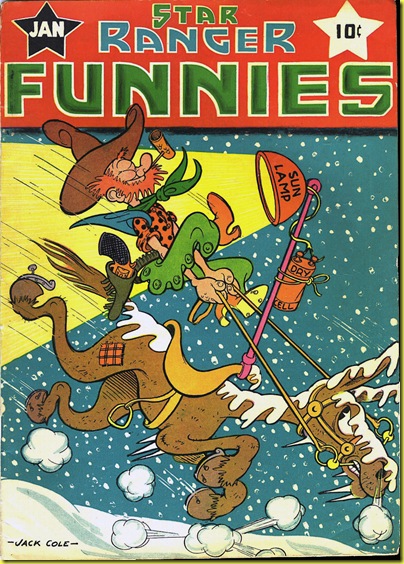 This cover is from the Vol. 2 #1 issue  of Star Ranger Funnies (Jan. 1939). By this time, Cole had arrived as a bigfoot cartoonist. The gag is bizarre (which means interesting)  and his execution is supremely confident. Also we see here the early appearance of some devices Cole would use throughout his 16-year career in comics. The lamp beam is something Cole would employ on many covers and splash pages. The polka dot snowstorm is actually a pattern, which Cole used in a great deal of his work to add visual interest.
Another sign that, by 1939, Jack Cole had streaked like a meteor into higher and higher levels of success is seen when we turn the cover of this issue and this early four-page masterpiece of weirdness which Cole signed twice, once as ‘Zeke Cole’ and once with his own name: 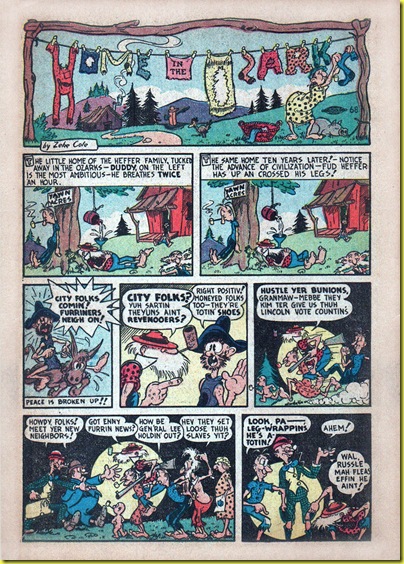 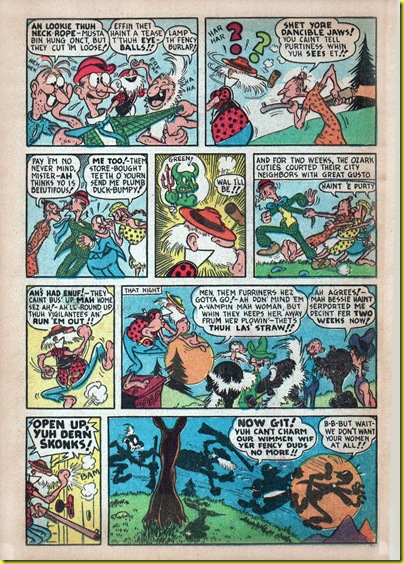 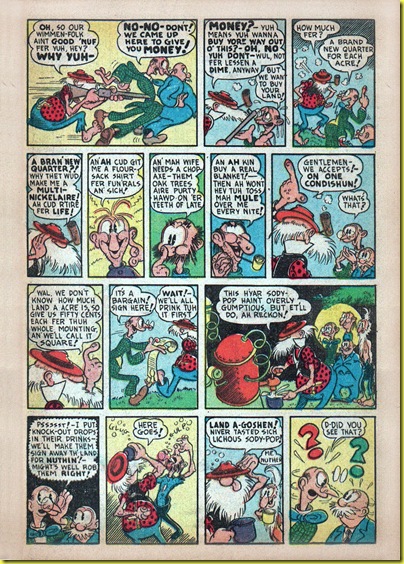 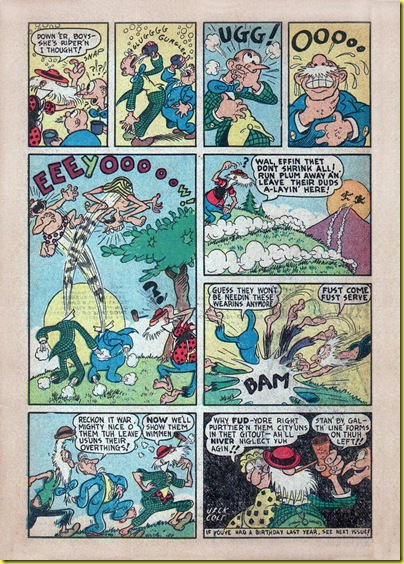 Cole worked with funny hillbilly characters a lot in his early years. For example, he had a series called THE HIGRASS TWINS that appeared in 1940 issues of Target Comics (Novelty Press). Ron Goulart’s great biography, FOCUS ON JACK COLE, reprints an earlier “Home In The Ozarks” story, suggesting this was one of Cole’s first series.
This story is simply wonderful. There is a density of gags presented within a satirical framework that prefigures the Kurtzman/Elder MAD stories of more than a decade later.
It’s interesting how much these pages resemble Basil Wolverton’s great comedy series, POWERHOUSE PEPPER. I doubt there was any influence in either direction. Both creators simply settled on a winning formula and set of visual techniques.
Cole, of course, quickly moved on past this style as he took on serious crime stories and super-heroes. However, in his best creation, PLASTIC MAN, Jack Cole kept a generous helping of the slapstick gag humor that he mastered in his early years at Centaur.
Posted by Paul C.Tumey
Email ThisBlogThis!Share to TwitterShare to FacebookShare to Pinterest