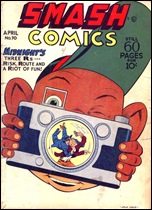 News!
In case you missed it, I recently received a great comment from Mike Millard, son of the writer Joe Millard. Joe Millard worked with Jack Cole on THE BARKER and is thought to have penned some PLASTIC MAN stories, as well. See my earlier article on the Joe Millard/Jack Cole connection here.

I wish I could add something to the debate over whether my dad, Joe Millard, was really the writer behind the first of "The Barker" series. I can't. It would certainly have been right up his alley, though since one of his first jobs after cowboying on his father's Minnesota ranch was as advance man for a stunt flying team who hop-scotched across the small town mid-west. I seriously doubt he ever did any Dick Tracy work--although a Pennsylvania newspaper story recounting our mid-forties ownership of some historical property in Quakertown, made that assertion. Dad loved showmanship and the PT Barnums of the world. He started in pulps, moved to comics and then magazines--and the books, sort of 'just happened'. Historical non-fiction was his enduring passion.
Mike Millard
Ft Lauderdale

Some time back, I also received this very nice note from Joshua Cole, nephew of Jack Cole:

Dear Paul,
I recently stumbled across your blog about my late, great uncle Jack Cole, and wanted to thank you for the attention which you've devoted to his art.
Just out of curiosity: how did you become interested in his work?
Thanks again.
Cheers.
Joshua Cole

I did respond but Joshua declined on writing back. In any case, it’s a true honor to hear from him and Mike Millard. Thanks, guys! And now, on with the show!

This story, set in a classroom, is a lesson in the distinctive style that Jack Cole had developed by 1947, after about 10 years of working in the comic book form.

An artist’s “style” is generally thought to be the collection of formal elements present in the artist’s work that makes it stand out as something unique. The Wikipedia discussion of style in art, interestingly, uses the painter Roy Lichtenstein’s comic book dots as an example of style. This is interesting because I think that comic book stories are among the most heavily stylized art forms.

Part of Jack Cole’s value as a artist, even today, is his inspired invention and refinement of numerous formal elements that help make up the very language of the form.

“Murder Leads to the Classroom,” while a fairly lackluster story in terms of plot and character (one wonders if Cole had editorial direction to make the Midnight stories less crazy than his Plastic Man farragoes?), is filled to the brim with brilliant graphic inventions that are a part of the distinctive Jack Cole style. These include:

There are many more recurring stylistic elements in Jack Cole’s work (see my earlier article on Cole-isms), but these are some of the most obvious items.

One might also note that Cole’s stories often contain graphic depictions of cruelty and violence (a brutal stabbing in this particular story) and sexy women as main characters (the fetching schoolteacher in this story) or as eye-candy in the background (page 2, panel 1).

Cole’s stories are also frequently are filled with manic action as his characters sprint, speed, and zoom through space (his roaring cars usually had at least two wheels off the ground). A peak example is this Midnight story from November, 1942.

One last note on this story: In the opening splash, a kid has a comic book hidden in a text book. Later on, a student is reading a book called “The Bloody Knife” (page 7). These elements show that Cole was not unaware of of the possible influence his adult-oriented comics may have had on the younger generation. 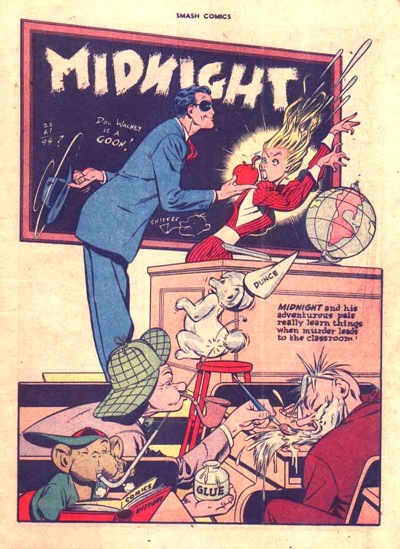 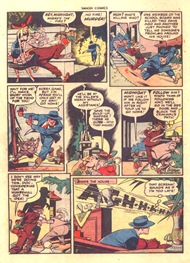 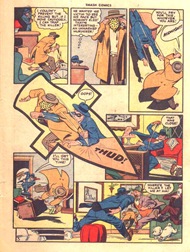 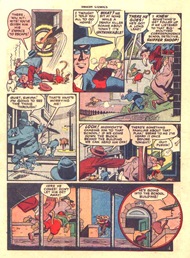 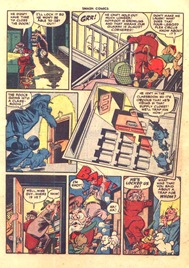 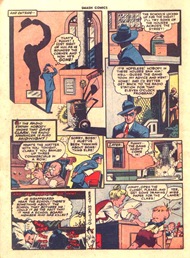 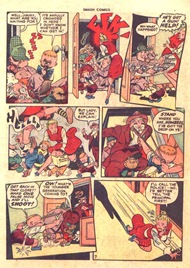 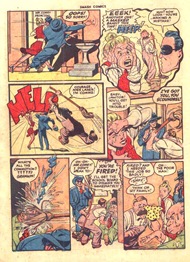 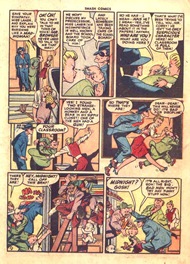 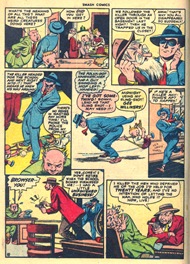 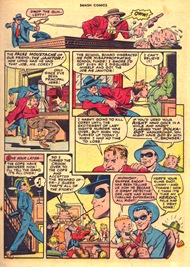