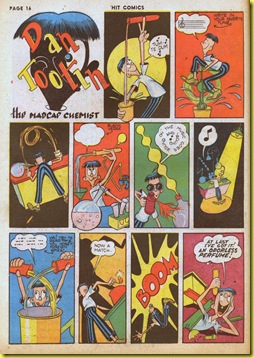 A liquid that can make a mountain out of a mole hill. A chemist that can jump into a microscope and battle germs. A spaceship made from a giant loaf of bread. These are just a few of the astonishing imaginative leaps Jack Cole took in his unknown series of one-pagers featuring DAN TOOTIN – THE MADCAP CHEMIST.

Of the five one-page series Jack Cole wrote and drew in the 1940’s, DAN TOOTIN ( a play on the phrase “Darn Tootin” which means “you’re right.”) comes the closest to matching the brilliance of his most famous creation, PLASTIC MAN.

DAN TOOTIN is a pure Jack Cole creation. Cole inherited some of the one-pager series (such as WINDY BREEZE and SLAP HAPPY PAPPY) and was forced to work within the constraints of another artist’s basic premise. With DAN TOOTIN, Cole let loose and the result is a staggering stream of surreal bon bons.

Brilliant inventors regularly appear in Cole’s work from the early series DICKIE DEAN, BOY HOOD INVENTOR, to Doc Wackey in Midnight, to various characters in PLASTIC MAN, to “The Monster They Couldn’t Kill,” his very last comic book story. In DAN TOOTIN, Jack Cole immerses himself in the world of a magical chemist.

The series had its own visual flavor, often with sophisticated coloring and playful typography.

The series appeared in most issues of Hit Comics 9-46, as well as a few other places. Here is a selection of this remarkable series, presented in chronological order:

Hit Comics #9 (March 1941)
The first appearance in the series is already invested with great originality and creativity. Cole adds a small 5th tier to depict a hilarious Jeckyl and Hyde transformation. This page has the same energy of the first PLASTIC MAN story. 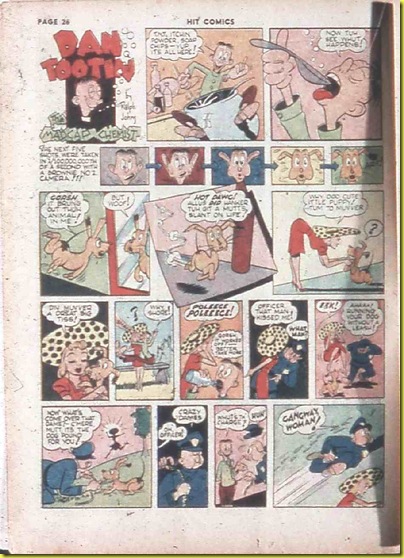 Hit Comics #10 (April, 1941)
Most of the examples of this series I have are from low-quality micofiche scans. However, given the rarity of these brilliant pages, it seems worthwhile to publish them. 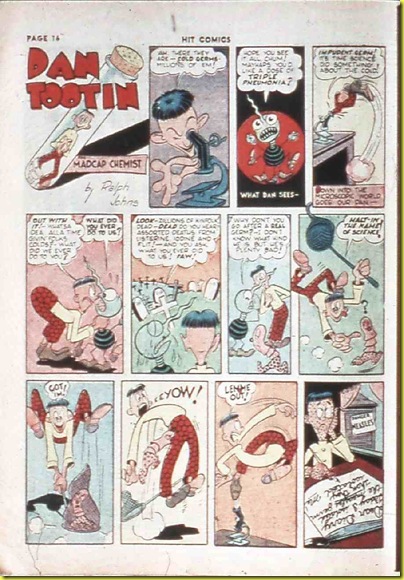 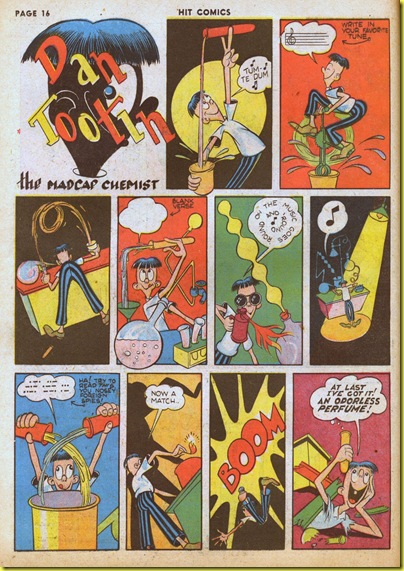 Hit Comics #13 (July, 1941)
This page is fabulously lyrical with the conceit of escape into a giant loaf of bread. I’m reminded of Roald Dahl’s James and the Giant Peach (which also resembles the amazing Cole story from Police Comics #10 in which a a criminal gang roams the world in a giant 8-ball).  “A world of your own made of bread. Hop on and sail away from this wicked earth.” At its best, Cole’s work operates on multiple levels of comedy and tragedy all at once. 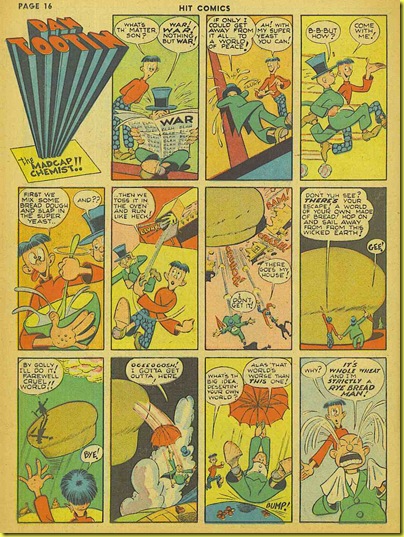 Check out that accordion-fold smash in panel 7, and the foreshortned foot in the last panel. Cole often drew the bottoms of shoes. 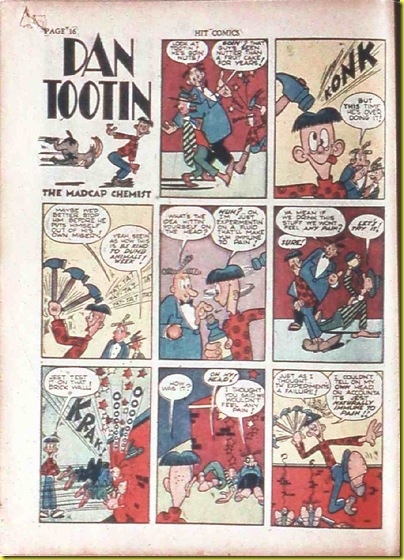 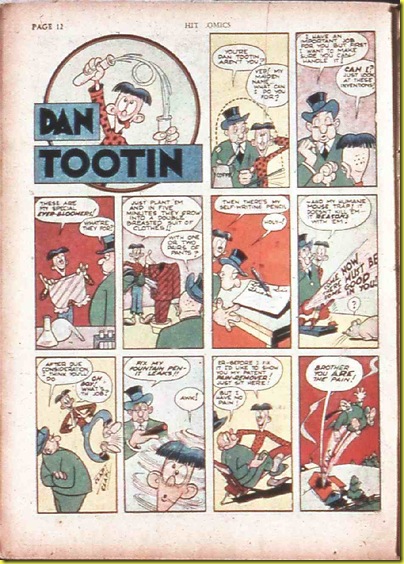 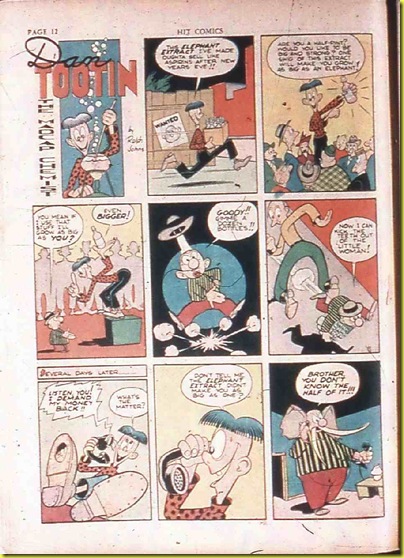 Cole’s writing, always good, is particularly brilliant in this page. Not only does he use wild slang and outrageous puns, but he makes it rhyme, rivaling Dr. Seuss and Edward Lear. Cole is was most likely influenced by the greatest newspaper screwball strip of all time, SMOKEY STOVER (see my article on this connection here). 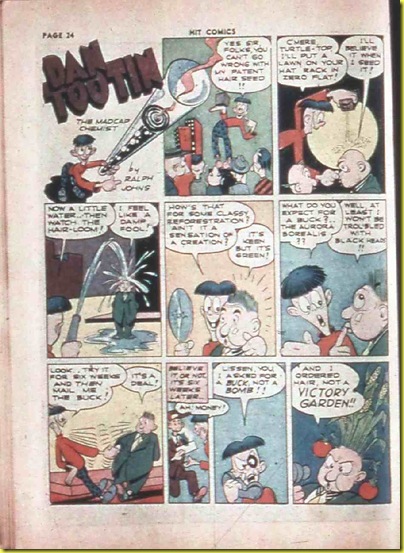 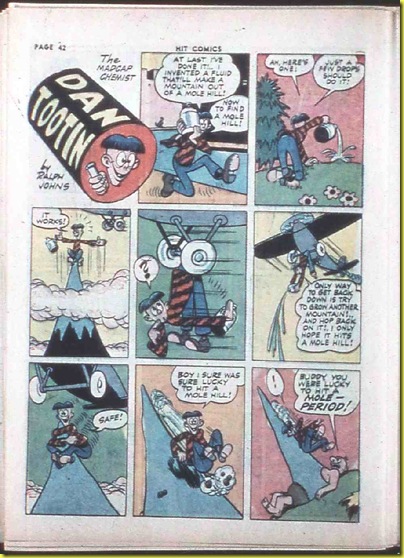 Hit Comics #27 (April 1943)
A rare early use in comics of the multiple-tailed speech balloon, a device that Little Lulu master John Stanley would use to great effect in his work. 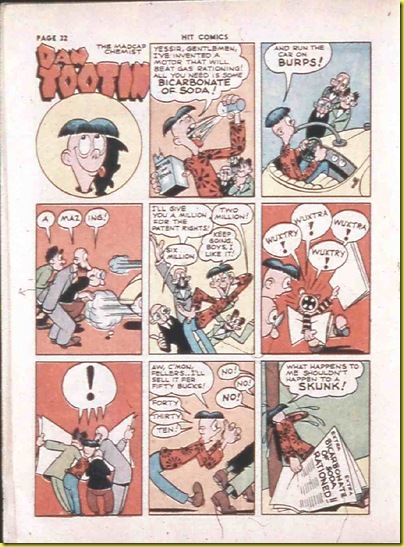 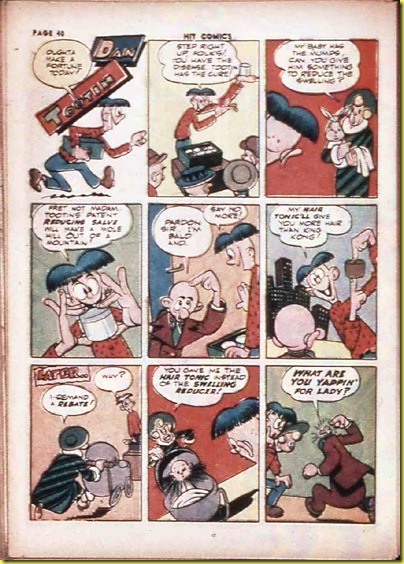 Hit Comics #30 (Nov 1943)
The impossibly buck-toothed weeper is a patented Cole caricature that shows up in some of his PLASTIC MAN stories. 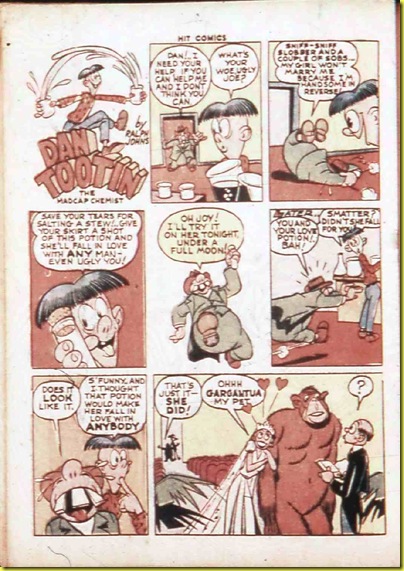 Hit Comics #34 (Winter 1944)
One of numerous references to suicide that appear in Jack Cole’s comics. This page has an edge to it. Cole’s style has evolved, and so has the tone. 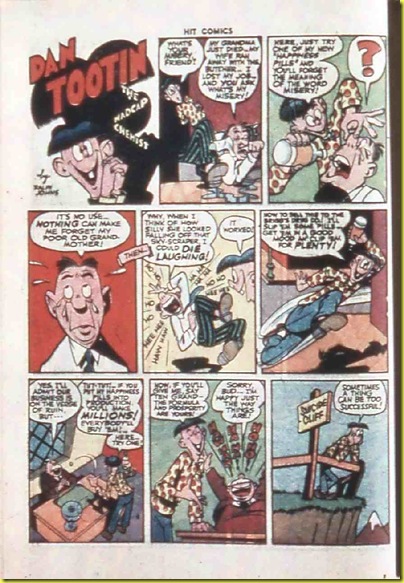 Hit Comics #37 (Autumn 1945)
This story, in which a character humorously comments on his own actions as he performs them is very Kurtzman-like. 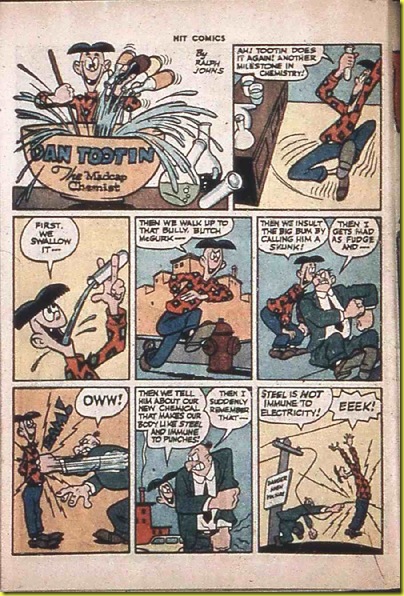 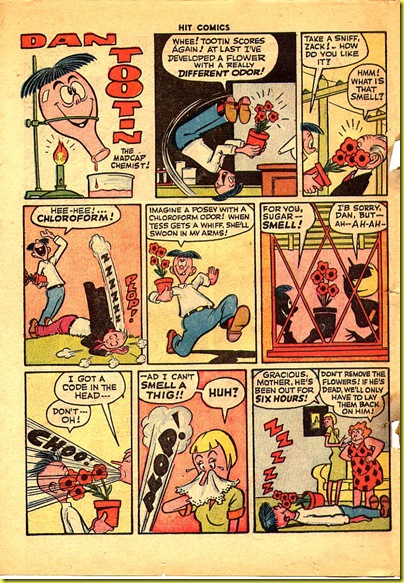 Hit Comics #46 (May 1947)
The last Dan Tootin to appear in Hit Comics is a beauty in both layout and writing. Cole really sunk his, um, TEETH into this page. 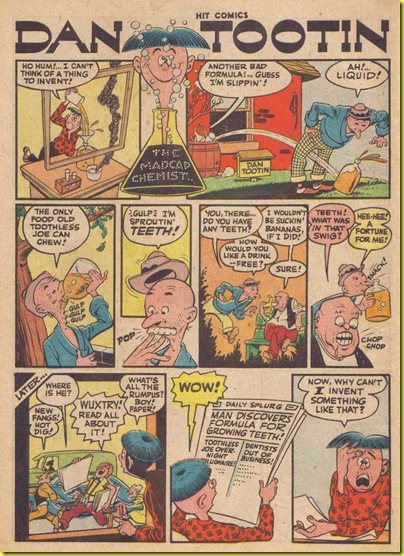 All Humor #15 (August 1949)
There may be others, but this is the only non-Hit Comics example of the series I have found. This story is a companion piece the Cole’s amazing PLASTIC MAN dream story from Police Comics #89 (April 1949) 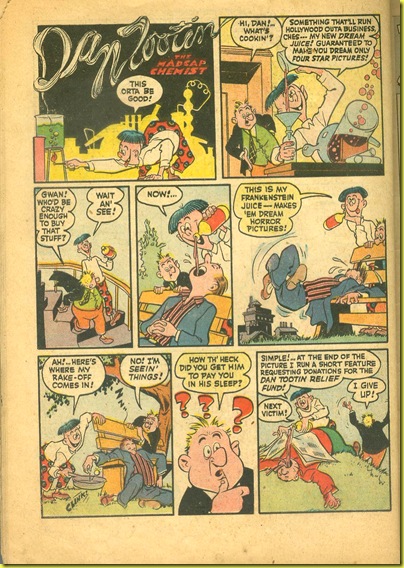