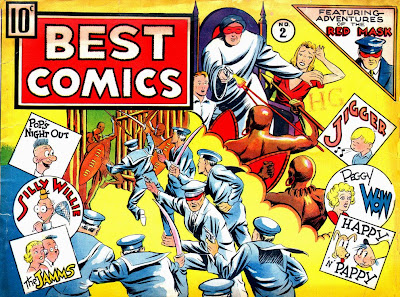 It was one of those hot summer night phone conversations.

You know the kind. When the phone sticks to your ear with sweat, but you are your buddy are having such a great talk, you don't even notice.

Inevitably, my conversation with Frank Young turned to comics, and he casually mentioned, "Oh, by the way, I've found a new Jack Cole cover that probably not many people know about, if any." Through the magic of the Internet, I was looking at the cover of Best Comics #2 (December 1939, Nedor/Better/Standard) on my PC in minutes, and wow, did it blow me away!

What a great, iconic and yet unusual Golden Age cover! I asked Frank to write a few thoughts about it in a "guest posting" for this blog.

Frank Young is the former editor of The Comics Journal, and an accomplished comic book creator himself. Check out the blog on his and David Lasky's new graphic novel, Carter Family Comics - Don't Forget This Song, coming out from Abrams, here. And, of course, Frank is the creator and author of one of the best comic blogs on the Web, Stanley Stories, exploring the work of comics master John Stanley, and the inspiration for this here blog. Here's Frank's notes:

Published the same month as the debut issue of Silver Streak Comics [which starred Jack Cole's anti-hero THE CLAW], Best Comics was an early format experiment for the comic-book industry.

This comic book was printed sideways, or, to use modern computer-printer lingo, in the landscape format. According to the Overstreet Comic Book Price Guide, this title was also larger than the usual funnybook format, perhaps like Fiction House's Jumbo Comics. (The Overstreet Guide contains so much wrong information--including errors that have not been repaired in over 30 years of publication)that I'd believe this if/when I see an actual copy. 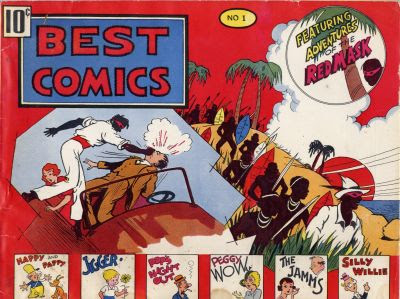 Most Golden Age comics are proof of the adage, "you can't judge a book by its cover." Few popular culture entities are as powerful as the comic-book or pulp cover from the 1930s. The glorious come-ons of these covers almost never mirrored the tepid, half-formed contents beneath their shiny, bright faces.

Would that any moment of Best Comics had a twinkling of the dynamism, pep and visual flair of this unsigned but unmistakable Jack Cole cover. Alas, its contents, formatted to resemble counterfeit Sunday comics features, could put any live wire to sleep within moments. 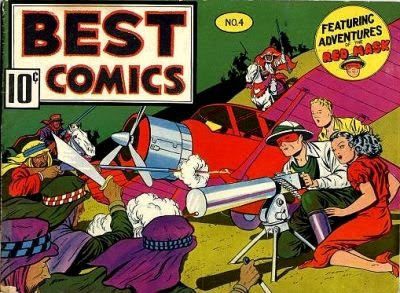 As one of our hero's first covers in the adventure/super-hero vein, this heretofore-unknown lump of Cole is a concealed diamond in thescattershot annals of early comic book publication.

Unless Cole did the covers for the other three issues of this short-lived title, I'd imagine this is his only landscape-format cover design. Cole makes impressive use of this unusual four-color canvas. I would imagine he had the contents of this half-baked issue described
to him on a penny postcard, hastily scrawled by the book's editor.

His depiction of THE RED MASK, a nicely-drawn but dreary sub-Phantom adventurer, hints at a bubbling excitement sure to stir any adolescent's heart. (Please note a very early "Female by Cole" at upper right corner of the cover. Cole had a long way to go before he would perfect the feminine form in his 1940s and '50s work.)

I quite like the orange-rimmed "cloud" that splits the two main action scenes of this cover. Cole made a habit of creating shapes in order toviolate them. In many of his covers and splash pages, strong geometric elements are judiciously placed so that human figures can bounce through, around, or over them. This is a simple but effective rough draft of Cole's developing flair for poster-like splash and cover schemes.

Delightful cartoon art rings these pulpy scenes of hot jungle action. Again, none of the actual renditions of these derivative humor features has a tenth of young Cole's zip and eagerness.

If Cole colored this cover, he did it well. The vivid figures sit on a bright yellow bed, accented with bold red. The blue modeling on the sailors' outfits provides an eye-catching contrast to the brighter primary colors that dominate the page. The odd glob of blue-green, atlower left, almost sabotages the cover's carefully balanced design. Because of the circles and diamonds that contain the book's backup features, this patch of blue doesn't detract from the overall effect.

Best Comics was a bust. Its publisher, Nedor/Better/Standard, rallied to become a major second-string comics publisher through the 1950s. While the content of their comics was seldom of interest, the company attracted a series of talented artists--of which Jack Cole was the first.

Judging from the small graphics of the other 3 covers, courtesy of the Grand Comics Database, it would seem that Cole's art only graced the second issue. 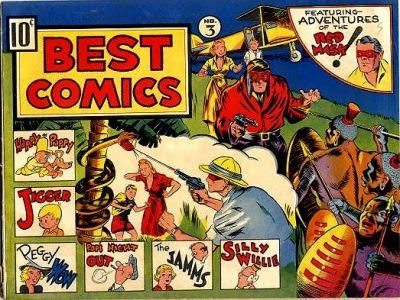 If anyone has access to the other three issues of this title, and can inspect them for possible traces of Cole, please contact Cole's Comics!