American comic book sales boomed during world war two as cratefuls were shipped to American G.I.'s overseas. Comic book publishers like Quality altered their content to appeal less to the kiddies and more to the soldiers. PVT. DOGTAG was one of a fleet of comics about inept soldiers. From SAD SACK to BEETLE BAILEY, the concept was enormously popular. 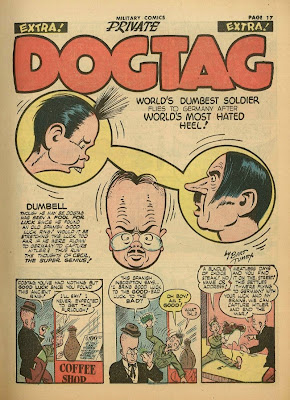 Jack Cole was one of the few top comic book artists in America who wasn't called up to serve in the military effort. As such, Cole had all the work he could take on. And take it he did, perhaps building up a cash reserve in case he was drafted. This was the year PLASTIC MAN got his own book, with Cole penning virtually every page of the first three issues. I don't have a year-by-year page count (yet),but it's quite possible that Jack Cole produced far more pages of comic book stories in 1944 than he did in any other year of his career.

As part of his extra work, Cole created three PVT. DOGTAG stories in the pages of Military Comics 29, 30, and 32, also returning to his 1941 series DEATH PATROL in the same run (see postings on Death Patrol here).

Military Comics #32 cover (not by Cole) 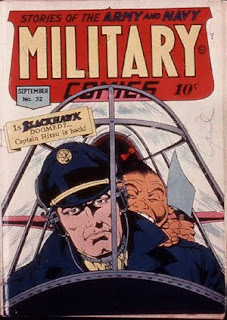 Thus far, I've only been able to locate one of Cole's PVT DOGTAG stories, in a muddy microfiche scan. I've cleaned the pages up as much as possible. If anyone out there can provide scans of Cole's work in Military Comics 29, 30, or 32, please send and we'll post them here.

An inventor himself, Cole loved to build his stories around fantastic machines. Early in his career, he created a character called DICKIE DEAN, BOY INVENTOR and made several stories about him (Silver Streak Comics). In this story, Cole creates a "knowledge exchange machine," and mayhem ensues, of course.

Another theme that occurs throughout Cole's work is that of shapechanging, or altering one's face and identity (see posts on this theme here). In this story, a Japanese general effortlessly (and somewhat needlessly) transforms himself into a "high born Chinese lady."

It may be the poor quality of the scans, but not much in this story makes sense. It doesn't seem to matter. A dark undercurrent of outrage and retribution against the Japanese runs like a river through the twisting and winding plot.

The writing and artwork is loose and, not surpisingly -- given how many pages Cole was churning out at this time -- feels rushed. This work feels more like a 1939 Jack Cole story than the polished gems he was creating by 1944. The whole story feels like a crazy dream, filled with resentment and a wish that the world was different. 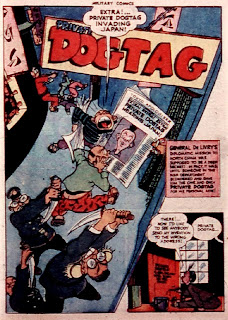 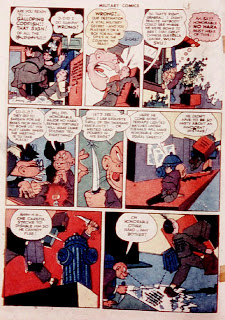 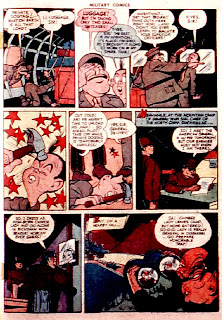 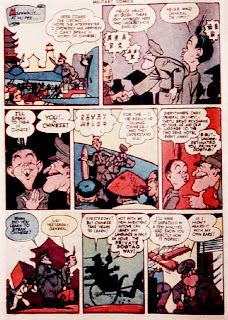 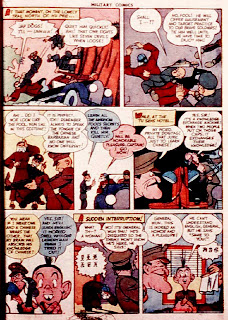 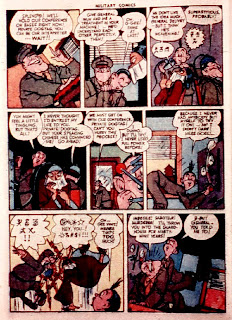 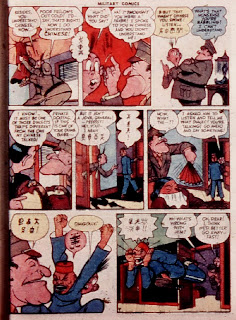 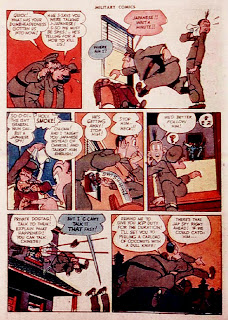 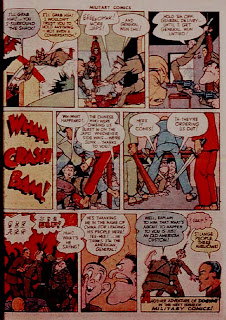