PLASTIC MAN 1949 - Is it better to be real and impotent, or fake and powerful?

After sporadic absences from the Plastic Man stories in 1946 to mid-1949, when he focused on getting his career as a magazine gag cartoonist off the ground, Jack Cole returned to his fertile laboratory of invention and delivered one more year of psychotic comedy.

By this time Jack Cole's art had reached the highest levels of sophistication within the form of graphic storytelling. Every panel was brilliant in the way it served up sight gags and yet propelled the story forward.

Neanderthal Man is one of the stand-out stories from that glorious last run, appearing in Plastic Man #19 (Sept. 1949 - Quality Comics). Cole liked this story so much that he even drew a special cover for it, a rare occurence as he more often would create generic covers unconnected with the interior stories. 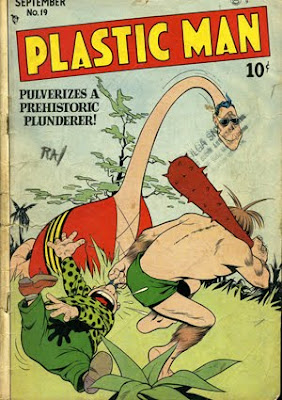 In this story, Cole explores the themes of virility and impotence, wholeness and fragmentation that would be the subject of so many of his 1950's Playboy cartoons.

He plays with this theme by contrasting the hulking, simple-minded, virile prehistoric "mountain of muscle" caveman with the astoundingly puny but brainy MR. FRAIL. Read on; more comments to follow. 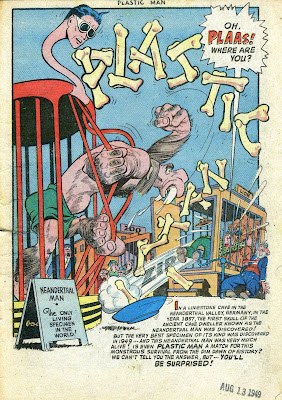 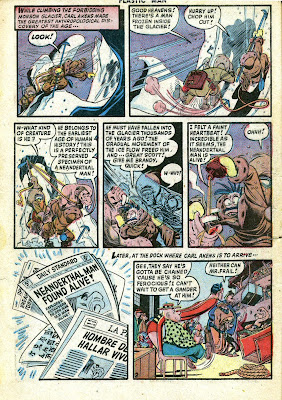 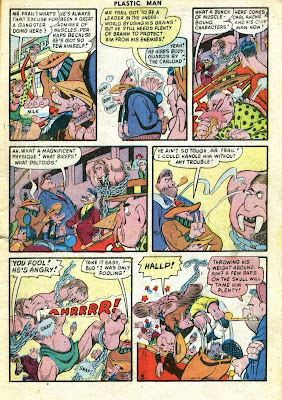 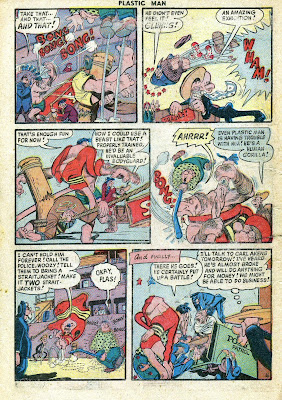 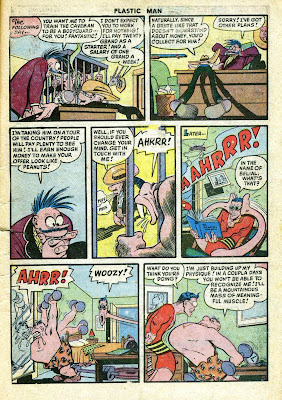 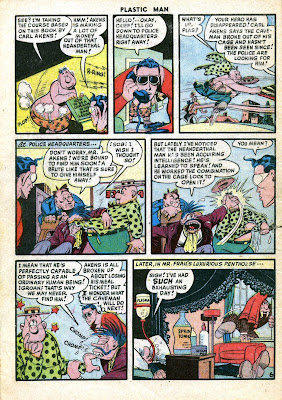 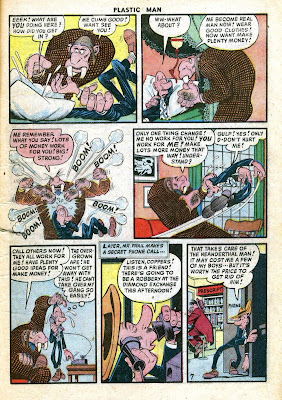 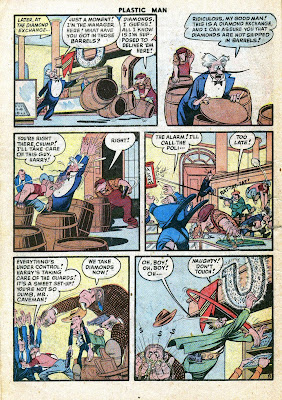 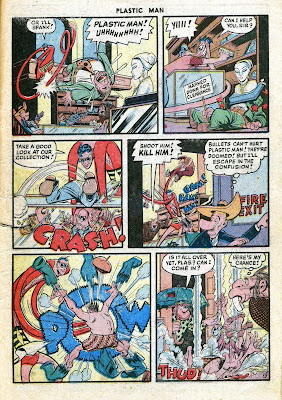 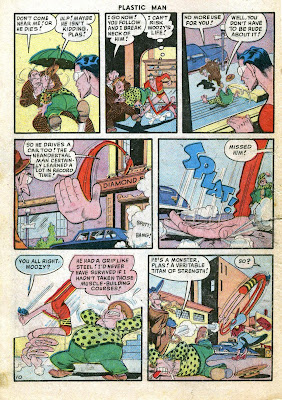 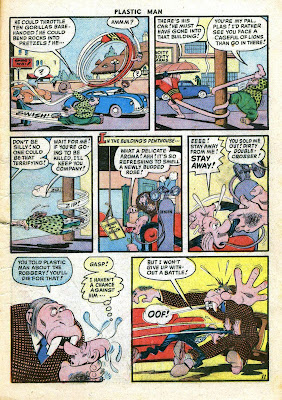 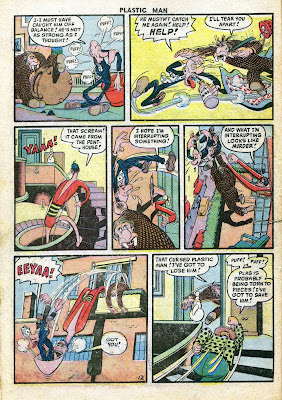 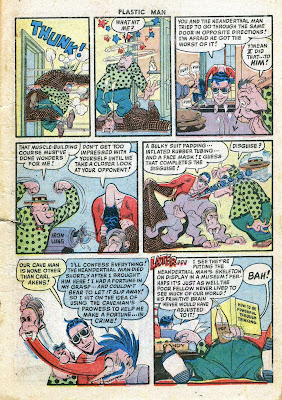 Plastic Man has no wife or children. We never see his mother or father, and don't know if he has sisters or brothers. He is completely and totally alone in the world, similar to the alien from Krypton, SUPERMAN. After the first year or so of his crime-fighting life, Plastic Man abandons his alter-ego, Eel O'Brian.

And yet, he is the most whole character in the stories. The only sane person in world of good and evil lunatics.

So many of Cole's stories are about characters trying to improve their lives by changing forms. As we are exploring in this blog, shapeshifting was perhaps the central theme of Jack Cole's graphic stories.

The character of the artic explorer/hustler CARL AKENS has, of course, changed his form into the neanderthal man. But he can't maintain it. Eventually, he finds it necessary to don a delightfully ridiculous suit (which reminds me of John Stanley's BADDY from his MELVIN MONSTER stories) and allow the fake caveman to suspiciously become a little smarter. As he does this, the flacid MR.FRAIL fights for his life and discovers the caveman is not as strong as he should be, and Carl Aken's desperate scheme unwinds.

This breathlessly told story of the appearance of power (Akens) vs. actual power (Plastic Man) is told in an astounding series of funny and inventive images. Plastic Man is stretched and shaped into so many things in this story that it's dizzying.

In the world of Jack Cole's comics, it is only Plastic Man that is allowed to shape-change without negative consequence. In this story, Cole distorts Plas more than ever, perhaps to counterpoint all the phony shape-changers.

Even good old WOOZY WINKS attempts to change his form through body-building. As he often did, Cole could have brought one of his sexy women on stage to swoon over the muscular caveman, but he doesn't because his focus is on sorting out what true strength is in the world at large, not just as it plays out in sexual politics.

In the end, it is fat, lazy Woozy who defeats the bad guy. After discovering the caveman sham, Woozy is back to his rotund, indulgent self and the message seems to be a less potent but authentic self is powerful enough when faced against fake virility... or something like that. My head hurts! Till next time, fellow Cole -miners!
Posted by Paul C.Tumey
Email ThisBlogThis!Share to TwitterShare to FacebookShare to Pinterest