I'm delighted to share with you this wonderful story, recently sent to me by fellow comics scholar and Jack Cole-miner, Darryl Aylward. Darryl writes that he strongly believes this story was drawn and perhaps written by Jack Cole.

I tend to agree, and will share some thoughts on that. But first, take a look for yourself: 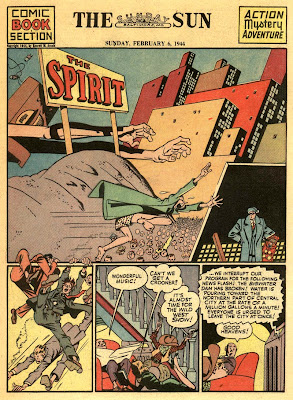 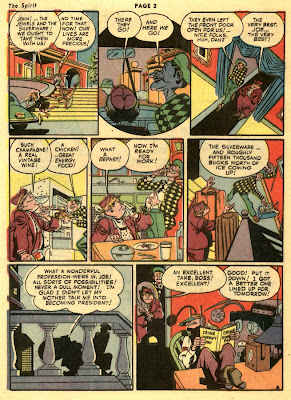 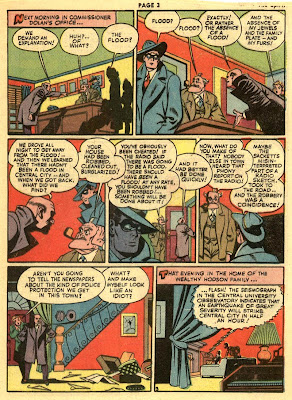 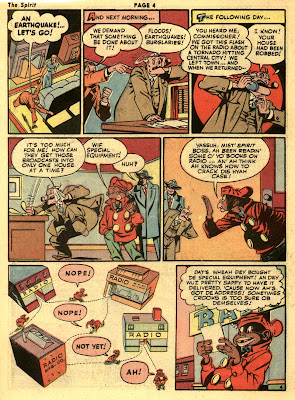 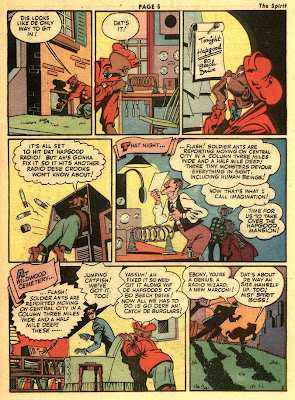 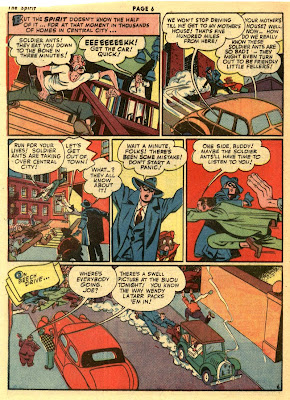 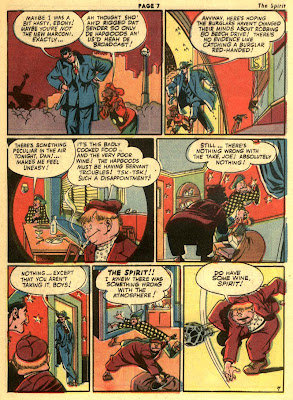 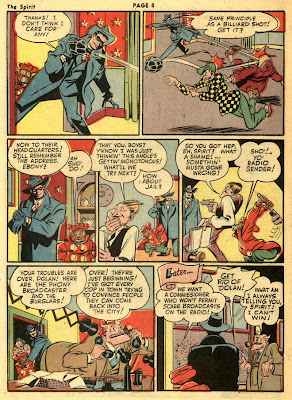 Welcome back.
Jack Cole ghosted for Will Eisner while he served in the military during World War II. It's known that Cole wrote and drew the "Fannie Ogre" sequence in the mid-1943 daily SPIRIT comic strip (which we'll publish in a future posting on this blog!).
According to comics publisher, scholar, and SPIRIT expert Cat Yronwode's research, Jack Cole wrote and pencilled some of the Spirit Sunday Section stories from December 19, 1943 (section number 186) to Aug 13, 1944 (section number 220). See Yronwode's checklist, here.
The date of the SPIRIT story posted above, February 6, 1944, fits within this framework, increasing the probability that Jack Cole wrote and pencilled this story.
I shared this story with my lifelong friend and fellow comics scholar, Frank Young (check out his groundbreaking blog on John Stanley, Stanley Stories), and here's what he had to say:
Just read this... it's definitely Cole's writing... looks like his pencils. The crook characters have that kooky Cole look. The second panel on page one, the frantic physical action in the splash page, Dolan's fatalism at story's end, Ebony's Woozy Winks-ish actions, and the fact that the story is actually clever, readable and amusing all point the way to Mr. Cole's involvement.
I wish he'd done the finishes on the pencils. Robin King and/or Joe Kubert probably provided the inks. The look is just too slick--it takes away from the vitality of Cole's artwork. Still, it's a fine story. Eisner could have done no better.

I totally agree with Frank's points, and sentiment. I've read (and re-read) most of the Eisner SPIRIT stories, and I must say this one ranks as one of the funniest and most enjoyable SPIRIT stories I've ever read, to my surprise. Giving one of the crooks a gourmet obsession with stolen food spices up (pun intended) the standard generic SPIRIT petty thief.

And this panel made me laugh out loud: 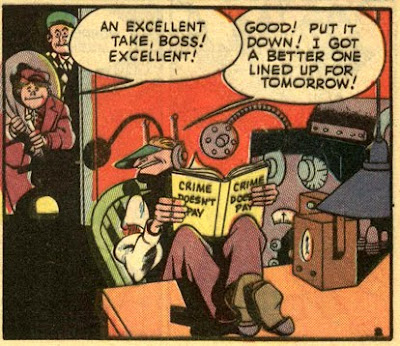 It's genuinely funny that the sanguine criminal mastermind who has just pulled off a sucessful crime is kicked back reading a book called "Crime Doesn't Pay." This could also be a rare in-joke by Jack Cole, as this was also the title of a popular comic book, edited by his old pal from the Harry Chesler shop days, Charles Biro.

This story is filled with Cole-isms. For instance, the last panel of page 5 features our heros silouhetted in a profile of left-to-right movement against an enormous full moon, a visual motif Cole often used.

The panel also shows THE SPIRIT and EBONY's shadows on the grass, also a farily common visual device in Cole's pre-1945 work.

The similarity in brushwork between the 1941 Midnight panel and the panel from this 1944 story seems to suggest that perhaps Cole had a hand in inking part of this story, as well. It would be difficult to indicate this effect in pencils, which is mostly achieved through short brushstrokes. 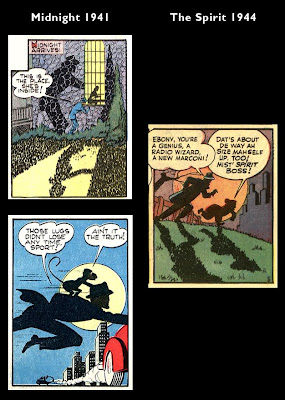 Another tip-off that Jack Cole pencilled this story is the expert use of bold pattern as a design element. Jack Cole loved to visually enrich his comic book pages with colorful, high-contrast patterns. Perhaps his most famous use of this visual trope is the black polka dots on WOOZY WINKS' green shirt. Here is an almost random selection of stories from early 1944, when this story appeared:

This concludes my own thoughts about this story. Thank you, Darryl, for finding and sharing this story. What do YOU think about the SPIRIT story in this post, dear reader, is this Cole?