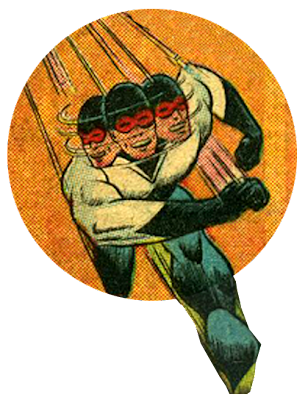 How do you show three-dimensional movement at high velocity in a two-dimensional context?

Or, minus the five-dollar words, how do you show speed on paper? That's a question that seems to occupy Jack Cole's mind in the early and, to a lesser degree, middle years of his career as a graphic storyteller. A great deal of his comic book work from 1939-1950 has speed both as a concept of the story, and a quality of the pacing itself. Cole's stories zip, screech, and zoom through ideas and innovations like no other, and it's one of the things that makes Cole great.

Jack Cole didn't create the character of Quicksilver, but he easily could have. Just a year or so earlier, he created another silvery speedster, THE SILVER STREAK, as well as THE COMET. Both heroes drew their power from whirlwind speed.

The "laughing Robin Hood," as Quicksilver was often called, debuted without an origin story in National #5, and ran for eight episodes before Cole turned in the one and only story he would make with this character. The primary artist on the series was the great Nick Cardy, but Cole's story is the stand-out in the series, which stayed a 6-page backup feature through 1949.
Poor Quicksilver never had an origin story or civilian identity. It hardly seems to matter in Cole's story. Aside from the greatest PLASTIC MAN stories, this dense six-page story may be the most perfect and pure expression of a Jack Cole superhero story. The words and images are perfectly melded together, the characters are lively and well-realized, the action is breathless and bizarre, and -- of course -- the level of invention in showing speed on paper is unsurpassed.
In comparing the earnest but grimly moralistic tone of his earlier superhero creations, THE COMET and SILVER STREAK, one sees the emergence of a sense of humor, and a decision to treat the idea of fighting crime as an absolute absurdity in itself, rich with irony and subtext -- a new direction that would result in the creation of Jack Cole's satirical and slapstick masterpiece, PLASTIC MAN, which would debut just one month later.
A word about about digital restoration. In some cases, it seems a good idea to take raw scans and alter them so they are more readable. The original work is treated with great respect. The biggest alteration we make to the pages is the replacement of the background paper, which is often discolored and has the reverse-side printing bleeding through. In the example below, you can see an example of what, hopefully, you will agree is an improvement. On this page, in addition to restoring the background paper, the areas of the title and the target were touched up. 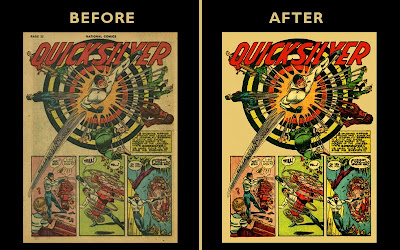 It's too bad Jack Cole only made one Quicksilver story. On the other hand, it's a terrific story. Enjoy! 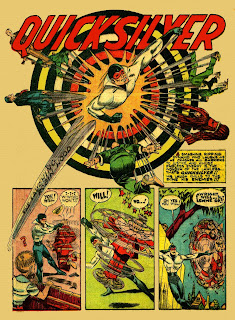 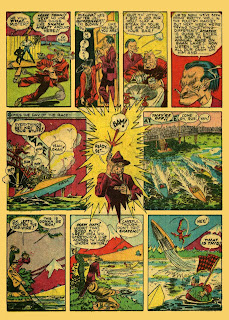 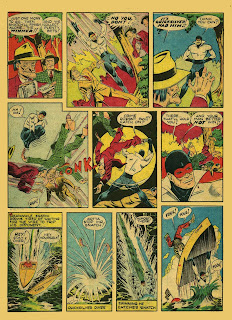 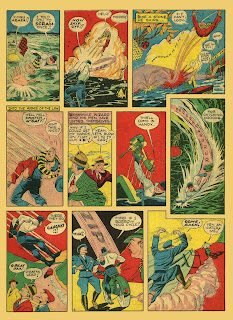 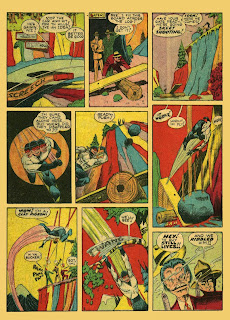 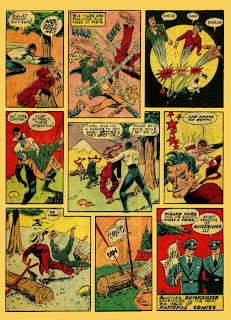