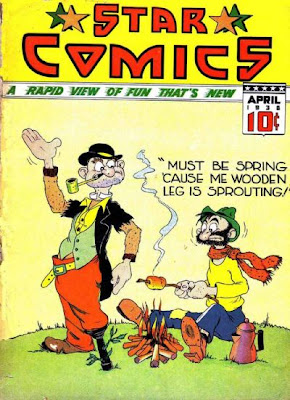 The Grand Comics Database lists the above cover of Star Comics Vol.1 #11 (April, 1938) as being by Jack Cole. If so, this would make it his first published comic book cover, as far as we know!

There are a few reasons to think this is Cole's work. First, we know he worked for Centaur during this time. In fact, the Grand Comics Database issue details tell us that the book leads off with a feature called KING COLE'S COURT, a feature that Cole wrote and drew (note the self-reference in the name). It's reasonable to think that, if Cole had work inside the book, he could have also drawn the cover.

Also, there's the bottom of the shoes in the artwork. Cole seemed very fond of drawing shoes and feet from the bottom.

However, it seems to me the artwork lacks Cole's typical thick outline around the outer edges of the figures, a strong characteristic of his early work.

For comparison, here is a Centaur cover from one month later, Star Ranger #12 (May, 1938). This terrific cover is generally thought to be Jack Cole's first comic book cover. This one is signed, so we know for sure it's Cole. Note the heavy outlines of the figures. 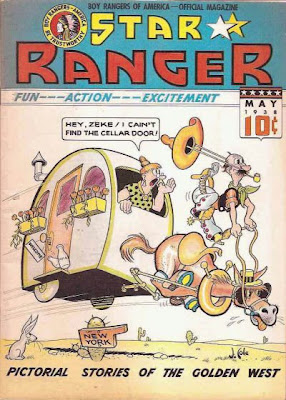 My best guess is that the cover in question is by someone other than Jack Cole. Perhaps Fred Schwab.

What do YOU think, dear readers? Is this Cole?