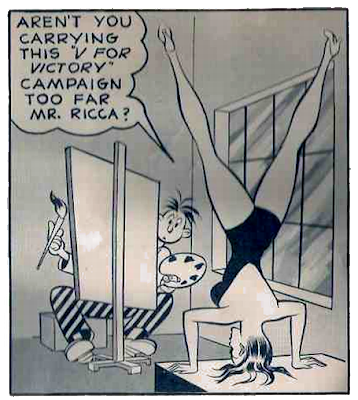 On the inside front cover of a crude, crappy digest-sized one-shot publication we have an unsigned 1-panel gag cartoon (above) that I think could very well be the work of Jack Cole. What do you think? 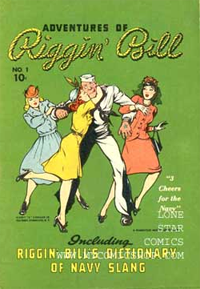 First, let's look at the historical facts. The book, which was published by the Remington Morse Company, has a statement inside (shown above) that it was created and produced by the Harry "A" Chesler Jr. shop. Chesler ran a small group of comic book creatives and produced whole books that were then sold to other publishers. he was the first to create this arrangement, which was quickly replicated by others, including Will Eisner, Joe Simon, and Jack Kirby.

Cole's first comic book work when he moved to New York city with his new bride in 1936 was with the Chesler shop. It was through Chesler that Cole worked on Silver Streak, as well as numerous other short pieces and one-pagers. So there's a strong connection.

The book itself, The Adventures of Riggin' Bill #1, has no publication date. A page on the inside includes the phrase "remember Pearl Harbor!" so we can assume it was published between December, 1941 (when the Japanese bombed Pearl Harbor and started a war with the United States) and 1945 (when the war ended).

During this time, Cole worked primarily for Quality Comics, having moved on from the Chesler shop. From 1942-44, Harry Chesler joined the American military and his output of comic books ground to a halt. He did, however, create several ten cent digest-sized books, such as this one, intended primarily for a military audience. After all, it was well-known the "A" in Harry "A" Chesler stood for "Anything."

Did Chesler call up Cole and ask him for a gag panel for a wartime book he was creating?

If not Chesler, perhaps it was Gaspano "Gus" Ricca, art director at Remington Morse that bought the cartoon from Cole. Ricca, a comic artist himself, created a fine series of bizarre and macabre covers for Chesler books such as Dynamic, Scoop, and Punch.

Take a look at the one-panel gag cartoon at the top of this posting. The lovely girl model is addressing the painter, a "Mr. Ricca," who can only be the art director, Gus Ricca. We know that Ricca became an art director at Remington Morse, and the Chesler shop around 1945, so it's likely the date of this cartoon is circa 1945.

However, Chesler is famous for creating new titles stocked with material he had previously published. I wonder if perhaps this cartoon was either published somewhere else earlier, or if maybe it was a "warm-up" Cole did one day while working in the Chesler shop, only intended as amusement for the office, but nonetheless collected and saved by the shrewd Chesler. We'll never know for sure, but it's fun to speculate.

It makes sense for Cole to have drawn a sexy gag panel, as he regularly supplemented his comic book income with beautiful ink wash one-panels he wrote and drew for various men's magazines, including the digest-sized Humorama line.

So much for the historical evidence supporting Cole's authorship of this swell gag cartoon.

Now, let's consider the art itself. There are a couple of tip-offs that this could be Cole.

First off is the sexy woman. Cole could draw alluring females better than almost any other cartoonist of his time. The woman in this panel stikes me as being exactly the type of female Cole did so well. Plus, there's something about the way the woman's hair is drawn here, that seems particularly Cole-like.
Also, Cole often used simple patterns as an art element in his art. Consider the striking use of the black-and-white striped prison uniforms in his DEATH PATROL series in Military Comics. In this cartoon, the painter is wearing boldly striped pants.

Cole's work often distorted shapes. Especially squares and rectangles. Here. in the shapes of the window and the drawing board, we see the artist has distorted them, making them seem more visually interesting, and comical.

All in all, if you'll pardon the pun, it's not a, ahem, stretcher to say this is a previously uncredited (as far as I know) gag cartoon by Jack Cole! What do YOU think?
Late-Breaking News!
We just recieved an email that sheds more light on this Jack Cole mystery from Ger Apeldoorn, TV writer and comic book historian. Be sure to check out Der's incredible blog, The Fabuleous Fifties.

Here's Ger's email:
"I can't seem to comment on your excellent blog. Here's my comment to your latest post:
I have several more cartoons in this style and from this period from a similar Chesler produced book on my blog. My guess is Chesler tried to syndicate war related cartoon material to (army) newspapers and got Cole to do a few as well."
Here's a link to Der's excellent posting: http://allthingsger.blogspot.com/search?q=chesler
In this post, Ger provides some great information and 3 more one-panel gags that he attributes to Cole, from Myrth of a Nation, another Chesler-produced digest magazine aimed at a military audience, including this beauty, which is very similar to the gag cartoon at the top of this posting: 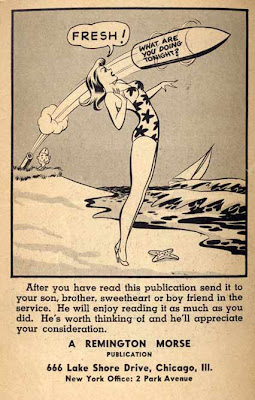 And here's a color cartoon from the interior of the book. Note that "Jake" was also one of the pen names Cole used for his pin-up cartoons for the Humorama line. 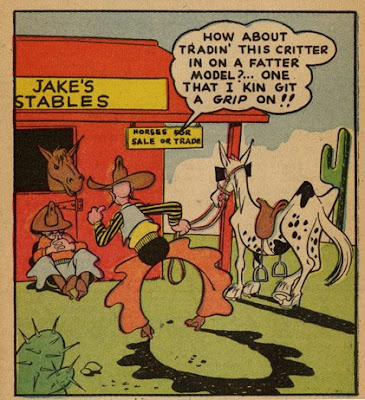 There's one more gem from the Cole mine waiting for you at Ger's wonderful blog here. With these additional finds by Ger that are cetainly Cole's work, I think we can safely say the cartoon at the top of this posting is, indeed a Jack Cole cartoon! Thanks, Ger!
Posted by Paul C.Tumey
Email ThisBlogThis!Share to TwitterShare to FacebookShare to Pinterest