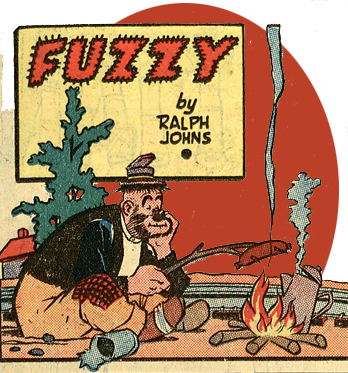 In Plastic Man #3, Jack Cole introduced two new characters destined to populate one-page fillers only. One was CUTHBERT (see our post here), and the other was a happy, inert hobo named FUZZY.

Jack Cole dropped CUTHBERT after only three entries, but he stuck with FUZZY for at least six episodes. The first was signed by his oft-used pen-name, Ralph Johns. The rest were unsigned, but are clearly Jack Cole's work (except for the page from Plastic Man #5).

FUZZY is a likeable character, but the pacing seems off, somehow. Perhaps because it is about the misadventures of a lazy bum that, for once, Jack Cole created a comic strip that was slow-paced and meandering.
Nonetheless, there is some great drawing, such as the foreshortened figure of Fuzzy in the second panel of the first page. Plus, Cole creates some strange moments to savor, such as when Fuzzy pulls up his shirt to reveal a bed of petunias growing from the dirt there! Or when he removes a fluffy mattress to be able to sleep on the uncomfortable bed rail. A truly strange and therefore entertaining fellow, FUZZY wuz. Enjoy! 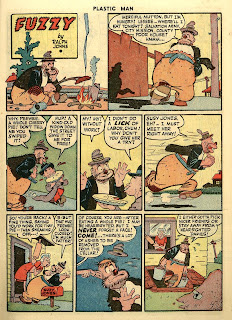 Plastic Man #5 (Autumn 1946, Quality)
My dear friend and fellow comics scholar Frank Young, has created a wonderful blog, Stanley Stories, which is a rich study of the work of comics legend John Stanley. Frank points out this page was drawn by -- or at least inked by -- Bart Tumey. Tumey, along with Alex Kotzky and John Spranger, provided art assists on some of Jack Cole's Plastic Man stories starting in 1946. Although he is not known to be a direct relation of mine, I do get a little thrill to know I share a surname with an artist who worked with the great Jack Cole! 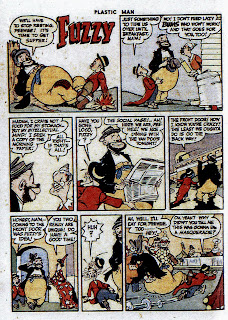 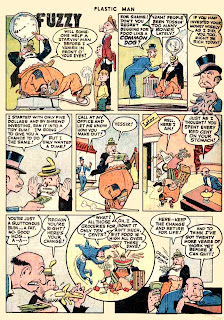 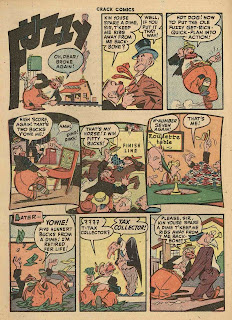 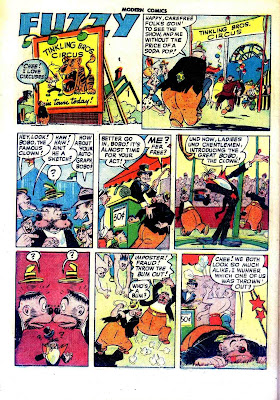 National Comics #69 (December 1948, Quality)
In this late episode, Cole published a FUZZY page in National Comics, a title in which he had regularly published a one-pager called WINDY BREZZE for about 50 or so preceeding issues. In this episode, Fuzzy cons somone into helplessly weeping in sympathy for him, a favorite story element he used to great success in the famous PLASTIC MAN story, "Sadly Sadly," among many others. This one-pager was Cole's last appearance in National Comics, which ended with issue 75.