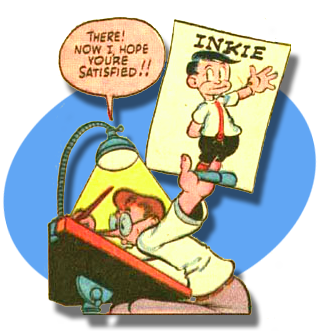 One of the inventions that made Jack Cole unique among golden age comic book artists is that he occasionally wrote and drew himself into his own stories. In Silver Streak #5 (July, 1940, Your Guide Publications), he directly and passionately addressed his readers as Ralph Johns. His self-portait here is positively heroic. 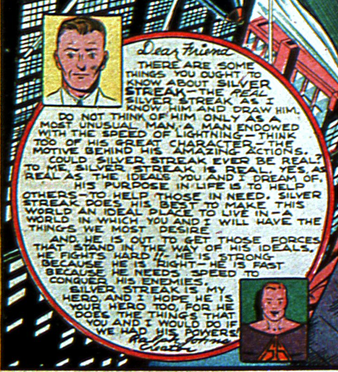 In Police Comics #20 (July 1943, Quality), Jack Cole becomes not only the creator of the PLASTIC MAN story in that issue, but also a character in it. He retains the white shirt and tie from his previous Ralph Johns self-portrait, but now he is comically bug-eyed, chinless, and stutters. 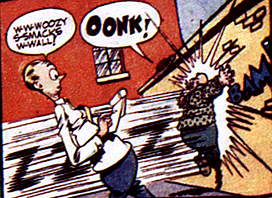 About a year later (all 3 of these self-portraits were published in the summer months. Perhaps the hot weather made Cole more reflective), Jack Cole wrote and drew two wonderful eight-page stories in Crack Comics #34 and #35. featuring the character of Inkie. 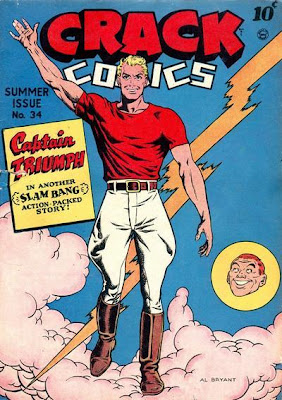 Created and most often written and drawn by Quality staffer Al Stahl (who also worked on DEATH PATROL after Cole left it), the premise of this back-up series was that the disturbingly neotonous, pre-Big-Boy Inkie would cutely emerge from the two-dimensional world of the comic book page to save his creator from dire straits.

It was a sort of reversal on the famous Out of the Inkwell cartoon series created by the Max Fleischer Studio (and available as extras on the recently released amazing Popeye DVD sets), in which Koko the Klown would climb off the animation board and mischieviously wreak havoc in the three-dimensional world of his creator.

Unfortunately, the Crack Comics version of this concept was not nearly as entertaining as the Fleischer cartoons. Except, that is, for the two Inkie stories Jack Cole wrote and drew in 1944.

Cole was bound by the concept to draw himself into the story, and he delivered his most lively, funniest self-portrait in this little-seen gem. In this 1944 version of himself, Cole still wears the crisp white shirt and tie. He now has big round glasses, a long, pointy nose, and has lost the stutter.

In this story, Cole portrays himself as a sort of grumpy comic book Shiva. Just as the Hindu god unceasingly dances to create our reality, Cole continuously writes and draws the action as it happens. He is comically interrupted by a lisping editor who demands that he insert Inkie into the story earlier. It may be that the editor is a parody of one of the Quality editors of the time, but this is not clear. Just as he is a powerful creator in this story, Cole is also eventually dominated by the overbearing editor, tearfully drawing his beloved Inkie into a closed safe.

The story keeps jumping from "their" world to "ours," with a fluidity and dizzying stack of meta self-references that is truly stunning. Cole had some kind of mind.

It all feels like a weird lucid dream on a hot summer night.

A very special THANK YOU to our Cole-ossal reader and comic book expert Darryl Aylward in Australia, who has generously sent in these scans. In fact, Darryl has provided some other rare Cole material, which we'll be sharing in the coming weeks. My heartfelt thanks, Darryl!

I hope you enjoy this sparkling gem rescued from the dust-bin of history by a fellow Cole-miner. 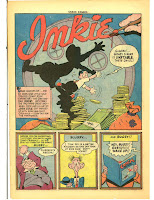 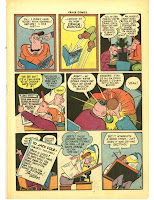 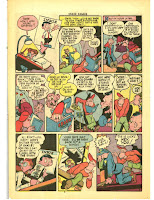 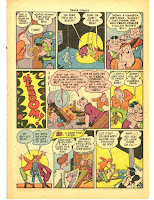 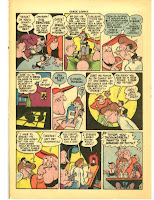 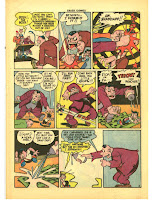 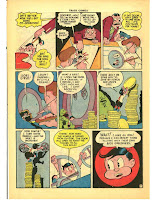 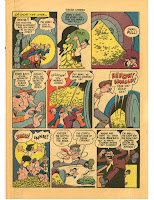