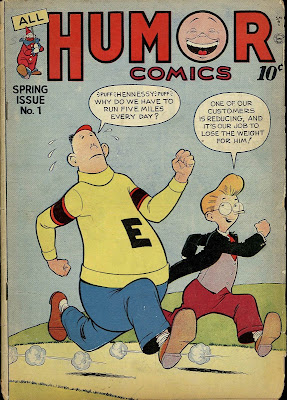 Jack Cole's delightful cover feature for the inaugural issue of Quality Comics Publications' All Humor Comics is a standout in every way: writing, art, and a heady brew of Cole's pet themes of identity and infantilism.

Perhaps inspired by the fact that he was creating the lead feature for a brand new title, Jack Cole rose to the occasion, creating two of his most likable and charming characters, HENESSEY P. EGGNOG and ELOISE. The comedy duo functions as a sort of Laurel and Hardy, or George and Lennie (from John Steinbeck's 1937 novel Of Mice and Men), with Henessey ostensibly being the brains and Lennie the brawn of the outfit. Part of the joke, of course, is that Henessey isn't as smart as he needs to be, and the hefty-sized Eloise (who wears a sweater with a big 'E" on it) is a soft-hearted sweetie, eager to please.

Jack Cole's character design of Henessey is very similar to his self-depiction in an INKIE story he made roughly two years earlier, in Crack #34 (see our post on this story here). 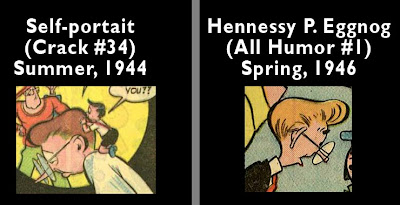 Henessey is considerably more upbeat in his personality than the INKIE version of JACK COLE. Perhaps this is just because he is not an overworked, editorially controlled artist. In fact, ODD JOBS, INC. is a picaresque concept that is filled with open space and freedom. One gets the idea these characters could do anything anywhere. It's really too bad that Cole did not do more stories with this concept and character.
The story opens with a breathtaking, Will Eisner/SPIRIT style splash page that is a repeat of an earlier, equally impressive PLASTIC MAN splash page Cole created about two and half years earlier. Jack Cole manages to top his earlier virtuoso effort by making the All Humor splash even funnier, with a good half-dozen solid jokes. 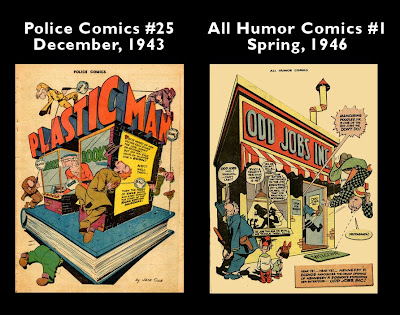 The humor in ODD JOBS, INC. is right on target, with expert timing and really great gags, such as the build-up of excitement at the crowd at Odd Jobs, Inc.'s opening day, only to find out they were only there because someone dropped a quarter. This sort of build-up and deflation is very much Kurtzman/Mad territory. I think Jack Cole, the human sponge, probably absorbed enough of the Jewish, Borscht Belt/East Coast sense of humor to make it a part of his 1940's comic book work.
As a sort of writerly rim-shot, Cole follows up the dropped quarter joke by having Eloise show keen, but misplaced interest in who got the quarter. This is funny stuff!
Aside from the top-drawer gags and character-driven humor, ODD JOBS, INC. is filled to the brim with some of Jack Cole's nearest and dearest pet themes. In the last panel on page two, we have a face and identity change (see our post, The Eel-like Slipperiness of Identity).
Not only that, but it's a child (a child with flat affect and disturbingly soul-less eyes, similar to the abused child in the great Plastic Man story from Police Comics #22, "The Eyes Have It") that transforms into a white-bearded senior. Eventually the senior gets infantilized in diapers. Cole played with this particular story element so frequently that it seems to suggest he was laying bare a part of his own psyche. There's often a serio-comic moment when the transformed character looks into a mirror and sees himself in a new light. Compare this moment in ODD JOBS, INC. with one of Cole's 1940 stories, the HIGRASS TWINS. 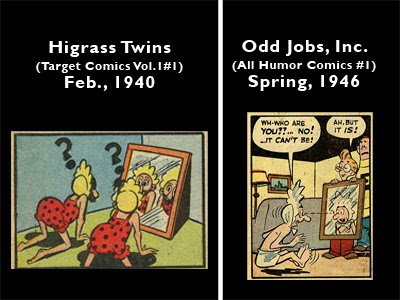 Before we get to our feature presentation, just a word about the efforts ye rapidly aging editor makes to get you the primo stuff.
Aside from all the perilous journeys to exotic and dangerous digital locales to locate these rare, practically unknown items, a standard is upheld in all this effort. In general, I try to find the best possible copy of the work I can. There are some items I'm sitting on because I don't feel the pages are of good enough quality to publish, even in a blog. But rest assured the search for presentable material is non-ceasing, machete is drawn, and pith helmet is donned at a rakish angle.
Aside from all this, you should also know a modicum of effort is invested in restoring the visuals for your reading pleasure. I am, after all, a graphic design professional. It's minor, but it can sometimes make a noticable difference, as in this example of the before and after version of the ODD JOBS, INC. splash page. 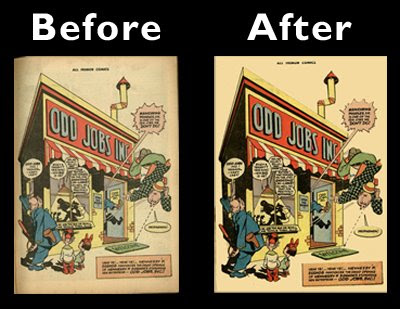 If anyone out there is enjoying this blog, it would be great to hear from you! I am such a jacked up Jack Cole fan that nothing could stop me from pursuing my obsession in this blog, but it would be a HUGE help to me if folks could write a comment now and then and let me know how I'm doing.
Fellow Cole-miners, what I'm trying to say here is that this is YOUR blog as much as mine, so let me know what you want to see, how it's shaping up, and you are all welcome to email me your own guest-postings!
This doesn't mean I am out of material to post. Not by any means! I have a two-page list of articles to write and rare Jack Cole material to share with you!
And now... here's ODD JOBS, INC., a true standout in the archive of lesser-known Jack Cole comic book stories! 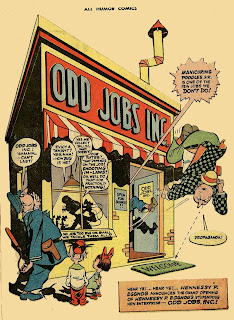 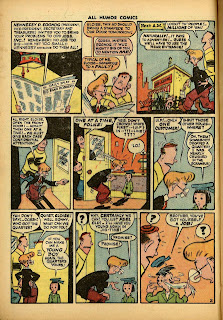 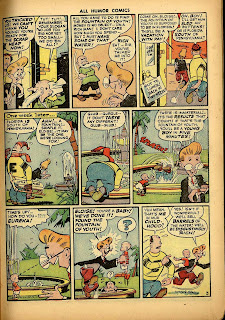 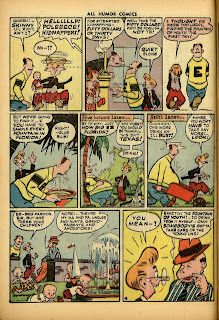 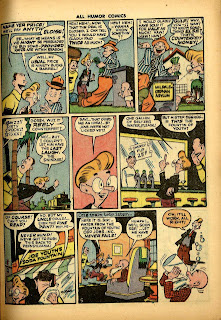 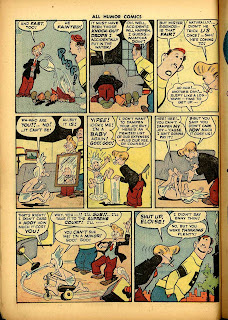