Today's Cole in your stocking consists of two rare "lost" Jack Cole cartoons from Collier's Weekly. Both cartoons are paper scans from my own copy of the September 2, 1939 issue which I acquired through several misadventures involving a verbose fat man, a fey killer, and a sexy but deceitful woman named Bridget O'Shaughnessy.

It must have been exciting for Jack and Dorothy (Dot) Cole, a struggling young married couple relocated to New York City from New Castle, Pennsylvania to have two cartoons appear in one issue of a major national magazine. By the time these sales saw print, though, Cole was already working at the Harry Chesler shop. For some examples of Jack Cole's 1939 comics, mostly published in Centaur titles, see this article.

Just by way of an interesting "bonus" tidbit, here's a record of Jack and Dot's marriage that appeared in a Greenville newspaper on July 21, 1939: 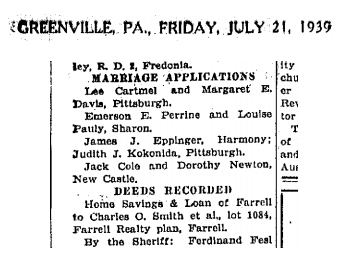 This is a bit of a mystery because, by all accounts, Jack and Dot were married years earlier. In fact, they kept it secret from their parents, at first, continuing to live at home. I wonder if they were getting married a second time, to allow the families to be involved. Or perhaps the stories about their earlier marriage are not quite right. I truly wish I knew. If I ever come into a windfall, I'd love to go to New Castle and talk to some folks there to find out the story behind this news item and flesh out the story of Jack Cole's early years.

In any case, in my imagination I can see Cole riding the subway in Manhattan, watching someone read a magazine with this cover: 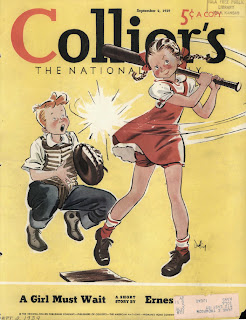 Or maybe he walked by newstands on busy New York streets in September 1939 that sported copies of the issue in which he had not one, but two cartoons. Newstands that looked something like this: 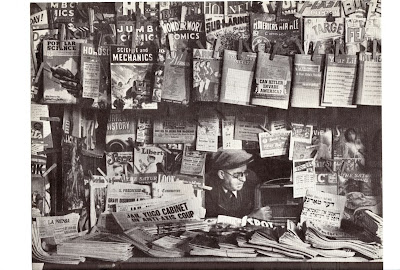 Looking at this photo, it's easy to imagine that maybe there was a comic on the stands as well that featured work by Jack Cole.

As previously documented in this blog, Cole had some earlier sales to Collier's in 1938.

The first cartoon of Cole's in the September 2, 1939 issue of Collier's appears on page 31, next to a bizarre Fisk tire ad that, for some reason, shows a man wrestling an alligator.

The cartoon makes a reference to the famous baseball star, Joe DiMaggio... a rare topical reference in Cole's work. Here's the cartoon itself, in a larger size:

I like how Jack's signature appears to be a part of the floor under DiMaggio's feet. We also see in this cartoon Jack's interest in showing agitated human movement -- not quite successful here, but still a good effort. By keeping Joe's back to the reader, Jack spares himself from having to draw a caricature of the celebrity, but also keeps us from tipping to the gag until we read the caption.

The second Cole cartoon, which features an even higher level of physical chaos, appears on page 50:

It's worthwhile to show you the entire page, as well as the individual cartoon, so you can get a sense of how much space the editors gave Cole's cartoon, and also to see how boldly his wash cartoons stand off the page. Part of Cole's greatness lies in his thoughtful design. We can see, just by looking at these two full pages, that his designs, with their strong lines and rich washes were very effective for catching the eye and adding visual appeal to the magazine's pages.

Here's a 1940 Boy's Life page in which Cole's plush, bold cartoon is a visual delight:

Cole would return to this lush visual formula in his Playboy and Jake cartoons of 1955-58, with great success. His 1955 cartoons benefit from the thousands of drawings he had made in the intervening years between 1939 and 1955, and therefore are considerably more successful and accomplished. However, the same basic design approach applies to both eras in Cole's career as a magazine cartoonist.

Here's the cartoon, in a larger size:

It's a great gag, and it lets Cole do what he does best -- show screwball energy on paper. There's something about the leaping-off-the-page energy of this page that reminds of this classic page from a 1942 Midnight story (shown here as a retouched page from my ebook, The Complete Jack Cole Midnight, Volume 2 -- available for purchase at the right-hand side of this blog): 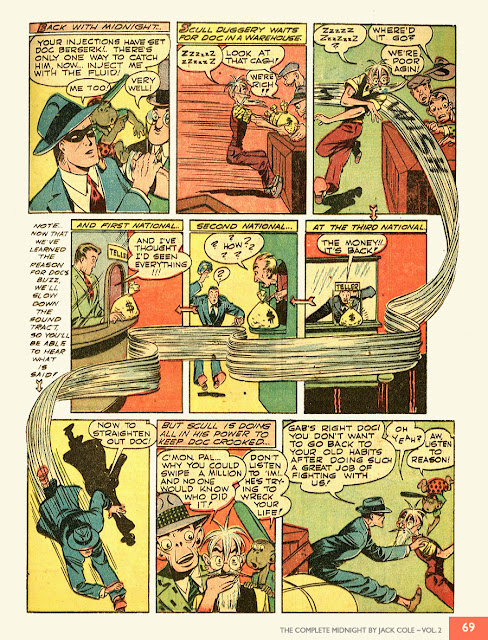 Even though he had a very promising start as a nationally published magazine cartoonist with top late 1930s markets like Judge and Collier's, Cole needed to make more money -- and that's why he veered into comic books, and began to devote himself to creating longer, sustained sequential graphic stories. At Chesler's walk-up studio, housed in a dank lower Manhattan warehouse, Cole at least drew a regular paycheck. In short order, Cole began to master this burgeoning new form. Just as his magazine cartoons show smart design, so do his comic book stories -- but that's a story for another day!

Check back tomorrow and the next day for the last two postings of my 12 Days of Cole-Miss event -- lotsa good stuff to come!

In the meanwhile, here's what we've done, so far: