A special holiday CHEER to our friend, writer, editor, and comics historian GER APELDOORN, for supplying today's Jack Cole finds. Be sure to visit Ger's Fabulous Fifties blog to see amazing comics and cartoons from the 50s.

One of the most significant discoveries to emerge from the multi-year research project this blog represents is that Jack Cole -- widely known as one of the masters of comic book stories in the 1940s --  had a lesser-known parallel career as a magazine gag cartoonist. When Cole left comic books in 1954 and found great commercial success as Playboy's signature cartoonist, it seemed like a miraculous re-invention of himself. In reality, what actually happened was more logically the fruition of years of hard work on Cole's part to develop himself into a valuable magazine cartoonist (and the good fortune to be in the right place at the right time). In fact, his first publications are not sequential graphic narratives in comic books, but rather one-panel gag cartoons that appeared in the pages of such nationally distributed magazines as Boy's Life (see here) and Judge.


It was something of a revelation to get the following 1936 cartoon from Ger Apeldoorn. All I previously had for Cole's published pre-1938 comic book work was the dozen or so cartoons he sold to Boy's Life, and the mysterious illustrated article on his cross-country bike trip (the original publication of this early article, possibly Cole's first publication, remains unknown -- see here for the article and here for details on the mystery). The following new Cole find originally appeared in the pages of the December, 1936 issue of Judge magazine. Check out that pig!


Once again, we see Cole working with hillbilly humor -- a favorite subject in his early work (check out these 1940s HiGrass Twins comic stories and his Slap Happy Pappy one-pagers). Note also that the signature Cole uses in this cartoon is different from any other signature he used in any of the known cartoons we have.

Most importantly, the discovery of this cartoon reveals how ambitiously and hard Jack Cole pursued selling his gag cartoons to the major markets. It was the very same ambition that drove Cole to relocate from his hometown of New Castle, Pennsylvania to New York City in the hopes that it would spur his cartooning career. And, so it did.

Even after Jack Cole became an established success in comic books with Plastic Man, he continued to write, draw, and submit cartoons to to the major markets. I suspect there are many more Jack Cole cartoons to be found in the pages of American magazines published in the 1940s and 1950s. Another wonderful cartoon from Ger is this pneumatic 1946 beauty, also from the pages of Judge. Here, we see Jack Cole developing his sexy girl cartoon chops, some 8 years before his Playboy success.


Where Cole's Playboy cartoons are more accomplished, with artful washes and graceful brushwork, this image is more controlled and rough-hewn. It appears that Cole may have used an airbrush for this work. If not, he is working hard to use washes to delineate light and form. This image (which also appears in Art Spiegelman and Chip Kidd’s top-notch book, Jack Cole and Plastic Man: Forms Stretched to Their Limits) --  created at the height of Cole's Plastic Man success, foreshadows the direction his career would take in a few years.

This 1946 Judge cartoon also harkens back to Cole's earlier work, as we can see in this panel featuring a similar image in stipple, from "Midnight Goes Hollywood" (Smash Comics #34, July 1942 -- available in my ebook, The Complete Jack Cole Midnight Volume Two, for sale at the right side of this blog). 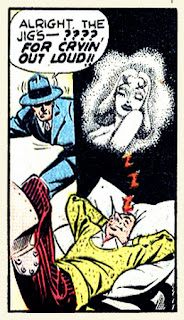 In 1944, we find the sex-laden Pvt Dogtag stories. Yesterday, I shared a new Dogtag story, which features the following panels of feminine pulchritude:

It seems that drawing cutie-pies was a prime interest for Jack Cole -- and who could blame him?

Judge Not, Lest Ye Be Cartooned,
Eel O'Brian