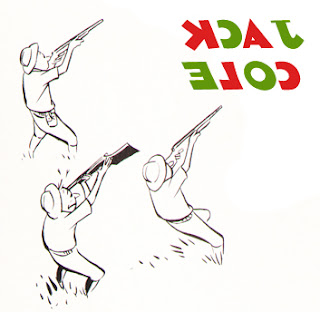 Here's two more previously unknown Jack Cole gems! These both appeared in the pages of 1955 cartoon and joke digests published by H-K Publications. These digests are filled with sub-par cartoons. Cole's elegant, offbeat cartoons stand out from the pages of these bottom-tier pulps like M&Ms in trail mix. It seems that H-K bought a lot of material from Bill Wenzel in 1954-55, including painted cartoons for their covers. Wenzel's work is competent, and times has a certain something. Aside from Wenzel, the remainder of the H-K stable of girlie gag cartoonists have little to offer. Here's a cover by Wenzel:

Behind this cover, from March, 1955, we find this Jack Cole beauty -- a paper scan from my own collection:

This is hardly the subject matter Wenzel cover leads you to expect to find inside. In fact, one of the delights of Cole's H-K cartoons is how a great number of them have diverse subjects and situations -- almost like they were done for other others and then  -- after rejection -- sold here, to an editor who knew quality when  she or he saw it.

It bears noting that the above cartoon is yet another example of Jack Cole depicting suicide in his work. It's also worth noting that the layout is similar to the cartoon I shared yesterday. Here it is again, for a quick comparison: 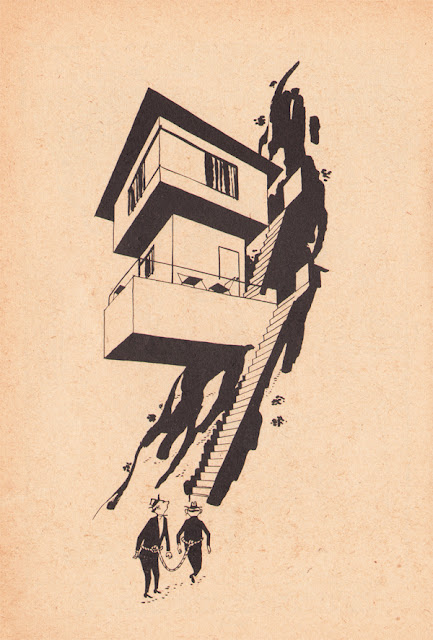 Both cartoons are caption-less and show tiny people facing something large and daunting, perhaps the way Cole felt at shifting gears in his career. In both cases, you first see the huge object -- a house, or a charging elephant -- and then you peer at the diminutive figures and see the jokes. This creates a clever, delayed-effect reaction that stretches the gag out, and encourages you to look closer and perhaps reflect for a moment.

The elephant cartoon from the March, 1955 issue of Smiles is one of an incredible nine cartoons in that issue by Cole. I'll be sharing the rest of this lot over the next few days. It is interesting to observe that the March, 1955 issue of Smiles sister publication, Mirth, featured 12 Jack Cole cartoons (see them here)  -- both issues presenting 21 Cole gems in one month!

I must confess that the joke is lost on me. The only sense I can make of it is that the woman in the balcony seat is pleased that she has drawn attention from the performance to herself. The name, "Dagsted," is confusing, too... being a mysterious compression of Dagwood Bumstead's name. Perhaps there's a cultural reference to the name that would explain the gag. The cartoon looks a little naughty at first, before you read the caption, since it looks as if the people in the upper seats are peeing on the folks below!

The 12 Days of Cole-Miss Postings So Far:

Only 1,099 more shopping days until Xmas 2015,
Paul Tumey
Posted by Paul C.Tumey
Email ThisBlogThis!Share to TwitterShare to FacebookShare to Pinterest